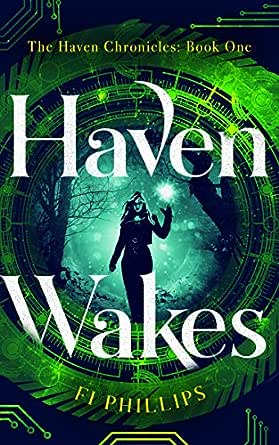 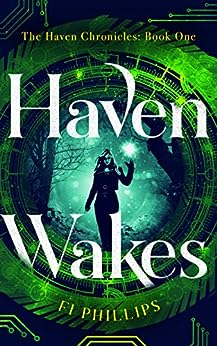 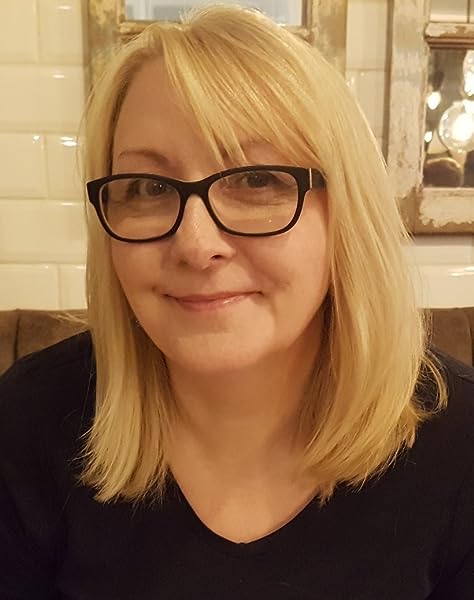 What if we lived in a world where hidden cities lie just beyond the next door, hidden in plain sight and guarded by mystical creatures?

An eccentric stranger with the ability to summon doorways out of thin air.

A strange girl with powers no one understands.

A world of magic… and robots.

When Steve Haven’s uncle dies, Steve finds himself the guardian of a strange artefact known only as the Reactor. But there are people out there who want the Reactor; dangerous and powerful people.

With his parents missing and no one in the normal world he can trust, Steve must join forces with a strange collection of magical beings to save the world by stopping the Reactor from falling into the wrong hands.

What is the truth behind Rex Haven’s death?

What is the secret behind the Reactor and its power?

Do the answers lie in the magical land known only as Darkacre?

Haven Wakes is the debut novel by Fi Phillips and the first in The Haven Chronicles, an exciting and enthralling journey through new worlds, both futuristic and magical.

For many years Fi Phillips worked in an office environment until the arrival of her two children robbed her of her short-term memory and sent her hurtling down a new, bumpy, creative path. She finds that getting the words down on paper is the best way to keep the creative muse out of her shower. Fi lives in the wilds of North Wales with her family, earning a living as a copywriter, playwright and fantasy novelist. Writing about magical possibilities is her passion. You can follow her on Twitter - @FisWritingHaven Or at fiphillipswriter.com - where you can also sign up for an exclusive short story from the universe of Haven Wakes - absolutely FREE!

There are 0 customer reviews and 3 customer ratings.

Ami A.
5.0 out of 5 stars An awesome read!
6 October 2019 - Published on Amazon.com
I absolutely and throughly enjoyed Haven Wakes. It is filled with surprises and plenty of twists and turns. I highly recommend it and hope you enjoy it as much as I did.

Disclaimer: I received a copy of this ebook from the author and this is my honest and freely given opinion.

Helen
5.0 out of 5 stars Best new fantasy novel for young adults
5 October 2019 - Published on Amazon.com
Absolutely loved this book! As a sci-fi and fantasy fan, I was excited to read Haven Wakes. The book is packed full of memorable characters who inhabit a world full of hidden magic and futuristic wonders. Would recommend as a perfect gift for teens and young adults, although if you're a Harry Potter fan like I am, you'll love Haven Wakes too!

Easy to read, with lots of direct speech that really brings the characters to life and moves the story along at a good pace.

Genuinely looking forward to Book 2, especially with the promise of romance in the air...


Read more
Go to Amazon.com to see all 2 reviews 5.0 out of 5 stars
Get FREE delivery with Amazon Prime
Prime members enjoy FREE Delivery and exclusive access to movies, TV shows, music, Kindle e-books, Twitch Prime, and more.
> Get Started
Back to top
Get to Know Us
Make Money with Us
Let Us Help You
And don't forget:
© 1996-2020, Amazon.com, Inc. or its affiliates