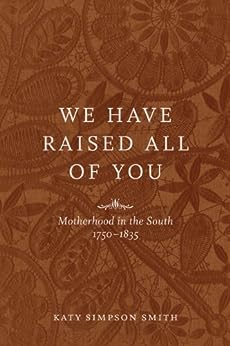 by Katy Simpson Smith (Author) Format: Kindle Edition
See all formats and editions
Sorry, there was a problem loading this page. Try again.

White, black, and Native American women in the early South often viewed motherhood as a composite of roles, ranging from teacher and nurse to farmer and politician. Within a multicultural landscape, mothers drew advice and consolation from female networks, broader intellectual currents, and an understanding of their own multifaceted identities to devise their own standards for child rearing. In this way, by constructing, interpreting, and defending their roles as parents, women in the South maintained a certain degree of control over their own and their children's lives. Focusing on Virginia and the Carolinas from 1750 to 1835, Katy Simpson Smith's study examines these maternal practices to reveal the ways in which diverse groups of women struggled to create empowered identities in the early South.
We Have Raised All of You contributes to a wide variety of historical conversations by affirming the necessity of multicultural -- not simply biracial -- studies of the American South. Its equally weighted analysis of white, black, and Native American women sets it distinctly apart from other work. Smith shows that while women from different backgrounds shared similar experiences within the trajectory of motherhood, no universal model holds up under scrutiny. Most importantly, this book suggests that parenthood provided women with some power within their often-circumscribed lives. Alternately restricted, oppressed, belittled, and enslaved, women sought to embrace an identity that would give them some sense of self-respect and self-worth. The rich and varied roles that mothers inherited, Smith shows, afforded women this empowering identity.

Smith has made a valuable contribution to gender and southern studies by effectively complicating and humanizing the concept of mother-hood. . . . Her text will join the ranks of the few others that tackle this universal and timeless subject.--Journal of American History

That one book can not only successfully bring together the multiracial experiences of women but also prove how motherhood 'offers the key to understanding women as instigators of change' in this era makes We Have Raised All of You an essential contribution to the field.--Virginia Magazine of History and Biography --This text refers to an alternate kindle_edition edition.

Katy Simpson Smith, a writer living in New Orleans, received her doctorate in history from the University of North Carolina at Chapel Hill. --This text refers to the hardcover edition.

Katy Simpson Smith was born and raised in Jackson, Mississippi. She received a PhD in history from the University of North Carolina and an MFA from the Bennington Writing Seminars. She is the author of We Have Raised All of You: Motherhood in the South, 1750-1835, and the novels The Story of Land and Sea and Free Men. Her writing has also appeared in the New York Times Book Review, the Oxford American, Granta, Literary Hub, Garden &amp; Gun, Catapult, and Lenny. She currently serves as the Eudora Welty Chair for Southern Literature at Millsaps College. She lives in New Orleans.