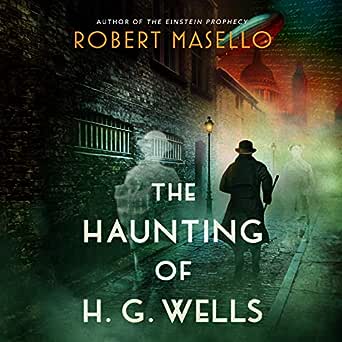 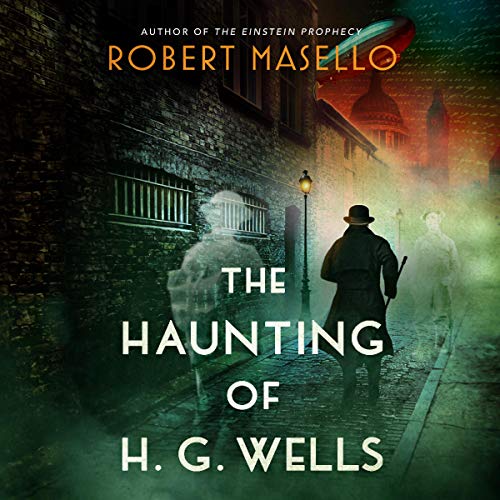 The Haunting of H. G. Wells

4.3 out of 5 stars
4.3 out of 5
6,585 global ratings
How are ratings calculated?
To calculate the overall star rating and percentage breakdown by star, we don’t use a simple average. Instead, our system considers things like how recent a review is and if the reviewer bought the item on Amazon. It also analyses reviews to verify trustworthiness.

TonyM
5.0 out of 5 stars Unexpected turns throughout
Reviewed in Australia on 10 January 2021
Verified Purchase
Quite an enjoyable book with a smattering fiction to help lighten the horrors described. I had not previously read anything 'about' Wells, though like everyone, have read and enjoyed his work. The book was easy flowing from one part to the next and kept the story moving without getting bogged down in too much detail.
Read more
Helpful
Report abuse

Kat
5.0 out of 5 stars WW1 with HG Wells in the spotlight
Reviewed in Australia on 31 October 2020
Verified Purchase
I loved this story. Some fact, some fiction woven together during WW1.....a very enjoyable read with various characters of the times popping in and out of a story that moves along at a good pace.
Read more
Helpful
Report abuse

Dr. Cornelis Greenway
5.0 out of 5 stars History of a well loved writer
Reviewed in Australia on 27 September 2020
Verified Purchase
I find history and fiction make good companions. The Harry Turtledove books are interesting as a reflection of the time for ordinary people. This book examines Wells and relationships. The book itself I have not finished, but the process of moving towards the end fills the time most pleasantly
Read more
Helpful
Report abuse

bookworm
5.0 out of 5 stars Great Read
Reviewed in Australia on 10 January 2021
Verified Purchase
Very exciting story that would make a great movie. Bit like Indiana Jones at times. Well written and I couldn't put it down! Never read any of HG Wells as not a sci fi fan, but loved this story about his life which has apparently quite a lot of truth combined with a jolly good story.
Read more
Helpful
Report abuse

Denise
3.0 out of 5 stars A wordier heavier book than what I am used too.
Reviewed in Australia on 27 November 2020
Verified Purchase
My expectations was that I would enjoy this book more than I did. I found it very wordy and did not flow well in some parts. However do not let my review put you off!
Read more
Helpful
Report abuse

Clifford
4.0 out of 5 stars H G in action
Reviewed in Australia on 30 December 2020
Verified Purchase
The writer captured the flavour of Wells’s own writing in this tale and peaked my interest in re-reading some of his stories I read so long ago.
Read more
Helpful
Report abuse
See all reviews

Alison
3.0 out of 5 stars The Haunting of H G Wells
Reviewed in the United Kingdom on 7 September 2020
Verified Purchase
It's not often l give up on a book, and maybe this one got better, but... my pet peeve is when an American author writes about a British subject and uses Americanisms. The newsagent wouldn't have casually 'made change'for a fiver in 1915. He wouldn't have had that much money. He wouldn't 'make change' anyway. Cars don't have goods, they have bonnets...it's not easy for any author to write about a foreign country, but a little research goes a long way.
Read more
45 people found this helpful
Report abuse

els76uk
1.0 out of 5 stars Barely disguised fan fiction
Reviewed in the United Kingdom on 8 September 2020
Verified Purchase
I only bought the book because it was listed in Amazon First Reads. It starts with a very strong prologue, but then lapses into sycophantic nonsense about how wonderful HG Wells is. The first few scenes in the book involve people simpering over him, as though he's so much more than an author and columnist. Even when he gets a bad review of his latest book, the reviewer readily accepts his invitation to his private estate (with private train stop!) and worries about whether she's going to make the right impression with the great man.

I don't know how books end up on the 1st Reads list, but can only imagine it’s some kind of financial incentive between the publishers and Amazon; it’s definitely nothing to do with whether the book is actually worth reading.

M. Dowden
5.0 out of 5 stars A Dastardly Plot
Reviewed in the United Kingdom on 2 September 2020
Verified Purchase
I think this is the first time I may have read a book by this particular author, and I will probably now have to go through his back catalogue to see what his other works are like. I must admit that of all the books on this month’s First Reads list this one to me looked like it would be the best of a not very inspiring lot, but to be perfectly frank I am glad that I did get this instead of not bothering to get any of the titles, as this exceeded my expectations.

Robert Masello here weaves fiction with some real life to give us something that is intriguing, fast-paced and with overtones of the supernatural. Starting off with Machen’s famous short story that some people still to this day actually believe happened so we are taken to the following year, where HG Wells is called upon to write up some pieces from the Western Front. Thus we find our unlikely hero caught up in the war and meeting the soldiers who have had enough and make a life of sorts in No-Man’s Land. But meeting one of these, a German officer, so we see that he has a notebook that he wishes to be passed to the British Government, as it details plans of a nefarious attack by germ warfare.

As Wells arrives back in London so we see that the man about to carry out the attack also has ideas of his own, including something that the German High Command have no idea of. With ghostly appearances, including a certain sergeant who although dead is determined to carry out his last mission - to protect HG Wells, so there is a lot of intrigue and excitement here. With a host of real-life and well-known people so the cast of this makes for an entertaining read, and one that would actually make a good film.

HG Wells with his illicit lover Cicily Fairfield aka Rebecca West are out to stop a plan that will bring the country to its knees, and result in untold death, whilst Winston Churchill oils the wheels for them. And whilst they are off doing their thing, so Wells’ wife finds herself caught up in her own adventure whilst aiding an injured German. This tale certainly offers a roller-coaster of a ride and most certainly ticks all the boxes for an entertaining and thrilling read. I would recommend that you read the author’s afterword to this as he points out where he has played about with certain elements, and also some of the truths that inspired this tale.

Pamela Scott
3.0 out of 5 stars A good book that doesn't always work
Reviewed in the United Kingdom on 8 September 2020
Verified Purchase
This is a bit of a disjointed book for me. I really enjoyed some aspects but other parts fell a little flat for ne. I was drawn to reading the book because of the word haunting in the title and the premise. I was expecting a sort of supernatural ghost story. That’s not what I got. The book opens in dramatic fashion and I hoped this was an impression of things to come. Sadly, it wasn’t. The actual haunting does not appear until much later in the book and is revealed not to be supernatural at all. Don’t get me wrong, the secret plot is quite scary but just not what I expected it to be so I was disappointed. I knew very little about Well’s life before I read the book so didn’t know he constantly cheated on his wife. I had a real issue with this part of the book. It made me dislike Wells as a character and a person. I also felt great pity for his wife. I’m not a prude but I have little tolerance for affairs, lies and casual betrayals. His affair with Rebecca happened in real life but I don’t see why this had to have such a big role in the book with Well’s wife being shoe-horned to the side. It was distasteful. There is a lot of stuff I enjoyed though. I haven’t read a lot of fiction set in the era of the book so this was illuminating. The author does a great job of bringing the era and real-life and fictional characters to life. I also enjoyed reading about Well’s experiences at the front.
Read more
11 people found this helpful
Report abuse

Targaid
3.0 out of 5 stars Underwhelming
Reviewed in the United Kingdom on 21 September 2020
Verified Purchase
Firmly in the current fashion of shoehorning authors into historical events as heroes this book uses H. G. Wells as the hero of a German plot during WWI. As such much of the narrative is based on history and maybe that's why I found it so lacking in threat or excitement.
The narrative is somewhat meandering, perhaps trying to catch a period feel and a hint of Wells' own style. As for the 'haunting' it seems to be used as a repeated sort of deus ex machina with Wells prompted by spirits to remember plot points or discover them without him having to use his own intelligence or imagination. If anything it undermines him as the hero of the book.
For me, too, the American author's inability to comprehend the difference between 'British' and 'English' irritated the hell out of me reading this. Yes, I know there have been centuries of the English promoting the two as synonyms and it is certain that many of the characters would have used that casual bigotry. However, it is carried over into the narrative with the author regularly referring to the 'English army' which hadn't existed for over two hundred years by this point in time. He regularly says 'English' when it should be 'British' and even on the occasions he does say British he still manages to get it wrong, like his repeated statement that St. George is the patron saint of Britain rather than England. I found this very, very annoying reading this book and there is a Star off the review for it.
Read more
5 people found this helpful
Report abuse
See all reviews
Get FREE delivery with Amazon Prime
Prime members enjoy FREE Delivery and exclusive access to movies, TV shows, music, Kindle e-books, Twitch Prime, and more.
> Get Started
Back to top
Get to Know Us
Make Money with Us
Let Us Help You
And don't forget:
© 1996-2021, Amazon.com, Inc. or its affiliates