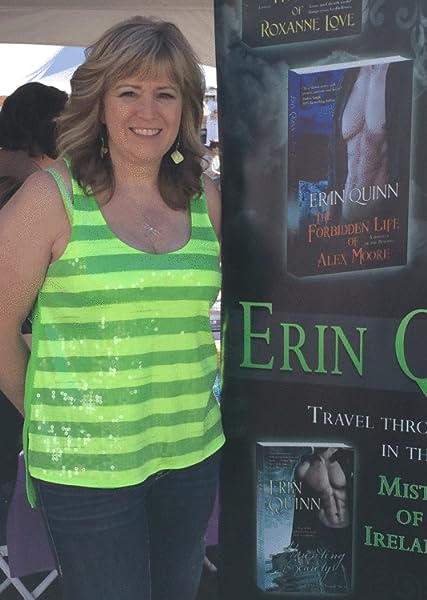 Start reading Haunting Beauty (Mists of Ireland Book 1) on your Kindle in under a minute.

"A complex, mysterious, and very satisfying story!"
-Diana Gabaldon
"A mystical tale of intrigue and seduction...The imagery is breathtaking and the prose is beautiful and authentic...you live the story, not just read it."
-Calista Fox, author of "Object of Desire"
"A dark and passionate romance with the literary brilliance of "The Time Traveler's Wife.""
-Kathryne Kennedy, author of "Enchanting the Lady"

Alexandra
4.0 out of 5 stars Good book, packaging needs work
Reviewed in the United Kingdom on 12 July 2019
Verified Purchase
Love the book to pieces. Sadly it came with a small rip in the bottom right corner but nothing too major. Still a bit sad as I'm a big book worm
Read more
Report abuse

nightreader
5.0 out of 5 stars Haunting and memorable
Reviewed in the United States on 21 February 2010
Verified Purchase
A fascinating blend of two kinds of magic: the magic of life and discovery, and the magical world of myth and legend. The normal and the paranormal. Erin Quinn has done it again as the reader becomes silent witness to both worlds.

Danni, an abandoned soul in the real world, is the catalyst that binds the story together. With no memory prior to the age of 5, she has been bumped from one foster family to another most of her life. Now as an adult is suddenly whisked away to Ireland on a voyage of self-discovery and history with little knowledge of how or why. Danni is special and is about to learn far more than she would like.

Erin Quinn has the ability to draw her audience with her through the normal and the paranormal fluidly. Her characters range from innocent to deranged, from old to young, and then there are the lovers, sensual and strong, yet fragile at the same time. Her ability to slip through time and space in her writing captured me and catapulted me into a place I'd never been. Dual characters put a different spin on the story of Danni's past and that of the young man in the normal world, who. suddenly appeared to bring her to this place. I don't want to write too much about the storyline itself. Be assured it is provocative and seductive, a very satisfying read. It also appears to be the beginning of an exciting series. I really enjoyed reading this book.

Avid Reading in NV
5.0 out of 5 stars 4.5 Stars for the Irish Paranormal Romance
Reviewed in the United States on 1 August 2010
Verified Purchase
Danni was left at a daycare 20 years ago and never picked up. She was left feeling abandoned and developed trust issues. Sean Ballagh shows up on her doorstep, after she just had a vision of him taking her through her mother's last appearance on the island in Ireland. Sean in real time tells her that they've been looking for her for 20 years. Her mother and twin brothers disappearance were the scandal of the century. He tells her about her father, still on the island, and that he wants to take her back where she belongs. Her attraction to Sean is instantaneous, but she keeps him at arms length unable to trust him. While in her kitchen in Arizona Sean kisses Danni, suddenly she is waking up in Ireland on the secluded island..... Twenty Years in the past!! She learns to trust her visions and follow the trail to find out and stop what happened to her family and Sean's.
This was an emotional ride... the pace quickens at the end. It isn't slow per se, isn't as fast as I like, but it didn't bother me. It was a very good, original story. I liked it a lot. I liked Danni learning of herself and her family, same with Sean. Sean's relationship with Danni is unique and intense. They must trust each other and help save one another. I would definitely read the second novel about Danni's twin brother, Rory.
Haunting Warrior (Haunting Series)
Read more
2 people found this helpful
Report abuse

Patricia M. Terrell
5.0 out of 5 stars Best Series I've Read in 20 Years
Reviewed in the United States on 24 February 2012
Verified Purchase
When two published authors highly recommended Erin Quinn's Haunting series to me, I knew I had to buy Haunting Beauty. I was instantly pulled into a mesmerizing, unique and colorful plot - transported to Ireland where I experienced every page with such intensity that I was even dreaming about Sean and Danni. Erin Quinn does not waste words. Her eloquent style describes everything fully and yet in a condensed manner that gives you everything you need to know and still keeps the action moving. I was getting very disappointed as I approached the end of the book because I didn't want this wonderful ride to end - and then I discovered Haunting Beauty was the first in the series. I immediately ordered the remaining three from amazon. I am so glad I discovered this author. She is fabulous - incredibly talented. You will love her books.
Read more
2 people found this helpful
Report abuse

PCox
5.0 out of 5 stars My 1st by Erin but won't be the last
Reviewed in the United States on 22 June 2014
Verified Purchase
I had just finished a 6 book series set in the early 1850's so I was making heck of a shift when I started the "Mists of Ireland" series, but was well worth effort I loved this story! The depth and richness of the language, fullness of the plot and characters kept me fully involved from the 1st page to well after the last period was reached. Those twists and turns with time were a riot. I really enjoyed that and your premise that things could be changed was intriguing. That's what makes reading so much fun.

My next book will be Rory's story but I do know that I will be reading all of them before the summer ends. ~P~
Read more
One person found this helpful
Report abuse
See all reviews
Back to top
Get to Know Us
Make Money with Us
Let Us Help You
And don't forget:
© 1996-2021, Amazon.com, Inc. or its affiliates