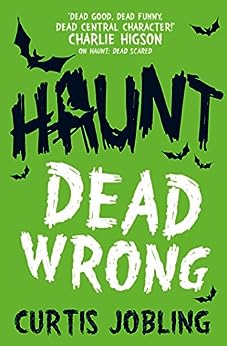 Curtis Jobling is the author of the acclaimed Wereworld series of fantasy horror novels, as well as illustrator of numerous picture books. He is also the designer of the BAFTA-winning Bob the Builder and the creator of various popular animated children’s series, including Raa Raa the Noisy Lion and Frankenstein’s Cat. He lives in Cheshire with his family. You can find him on Twitter as @CurtisJobling. --This text refers to an alternate kindle_edition edition.

bobbiesgirl
5.0 out of 5 stars 12yr old grandson loves these Haunt books
Reviewed in the United Kingdom on 6 June 2019
Verified Purchase
My grandson loved the first Haunt book and was desperate to get his hands on the second one.....he's been glued to it! Great to see.
Read more
Report abuse

Chirpy
5.0 out of 5 stars Dead Right!
Reviewed in the United Kingdom on 9 November 2015
Verified Purchase
Great story idea and one which will engage young and old. Both books in the series to date impress.
Read more
Report abuse

jane b
5.0 out of 5 stars Five Stars
Reviewed in the United Kingdom on 9 April 2015
Verified Purchase
brilliant story made me laugh and cry kids haven't read it yet
Read more
Report abuse

Keith B.
4.0 out of 5 stars Good Take On The Haunting Novel, Hopefully There's Sequels
Reviewed in the United States on 7 December 2016
Verified Purchase
This was a good story. Light yet spooky. Mysterious yet amusing. Very much a different take on the whole haunting genre. On his way to tell his best friend some amazing news Will is hit and killed by an unknown driver. Sometime later in the hospital he realizes he's dead. He had his moment to pass on into 'the next life' but just misses his chance. After a while he finds he's haunting his bust friend, Dougie. During this time the meet others who've passed on, some pleasant and worth helping solve their deaths, others far less friendly. (okay, I'm going to say it here and now and get it out of the way. These two are self proclaimed nerds, nothing's wrong with that, I'm one as well but come on! An invisible dead guy in a co-ed school and he doesn't make ONE trip into the girls locker room? As a 15 year old ghost you'd have to pry me out.) But anyway. . . the two solve another murder and realize that Will may be around a long time as they try to catch his killer. This was the perfect setup for a series of sequels which if they're as well written and funny as this novel could be a great series. Only time will tell. I thoroughly enjoyed every bit, twist and turn of this novel and hope there's more to come.

Amazon's mixing reviews again: The above is my review of Jobling's first book in the series 'Haunt Dead Scared'.

Since Amazon won't let me post a specific review of 'Dead Wrong' I'll add my review from GoodReads here:
"It's really hard to follow up a really good book and 'Dead Wrong' is proof of that. the first book to this series (I do hope there's more giving the author room to find his voice). But 'Dead Scared' was such a well written book and so different from the typical ghost, haunting genre that a follow up that was just as good? That was going to take a lot of effort. Unfortunately he came close, this was a good but sadly very predictable book. I enjoyed reading it and enough was left up in the air to allow for another sequel. We'll have to see if the author thinks we need more of this story line. I know I do.
All in all, this was good, not great but a sequel very much worth reading. ?