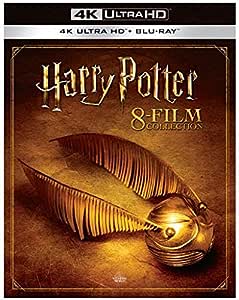 Format: Blu-ray
4.1 out of 5 stars 4 ratings
International product from outside Australia

All eight Harry Potter films on UHD Blu-ray feature DTS:X audio, which replicates and conveys the fluid movement of sound to create a richer experience than previously possible by moving sound to precisely where the mixer placed it.

Deborah Eason
1.0 out of 5 stars Misleading image for Harry potter DVD box set
6 June 2018
Format: DVDVerified Purchase
The picture on this website is WRONG. I did not get what I paid for. This is not an ULTRAVIOLET version. Extremely disappointed.
Read more
One person found this helpful
Helpful
Comment Report abuse

bernie (xyzzy)
TOP 500 REVIEWER
5.0 out of 5 stars It is time to just purchase the standard Potter series as a set
29 September 2019
Format: DVD
The basic story is Harry Potter learns that he has witchy powers and a mysterious past. Eventually, he will have to rise to the occasion and challenge evil and in the meantime, he needs to learn to grow and socialize as a regular kit with a dysfunctional family and extraordinary friends.

You will have to decide what format you are purchasing in as the each have advantages. Read carefully as some have DVD extras and others do not.

By the time you read this you will notice that there is another series on fantastic creatures available.

I suggest you read the books first as they tell the fuller story. But do not let the privity of the movies keep you from having the fun watching Harry grow up before your eyes.

Some supplementary books by J.K. Rowling can and to the experience and books will point out that the depth of philosophe and Greek mythological creatures that J.K. Rowling drew from in here writing.
Read more

While I would have preferred to have all the extra content of the hogwarts collection in the 4kUHD set, I can say that the 4k edition of the movies look absolutely phenominal on a 4k HDR television! I would have preferred some more details in the description of what you get in each package, and I hope that amazon does a better job seperating reviews from product to product as some of the reviews DO NOT apply to the 4kUHD set.
Read more
1,135 people found this helpful

S. Ferrin
3.0 out of 5 stars 4K Collection Missing Extras and Extended versions
31 December 2017 - Published on Amazon.com
Verified Purchase
I really wish Amazon kept all the reviews separate for each format on movies so it was easier to read about the specific version I want to buy. I'm not going to review the movies. This review is just for the collection itself, and what's included. More importantly, what's not included. If you are buying this 4K collection only for the movies, you will not be disappointed. This is the best way to see and hear the movies. They look amazing and sound even better. However, I was surprised when I opened the box and saw only 16 discs, 8 for the 4K editions and 8 for the Blu Ray editions. If you were to buy the 4K movies individually, you get an additional 3rd disc which is where all the extras are. That 3 disc is not included for any of the movies in this collection. There are no extras included with this collection, except for one each on the Blu Ray edition; the in-movie experience. I previously owned the Blu Ray Ultimate editions, and I was really disappointed that the documentaries found on there are no where to be found in this collection. No additional scenes. Nothing. In addition, the previous Extended versions of The Sorcerer's Stone and The Chamber of Secrets are only available on the Blu Ray discs. The 4K disc only contains the Theatrical version. Had I known this before I bought, I would have waited for better 4K box set, or bought all the movies individually.
Read more
367 people found this helpful

Jessica Gomez
1.0 out of 5 stars The set I received we're burnt copies
17 February 2018 - Published on Amazon.com
Format: DVDVerified Purchase
*** UPDATE *** I returned this very disappointing set of DVD's and DID RECEIVE A FULL REFUND. I've never once had a bad Amazon experience until today. I received a set of burnt DVDs, the film quality was grainy. I was super bummed. Hoping to return them for a refund. Just praying I don't get "burnt" while doing so.
Read more
263 people found this helpful

Code Red
4.0 out of 5 stars I'll save you the CONFUSION!
8 August 2014 - Published on Amazon.com
Verified Purchase
I want to help clarify the difference between the 2 affordable Harry Potter Blu-Ray series, to you all. I've been back and forth on which to buy for the last several months. When searching on Amazon for this set, you'll notice that there are 2 sets, both with all 8 movies, both with the same number of reviews. There is usually between an $8-$15 difference in price between the 2. These are INDEED different, regardless of how similar they are described. Here's why…

I'll start with the blu-ray that has 3 differently aged Harry's on the cover. You'll notice that it is bigger than the other collection being sold. What they don't tell you is that the discs are in 4 separate cases, 2 movies in each case. There are also 11 discs, not just 8. But to be clear on this, the 3 extra discs are just bonus content from the last 3 movies. All of the other movies have the bonus features on the same disc. There is a ton of extra content on each disc. You'll also notice, from a side view picture, the list of movies that are in the box. The first says, "The Philosopher's Stone", rather than "The Sorcerer's Stone". Don't worry, it's not a bootleg copy. It's the English (UK) version of the set. The U.S. version changed the name for marketing purposes and it doesn't affect anything about the set.

Now for the OTHER set being sold:

This set, with the cover being of the castle, is smaller and more compact. This is because it has an insert that unfolds with all movies attached to each fold. It's neater, takes up less space, and in my opinion, looks more like the set it should be. However, this set contains only 8 discs (1 for each movie), with NO Bonus Content discs. I know about this set because It is the same that I borrowed from a friend.
So, there's not much of a difference here. I bought the bigger looking box because of the extra content and it was cheaper. The other box looks more like a classic collection but lacks content. Still, any Harry Potter Collection is worth buying. You'll always have an urge to watch it again and again (I watch the series twice a year). The Blu-Ray makes a huge difference in quality over DVD, so if you have a good TV and a Blu-Ray player, you have to go Blu-Ray.

There's been a little more confusion because Amazon has added a couple other collections and newer Blu-rays of single movie of Harry Potter. It has been more difficult to search for collections so i've made it easier for you. Here are the links for the above mentioned collections that I reviewed:

Amazon has changed their Harry Potter supply lately. I'm not sure why, but Amazon has combined ALL reviews for different H.P. collections into one, leaving it difficult to distinguish between them all. Now it's hard to tell what any review is for. If my links are not highlighted, just copy and paste them.
***If you Search "Harry Potter Blu Ray Collection", it WILL NOT show you the "3 Faces" collection so please use the link that i've provided above***

***I would also like to make an important note of feedback from readers. There are versions that you need to be aware of that are MAY NOT be playable in the U.S. It's another collection that is European made and most of the time, the discs are not playable on North American Blu-Ray Players. Obviously if you're reading this and you live in Europe, it'll work for you. I've started to notice those little numbers on the cover that have an Octogon with a number in the center. It means Irish Film Classification Office. They're definitely European made discs. Buy at your own risk though. One reader wrote that they played on his Playstation but couldn't comment on a Blu-Ray Player.***

This should still help everyone.I will continue to update as needed in order to help you.
Fantastic Beasts and Where to Find Them has created another buzz in the world of Harry Potter. If you haven't seen the movie, it is "Fantastic"! AND IT'S COMING OUT ON BLU-RAY SOON!!!!!!!!!

RIP Alan Rickman, aka Severus Snape! You are missed by all Fans.

Thanks for reading! If you liked this review, you may like my other ones on various products helpful as well. [...]. Thanks again!
Read more
7,929 people found this helpful
Go to Amazon.com to see all 11,543 reviews 4.3 out of 5 stars