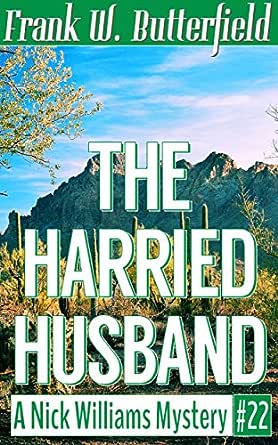 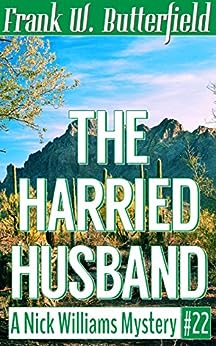 It's been three weeks since the case against Nick and Carter was dismissed and life has moved on.

They're at home in the big pile of rocks on Nob Hill and doing swell.

It's been two weeks since Nick started seeing Dr. Sylvester, an analyst who offices in The Shell Building on Bush Street.

And on this particular Monday, at 1 p.m., the good doctor will ask Nick an important question that turns out to be something Nick has never truly considered. As he ponders the answer, he begins to wonder about the nature of his relationship with Carter.

Psychoanalysis can do that, you know.

Meanwhile, a new client wants to see Nick. He claims that only Nick will be able to catch his cheating wife in the act. And it might end up being a good deal for everyone involved. Well, almost everyone.

In order to work the case, Nick decides he needs to grow out his beard so no one will recognize him as he prowls the City. Of course, Carter is along for the ride because beard burn isn't good. So they're off to the woods for 10 days to rough it.

Don't turn that dial! The further adventures of Nick and Carter will continue after these messages from our sponsors.

Ulysses Grant Dietz
5.0 out of 5 stars Nick looks within, and we all get surprised.
25 June 2018 - Published on Amazon.com
Verified Purchase
“I once again thought about how much we’d both been crying since we’d gotten home.”

This was a quiet one, and I for one, was grateful for the emotional respite. Although Nick isn’t really the harried husband of the title, he might as well be. This is the book where I cried for Nick.

Our boys are back home in the pile of rocks on Nob Hill. There is a bit of adventure by means of an alleged sting operation that Nick and Carter get pulled into (the supposed harried husband), but that turns out to be something quite different, and rather more dangerous, than they bargained for. This offers a slightly lame excuse for another fascinating but only mildly eventful side trip to Phoenix. This jaunt feels a bit random, but in fact turns out to be the perfect quiet mini-adventure we all needed. Nick gets to be Nick and our boys get to grow beards. How could that be bad?

The really interesting aspect of this volume in the series is that Nick Williams finally looks inward. With all the global traumas of the last five years, and Carter’s 40th birthday in the picture, Nick finally decides to do some professional soul-searching. What he learns—and what we learn as well—is both surprising and affirming. It is another reminder, deftly handled by Butterfield, that the vast majority of gay men in 1960 still didn’t have any kind of support network of family and friends. Nick begins to see that he’s at the center of something special. Nick and Carter’s years in Africa taught them that it’s not just about their money; it’s about making the world a better place. As Nick and Carter head toward middle age, this might just become their raison d’etre.

Sean Andrew McNamara
5.0 out of 5 stars Remarkable
19 June 2018 - Published on Amazon.com
Verified Purchase
Remarkable! I've been a loyal fan of Frank Butterfield and this series in particular mainly because it echo's so many interests and experiences that I have wandered through in my life. In as much as Nick and Carter have one of the most well mapped lives that I have read it floors me that in each and every book in this series Mr Butterfield has found a way to surprise, delight, move, anger and keep me enthralled. This book takes place in a time that we knew was coming to our hero's, and I think of them as hero's. For 5 years they have traveled out of the US in search of solace and a reality that is far away from the politics and repression that they have back home. They are sorely missed by all that love them and care for them, but cannot let there guard down for fear the negativity that follows them everywhere will focus on those they care. Oh those characters can take care of themselves but Nick/Carter don't even want to tempt fate. Now they are home, and what they expected to happen-does in the prior book! The aftermath is plotted out so that we see how it effects all those folks and what next steps are being realized by the men. All the maelstrom of fact and emotion are in play as they chart the next steps in there personal and physical relationship. It is painfully hard to read Mr Butterfield at times- I can't imagine what he does to tap into some of these area's but you come out whole and better for the experience. And while the characters right themselves, they also continue to grow their business and widen their circle of influence.
I can't wait to read more!
Read more
One person found this helpful

ReaderNYC
2.0 out of 5 stars A snooze
17 September 2018 - Published on Amazon.com
Verified Purchase
I have read a few other books in this series, some have been better than others. The only reason I kept reading this one was because I don't put a book down once I have started it. But I saw no reason to keep reading. There was no story here. It wasn't clear why the husband was "harried." It wasn't clear why Nick and Carter had to go undercover. The hackneyed plot was resolved in one page, if you blinked you missed it. The storyline around Nick's sexual identity was overly-dramatic and just not very interesting, other writers have tried to mine this same territory, with similar silly results. I just didn't see why I should care. A quibble here, but the author constantly uses the phrase, "That was me" or "That was Carter" as he lands the reader in the middle of a conversation. Use of that convention repetitively becomes annoying, as it quickly did. I don't expect characters in a book to be believable, certainly not in this genre, but their extravagant wealth reduces them to characters you would find in a romance novel. I think of the books in this series as a gay 50's cozy mystery.
Read more
One person found this helpful

John Johnson Jr.
5.0 out of 5 stars The boys are back in town...
4 June 2018 - Published on Amazon.com
Verified Purchase
Book 22 in the Nick and Carter series continues the trend of the mysteries being background to the interpersonal drama going on in the characters’ lives. (Think Moonlighting—nobody really watched to see them solve the Anselmo case.) Nick and Carter have gotten their wish and returned to San Francisco. They’re reconnecting with friends and Nick has started seeing a therapist.

There are a lot of fun plot threads in this particular outing, and, without spoiling any, Marnie finally gets some face time with Nick, Gustav and Ferdinand are more seamlessly integrated into the main plot, and several storylines from past episodes are resolved. The ‘50s are over and, as Roger teaches the boys, tea will be spilled in the ‘60s.
Read more
2 people found this helpful

Geoff Whitwell
5.0 out of 5 stars Another fantastic chapter in Nic and Carters lives
6 June 2018 - Published on Amazon.com
Verified Purchase
Frank has once again written a story that brings us closer to understanding what life might have been like for two gay men in the early 60’s. Despite the ups and downs this and the last book have enabled me as a reader to be less tense because we are starting to see more general acceptance of gay men in society. The whole series is like a factual history lesson whilst encompassing the lives of some wonderful characters. Can’t wait for the next instalment.
Read more
2 people found this helpful
Go to Amazon.com to see all 15 reviews 4.6 out of 5 stars
Get FREE delivery with Amazon Prime
Prime members enjoy FREE Delivery and exclusive access to movies, TV shows, music, Kindle e-books, Twitch Prime, and more.
> Get Started
Back to top
Get to Know Us
Make Money with Us
Let Us Help You
And don't forget:
© 1996-2020, Amazon.com, Inc. or its affiliates