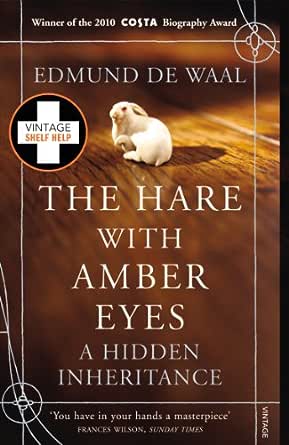 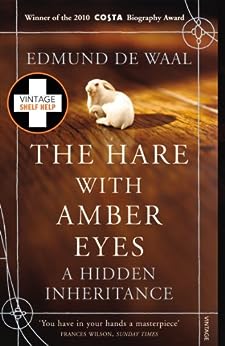 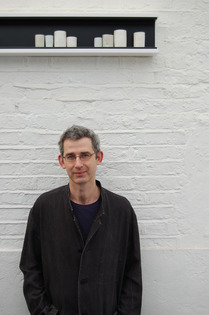 The Hare With Amber Eyes: A Hidden Inheritance Kindle Edition

"Absorbing . . . In this book about people who defined themselves by the objects they owned, de Waal demonstrates that human stories are more powerful than even the greatest works of art." --Adam Kirsch, The New Republic

"At one level [Edmund de Waal] writes in vivid detail of how the fortunes were used to establish the Ephrussis' lavish lives and high positions . . . And, as Jews, of their vulnerability: the Paris family shaken by turn-of-the-century anti-Semitism surging out of the Dreyfus affair; the Vienna branch utterly destroyed in Hitler's 1937 Anschluss . . . At a deeper level, though, Hare is about something more, just as Marcel Proust's masterpiece was about something more than the trappings of high society. As with Remembrance of Things Past, it uses the grandeur to light up interior matters: aspirations, passions, their passing; all in a duel, and a duet, of elegy and irony." --Richard Eder, The Boston Sunday Globe

"To be handed a story as durable and exquisitely crafted as this is a rare pleasure . . . You have in your hands a masterpiece." --Frances Wilson, The Sunday Times (London)

"A family memoir written with a grace and modesty that almost belie the sweep of its contents: Proust, Rilke, Japanese art, the rue de Monceau, Vienna during the Second World War. The most enchanting history lesson imaginable." --Claudia Roth Pierpont, The New Yorker

"The book not only of the year, but of the decade." --Michael Howard, The Times Literary Supplement

"As full of beauty and whimsy as a netsuke from the hands of a master carver. Buy two copies of his book; keep one and give the other to your closest bookish friend." --The Economist

Edmund de Waal was apprenticed as a potter in Canterbury, studied in Japan and then read English at Cambridge. His porcelain is in 30 international museum collections: most recently he has created major installations for the V&A and Tate Britain. He has written widely on art, ceramics, design and orientalism and is Professor of Ceramics at the University of Westminster. --This text refers to an alternate kindle_edition edition.

The history of a family through 264 objects - set against a turbulent century - from an acclaimed writer and potter --This text refers to an alternate kindle_edition edition.
Read more