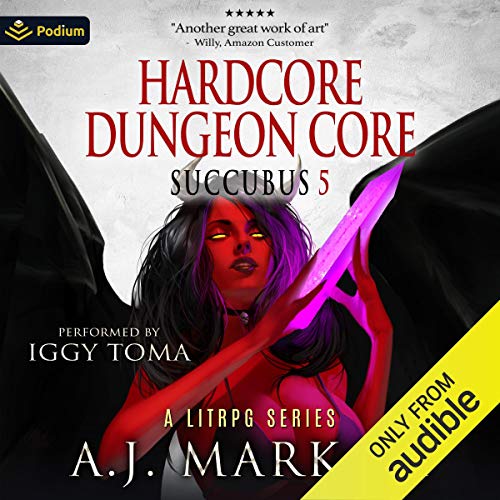 He thought it was all a game…until he lost everything.

Tragedy has struck, and now Ian must try to reverse it.

Inside the virtual reality video game known as OtherWorld, he will recruit new allies…play politics with a duchess and an emissary of the Church of Eternity…square off against a trio of bounty hunters…meet a vastly powerful dungeon core who can bend reality itself…and encounter the most frightening opponent he has ever faced.

But most important of all, he will risk everything to save the woman he loves.

4.6 out of 5 stars
4.6 out of 5
87 global ratings
How are ratings calculated?
To calculate the overall star rating and percentage breakdown by star, we don’t use a simple average. Instead, our system considers things like how recent a review is and if the reviewer bought the item on Amazon. It also analyses reviews to verify trustworthiness.

Naz
5.0 out of 5 stars Another Fantastic Installment
Reviewed in Australia on 23 November 2018
Verified Purchase
A Great continuation for an amazing series. Can't wait for book 6.
Read more
Helpful
Report abuse

Lotro
5.0 out of 5 stars My new best Author!
Reviewed in Australia on 9 November 2020
I usually don’t do series reviews until the last book. But I’ll make an exception here.

BECAUSE IT WAS SO FRICKIN AWESOME!!!

Litrpg doesn’t get better than this.

Other than a bit overdone on the sex scenes. Everything else was spot on.
Read more
Helpful
Report abuse
See all reviews

ABB
5.0 out of 5 stars Succubus 5
Reviewed in the United Kingdom on 6 December 2018
Verified Purchase
Worth the wait and now the wait for volume 6. I am glad that Alaria has been re incarnated. Some of the structures are more for gamers, but the rest is readable
Read more
One person found this helpful
Report abuse

Alan Elliott
5.0 out of 5 stars delivers what it says on the box
Reviewed in the United Kingdom on 27 February 2019
Verified Purchase
The story continues to develop and always delivers when you finish one book you are waiting impatiently for the next
Read more
Report abuse

Dean Buzzell
5.0 out of 5 stars Oh. My. GAWD!
Reviewed in the United States on 30 November 2018
Verified Purchase
Holy crap!! I found myself thinking, after finishing each installment, that there’s no way the author can top it in the next one. But he does. And not by a bit, but by glorious leaps of imagination and hairpin twists and turns. Love the new sidekick characters, and hope we see them again in future episodes. Continuing character development is amazing (although the petulant, faithless, MEAN Ian can grow thin at times).

So it appears that subsequent episodes will be based on the quests to kill former masters. If that’s the case, I hope there’s a crap bag full of them, ‘cause I can’t get enough of this series. I think I commented in my review of the previous installment that this was a labor of love for the author. Book 5 does nothing to change that feeling; if anything, I may have to rephrase that to a labor of passion.

Hats off to you, Mr Author - you’ve raised the bar a bunch of notches yet again with Succubus 5, and I eagerly anticipate the next installment.
Read more
4 people found this helpful
Report abuse

Mr. No Body
5.0 out of 5 stars Another Great Adventure
Reviewed in the United States on 7 May 2019
Verified Purchase
This book has more Bad Guys, But a really really Bad Guy who wants to destroy everything He doesn't understand or even wants to understand. Like always there is a very different Good Guy, and of course there's everything in between. I have read A.J. Markham book , Succubus: A Christmas Special, but You don't have to read that book in order to understand His first book or the other ones that follow. As soon as I finish this review, I starting Book 2. Well I just finished Book 2, and believe Me it's just as good as His first book. So now it's on to Book 3, I just finished Book 3, and so far I have enjoyed all 4 of the books that I have read, can't wait until I finish this review to start Book 4.
Well I just finished Book 4, and believe Me it's just as good as His 4 Books. The adventures continue with Bad Guys, Good Guys & the surprises in between. So far I'm very happy with all of A.J. Markam books. So now it's on to Book 5. I hate to repeat Myself, but I'm being to like the Bad Guys as much as I like the good Guys. This book definitely has some interesting characters in it. I don't want to give anything away, so I suggest that You read the book. I can't wait until Book 6 comes out
If You just want to sit back and enjoy a fantasy book I recommend reading one if not all of A. J. Markham books. Well written & very enjoyable. You can almost picture Yourself there with all of the characters.
Have fun & a safe trip.
Bye.
Read more
One person found this helpful
Report abuse

Peter Krausche
4.0 out of 5 stars Suspenseful
Reviewed in the United States on 7 April 2020
Verified Purchase
In this fifth installment of AJ Markam's Succubus series, which begins seconds after the last book ended, Ian must find a way to get his succubus and love of his life, Alaria, back. While doing so, he must evade a trio of ruthless bounty-hunters who were sent after him by the loan-shark to whom he owes tons of money, and deal with a few other antagonists such as sex-craved duchess, the hypocritical and cruel Church of Eternity, and the even crueler and fanatical Grand Inquisitor of the Dungeon Guild.

*** SPOILER ***
In the first few chapters of the book, we discover that Alaria's soul has been transferred to a dungeon core crystal (we remember that her late ex-master Orlo put her in a robot body in the previous volume, but that body was destroyed and Ian thought Alaria had permanently died). The only way they can return Alaria's soul to her body is with the help of another dungeon core and good friend of Alaria's, Deek.
*** SPOILER ***

In this volume, Ian tries to help Alaria realize that he loves her, independent of which form she's in. As with the other volumes, I could hardly put it down, and I can recommend the book to anyone who enjoyed the previous volumes of the series.
Read more
Report abuse
See all reviews
Back to top
Get to Know Us
Make Money with Us
Let Us Help You
And don't forget:
© 1996-2022, Amazon.com, Inc. or its affiliates