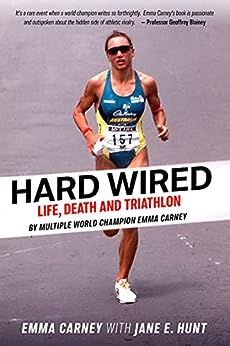 by Emma Carney (Author), Jane E Hunt (Author) Format: Kindle Edition
See all formats and editions
Sorry, there was a problem loading this page. Try again.
Fresh out of school and emerging as one of Australia's future distance running stars, Emma Carney discovered the sport of triathlon. The sport was never the same again. With an unmatched record, she devastated the international circuit. Defined by a relentless pursuit of sporting excellence, Emma was known to detest losing more than she loved to win.

At home in the cutthroat world of professional sport, Emma didn't expect a welcoming party waiting for her when she reached the pinnacle of triathlon. A fiercely independent athlete, fitting in and conforming was never her style. Rules annoyed her. Authority irritated her. And that complicated things…

Emma's is a life publicly defined by winning. But like sport, nothing is predictable. Success is fickle, life is fragile.

Emma's story reveals that international sporting success is about much more than winning. Courage is a constant. Hard work and dedication are vital, as are unwavering passion, belief, and desire. But there is more. Emma's story also raises questions: who is truly there when things go wrong, when the system fails? Who cares when you find yourself dying on the roadside, saving yourself only to then lose your sister, identity, self-belief and hope in everything you once believed in...?
Read more
Previous page
Next page

Dr Hunt has taught a range of Australian History, Australian Studies, Australian Cultural History and Modern History subjects across seven Australian universities since 1999. Her research interests include various aspects of Australian cultural history, among them female cultural authority; cultural histories of running and triathlon; and the interrelationship between sport and understandings of identity and place. In 2009, Dr Hunt received the Fryer Library Award for her project 'Daphne Mayo - three snapshots'. This project allowed Hunt to continue her research into female cultural authority- in this instance, the strategies that sculptor Daphne Mayo developed in order to open up Queensland to the arts and artistic thinking endorsed by the art worlds of Europe, America, and the rest of the world. Hunt has published articles in numerous journals, including Australian Historical Studies, Journal of Australian Studies, Australian Cultural History, Australian Literary Studies, and has work forthcoming in Hecate, and the major international journal Women's History Review. Hunt has also contributed numerous entries to the Australian Dictionary of Biography and delivered conference and seminar papers around Australia, and in Scotland. She is currently working on two book projects: a cultural history of triathlon in Australia, and the sporting histories of the Gold Coast. --This text refers to the paperback edition.

4.4 out of 5 stars
4.4 out of 5
16 global ratings
How are ratings calculated?
To calculate the overall star rating and percentage breakdown by star, we don’t use a simple average. Instead, our system considers things like how recent a review is and if the reviewer bought the item on Amazon. It also analyses reviews to verify trustworthiness.

I couldn't put it down and can recommend it to everyone.
Read more
Helpful
Report abuse
See all reviews

Scott
5.0 out of 5 stars Inspiring
Reviewed in the United States on 6 November 2021
Verified Purchase
Emma Carney is probably misunderstood by many in triathlon and the wider Australian sports community. I know I certainly did. Engaging book, a great insight into the mind of someone who’s battled many things in life and sport, and emerged with an excellent ‘win-loss’ record.
Read more
Report abuse
See all reviews
Back to top
Get to Know Us
Make Money with Us
Let Us Help You
And don't forget:
© 1996-2022, Amazon.com, Inc. or its affiliates