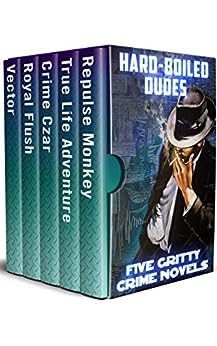 4.0 out of 5 stars
4 out of 5
35 global ratings
How are ratings calculated?
To calculate the overall star rating and percentage breakdown by star, we don’t use a simple average. Instead, our system considers things like how recent a review is and if the reviewer bought the item on Amazon. It also analyses reviews to verify trustworthiness.

Kathleen M. Fox
1.0 out of 5 stars Boring.
Reviewed in the United States on 30 November 2018
Verified Purchase
I thought the book was boring and had too much technical terminally to truly understand the story line and enjoy the book.
Read more
5 people found this helpful
Report abuse

Whitney
5.0 out of 5 stars Loved it
Reviewed in the United States on 11 March 2021
Verified Purchase
Hard-Boiled Dudes box set has the following titles REPULSE MONKEY by Dick Cluster, TRUE LIFE ADVENTURE by J. Paul Drew, CRIME CZAR by Tony Dunbar, ROYAL FLUSH by Shelley Singer, and VECTOR by Rob Swigart. I’ll update my review as I finish each title.

mzbeastle
4.0 out of 5 stars Very nice collection - PI noir across the spectrum
Reviewed in the United States on 9 March 2019
Verified Purchase
I was surprised by this collection - from all the different directions the various authors approached the "PI mystery" genre. Furthermore, I had previously found 3 of these, and enjoyed them at the time, so was pleased to find them in this collection. Lots of action, quirky characters, sometimes improbably situations, but all very good specimens of this wide, wild genre.
Read more
One person found this helpful
Report abuse

Amazon Customer Bob
5.0 out of 5 stars Excellent mystery
Reviewed in the United States on 17 October 2017
Verified Purchase
These books are going to keep your attention well into the night. The twists and turns of the plot will keep you wondering what is next.
Vector by Rob S wigart
Is about a secret group working for US Navy to develop a microbe that will end all wars by infecting a select group of ....
You have to read it to find out which group and how a few responsible scientists and cops are able to infiltrate their lab.
Read more
One person found this helpful
Report abuse

John Shearer
4.0 out of 5 stars Hard Boiled Dudes
Reviewed in the United States on 23 January 2017
Verified Purchase
This is a good collection of mystery/ thrillers. The main characters run the gamut from gentle cerebral type to all ahead no holds barred.
Read more
3 people found this helpful
Report abuse
See all reviews
Back to top
Get to Know Us
Make Money with Us
Let Us Help You
And don't forget:
© 1996-2021, Amazon.com, Inc. or its affiliates