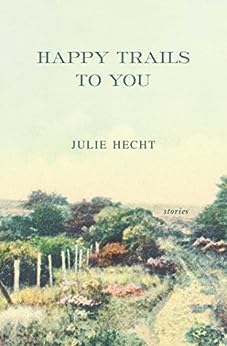 by Julie Hecht (Author) Format: Kindle Edition
See all formats and editions
Sorry, there was a problem loading this page. Try again.
When Julie Hecht's stories first appeared in The New Yorker, her unnamed photographer-narrator became an instant literary icon. Chronicles of her strategies for surviving civilization's decline -- herbal remedies, macrobiotics, a bit of Xanax -- have established her as one of the most captivating and eagerly read voices in modern literature.

In this new collection of stories, Julie Hecht reclaims the darkly funny, existential territory for which she is known: "People say 'Good morning,' but don't believe them. It's just something to say." The uniquely eccentric narrator reappears in Happy Trails to You and recounts her perplexed engagements with our society and the larger world -- whether she's attempting to withdraw money from a bank machine, worrying about Paul McCartney, or seeking a nonexistent place of calm on Nantucket, where nail guns and chain saws have replaced the sounds of birds singing.

Appalled by life in our times, the narrator recounts innumerable artifacts from a now vanished America (civility, idealism, Elvis Presley, well-made appliances). She is also exquisitely attuned to the absurdities of our culture; her acute observations illuminate every subject, from the dangers of microwave ovens to the disappearing ozone layer. With deadpan wit, the author reveals the truths of a new century. Happy Trails to You is a radically distinctive work of American fiction.
Read more
Previous page
Next page

"But as times have changed, so has [the book's] character -- wonderfully, bracingly so. Hecht's latest story collection, Happy Trails to You, is piloted by the same half-babbling, half-deadpan voice, now with larger, more political concerns...These aren't merely the worries of an eccentric middle-aged East Coast vegetarian; they're the all-too-common concerns of the mainstream liberal consciousness. In the new century, Hecht's narrator is suddenly less alone in her alarm and alienation, finding more kindred spirits than ever before...But Hecht plays with this stereotype on many levels, and the collection's strongest moments describe a frustration with civilization that can't be blamed solely on psychosis." -- Katherine Hill, Bookforum --This text refers to an alternate kindle_edition edition.

Julie Hecht is the author of Happy Trails to You: Stories, The Unprofessionals; Was This Man a Genius?: Talks with Andy Kaufman; and Do the Windows Open? Her stories have been published in Harper’s and The New Yorker. She has won an O. Henry Prize and received a Guggenheim Fellowship. She lives on the east end of Long Island in winter and Massachusetts in summer and fall. --This text refers to an alternate kindle_edition edition.

Bodil Malmsten
5.0 out of 5 stars JULIE HECHT SIMPLY THE BEST
Reviewed in the United Kingdom on 8 November 2014
Verified Purchase
BEST MODERN WRITER
THIS BOOK ONLY SECOND TO
"DO THE WINDOWS OPEN"
BY THE SAME AUTHOR, JULIE HECHT
Read more
Report abuse

Eileen Pollock
5.0 out of 5 stars Delicacy
Reviewed in the United States on 21 July 2008
Verified Purchase
Julie Hecht writes rarely, but when she does it is with a rare delicacy. She describes the everyday, but with a special sensitivity, and always, absurdity, though not of the obvious sort. She describes the gift of a pair of mittens, an encounter with an actor-waiter, her relationship with her cleaning lady, with a mixture of bemusement and outright bewilderment. I feel Julie Hecht is a stranger on her home turf, and especially, a stranger in 21st century America, or what this country has become. I wish we could be friends, but that would be impossible, since I live in New York City and my food choices would deeply offend her sensibilities. In fact, her intolerance in a hyper-tolerant culture is one of her most attractive qualities. Her doctrinaire insistence on standards, albeit standards that are politically liberal and nutritionally vegan, is again, charming, because it is deeply rooted in an at-times off-kilter humanity. I was disappointed, though, in the last story, where a bizarre interview leads to poignant reflections on the state of the culture and the ignorance of young people. It was to me too much, it veered off the atmosphere of hothouse sensibility that Julie Hecht's narrator previously had inhabited. But the story that culminates in her taking down the American flag, and particularly, the reason why she takes it down, is deeply patriotic, albeit in an offbeat, quirky way. A fine follow up to her brilliant Do the Windows Open?
Read more
9 people found this helpful
Report abuse

Diane St John
5.0 out of 5 stars Highly recommended!
Reviewed in the United States on 16 May 2008
Verified Purchase
I have avidly awaited this sequel to Hecht's wonderful first story collection (Do the Windows Open?), and was thrilled to find that this collection is deeper, wiser, more mature, and a joy to read. I have just finished it and want to immediately re-read it. The writing is delicate and elegant, with sudden hilarious moments, and although the narrator could be described as rigid, neurotic and judgmental, she also comes across as deeply sensitive, intelligent and caring - i.e., very human - a wonderful sleight of hand for an author. Many of the stories are almost perfectly crafted and all are subtly understated. I love this author and I love this book.
Read more
17 people found this helpful
Report abuse

MKB
5.0 out of 5 stars saves the best for last
Reviewed in the United States on 8 February 2010
Verified Purchase
Reading this book was an interesting experience. The author is playing around with different things. The writing is very clear and distinct but what she's communicating is subtle. Like Hemmingway, but more satirical. Sometimes the stories in this book seemed to be concerned with emptiness, but I couldn't really say for sure what's in the author's mind. The last story in the book made the whole book worth putting up with the annoying, self-absorbed snobby narrator.
Read more
Report abuse
See all reviews
Back to top
Get to Know Us
Make Money with Us
Let Us Help You
And don't forget:
© 1996-2022, Amazon.com, Inc. or its affiliates