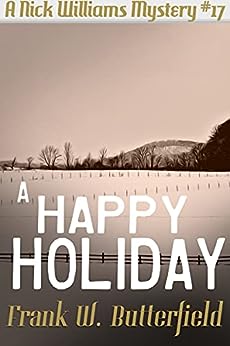 Ulysses Grant Dietz
5.0 out of 5 stars Not just a holiday story--a pivotal moment in Nick and Carter's amazing adventures.
Reviewed in the United States on 21 April 2018
Verified Purchase
OK, folks, how did I miss this one? I bought it. It was on my Kindle, but I skipped from “The Rotten Rancher” to “The Adroit Alien” and didn’t seem to notice that I’d jumped over a bunch of plot. Yeesh, how dim am I?

I think I thought it was a Christmas short, and not part of the main series. Well, I was wrong. “A Happy Holiday” is a lynchpin in the Nick and Carter adventures. It is another step in the startling journey these two young men have taken since they appeared from Frank Butterfield’s pen. It is, in spite of its title, possibly the darkest of all of the books, because Nick is haunted by death, both past deaths and the threat of his own, throughout the story.

We follow Nick and Carter and their extended family across the country in a desperate quest to have one last Christmas together before they begin their exile to France. In the crosshairs of everyone from J. Edgar Hoover to the San Francisco Mob, Nick is finally beginning to see the real downside of being the most famous homosexual in the world. Even his money, he realizes, can’t keep him out of danger.

Once again, Frank Butterfield has done marvelous background research to create authentic settings that bring the book, and the historical period alive. He has played (quite openly) fast and loose with historical reality. This is in complete harmony with my vision of Nick and Carter as a sort of rich gay Batman and Robin (who, frankly, were really pretty gay). Butterfield posits a world that, while full of homophobia and plain meanness of spirit, was also full of allies in unexpected places. Nick’s real super power is finding people who either need his help or are willing to help him.

People also say “I love you” a lot in this book, and that’s a crucial element, especially with the off-kilter holiday theme of the narrative. Love is exactly what gay folks did not have in the bad 1950s (this story takes place the year I was born). Gay men and women sought community below the radar of 1950s moralism and conformity, but often couldn’t find it. Butterfield looks at a fantasy world of gay interconnectedness, and makes us wonder, at least, if it might not have been at least partly true. Ultimately, the power of these supposedly light-hearted books is the way they highlight how badly gay people were treated my lifetime, and how dramatically different today is, with all the uncertainties we still face as a community. Even with all the money that Nick and Carter have, it is ultimately the love surrounding them, and the love they give to others, that is their salvation.

silvia
5.0 out of 5 stars Christmas came early
Reviewed in the United States on 28 January 2020
Verified Purchase
I loved this book. There was so much action as a Nick and Carter are traverse across the country with the mob in hot pursuit. This had a bittersweet ending that had me bawling my eyeballs out. There was so much to enjoy as I devoured each word like it was my last meal. Can’t get enough of Nick and Carter.
Read more
Report abuse

Greg Parker
5.0 out of 5 stars Five Stars
Reviewed in the United States on 19 January 2018
Verified Purchase
I love it because it's another Nick Williams Mystery. Another well written book.
Read more
One person found this helpful
Report abuse

Thomas Kean
5.0 out of 5 stars Excellent
Reviewed in the United States on 6 December 2017
Verified Purchase
I love all of the other adventures also .They remind of my younger days in northern California and San Francisco
Read more
One person found this helpful
Report abuse
See all reviews
Back to top
Get to Know Us
Make Money with Us
Let Us Help You
And don't forget:
© 1996-2021, Amazon.com, Inc. or its affiliates