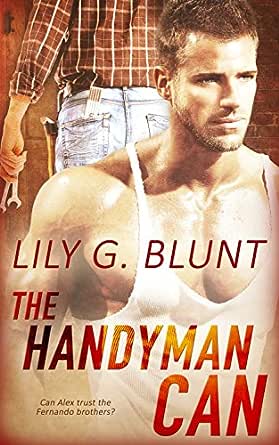 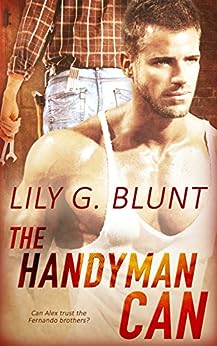 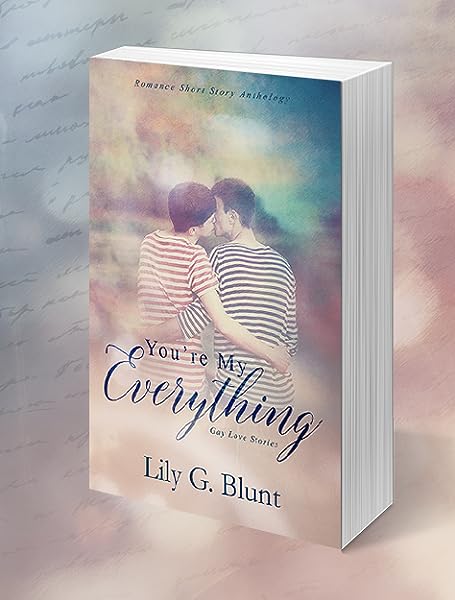 The Handyman Can Kindle Edition

Alex is falling in love with Michael, one of the gorgeous handymen who maintain his property. Can Alex trust the Fernando brothers or are they thieves?

After moving into his new house, Alex Sucre employs the three good-looking Fernando brothers as handymen to maintain his home and garden. He’s immediately attracted to Michael, the youngest, and enjoys watching his muscle-packed body through his study window as he works.

After a spate of burglaries in the area, one of Alex’s neighbors accuses the brothers of the thefts. Alex is reluctant to believe that any of them could be responsible, as their business is thriving and they appear to be honest men. But once that seed of doubt has been sown, Alex wonders whether they can be trusted.

Should Alex confront Michael with his suspicions and risk destroying their newly formed relationship?

Lily G. Blunt writes contemporary gay romance. She loves to explore the relationship between two men and the intensity of their physical and emotional attraction. Angst often features in her stories as she feels this demonstrates the depth of the men’s feelings for each other. Lily is forever writing imaginary scenes and plots in her head, but only a few ever make it to the page—there never seems to be enough hours in the day despite having left the teaching profession to concentrate on her writing!

Lily discovered the wonderful world of m/m romance novels five years ago via fan fiction and went on to write stories in her spare time. With the encouragement of her friends and readers she decided to publish some of her work. Lily subsequently self-published several stories via Amazon. She later published short stories and is excited about joining Pride Publishing for her upcoming story, The Handyman Can.

Easily distracted from her writing, Lily makes videos using clips from gay-themed movies and posts gorgeous pictures of men kissing or making out on her tumblr and Facebook pages. Lily is also an avid supporter of GLBTQ rights and advocates equality for all. She was recently a steward for Pride in London.

Lily lives in central England with her rather bemused husband and a ‘mad as a bag of frogs’ Shetland Sheepdog called Barney.

C.J. Baty
5.0 out of 5 stars Short but oh so sweet!
15 March 2016 - Published on Amazon.com
Verified Purchase
This is a wonderful story about a growing relationship. Alex has a new home in a plush neighborhood with a group of mixed residents. He hires a trio of brothers to do work around the house for him. He is attracted to the youngest of the brothers Michael and they soon begin dating. Before the two of them can become as close as Alex would like them to, neighborhood robbery's make some of his neighbors suspicious of the brothers. This story is short but oh so sweet. There is some angst but nothing awful. The ending is very fulfilling and the last scene, well let's just say Ms. Blunt has a way with two men in love, like very few authors out there. One other thing, I have to mention is the editing in this story was excellent. There was nothing that threw you out of the story. Well worth your time to read.
Read more
2 people found this helpful

Krogh
3.0 out of 5 stars Ok story, bit a bit short
30 August 2016 - Published on Amazon.com
Verified Purchase
The story it self is really great. I was a bit disappointed because I thought that Michael and Alex met for the first time when Alex watched Michael work in his garden. However it turned out that they had been together before that.

I would've loved a little more anticipation surrounding the thefts. Everything seemed to be happening so fast.

A little bit longer would've done it for me, but a great story after all.

Bo
3.0 out of 5 stars Nice After Dinner Drink
29 March 2016 - Published on Amazon.com
Verified Purchase
No angst, characters who are into each other, distrustful old cranky neighbors, and a huge hole--we have absolutely no idea what Alex looks like. Still, pleasant enough to read along with a couple of Baileys on the rocks.
Read more
One person found this helpful

Angela S. Goodrich
4.0 out of 5 stars 4 stars = I REALLY liked this book!
7 March 2016 - Published on Amazon.com
I received a free copy of this book to read and review for Wicked Reads.

The Handyman Can was a quick read that gave me just enough story and steam to satisfy me. I was actually pleasantly surprised with how much of a plot there was considering it’s less than 50 pages long. However, because Blunt chose to focus on a short period of time (two to three weeks) in Alex and Michael’s budding relationship, there was no need to rush the storyline along to a happily ever after.

The Fernando Brothers are primarily gardeners, but also do other odd jobs around their customers’ homes as needed. Since moving to the neighborhood four months earlier, Alex has made extensive use of their services and only recently began dating the youngest of the brothers, Michael. By establishing an employer-employee style relationship between Alex and Michael, the author makes the connection between the two feel real as they’ve been interacting with one another for several months. Yet because they’ve only begun dating recently, it explains why the seeds of doubt planted by a neighbor are able to take hold. Alex knows Michael, but how well does he REALLY know Michael. That, plus a little bit of personal doubt combined with some especially bad timing come together spectacularly and lead to Michael finding out that Alex suspected him and his brothers in a rash of robberies in the area. Although the story is presented from Alex’s point of view and it is easy to understand why he reacts the way he does when everything comes to a head, it was just as easy to understand why Michael was so hurt by Alex’s doubts. I was surprised when Michael’s brother kept their service appointment with Alex the following week and that Dom wasn’t hostile toward him over the incident. I enjoyed how the author dealt with the solving of the robberies. Even better though, was the scene in which Alex and Michael finally consummate their relationship. That was seriously hot and I appreciated the timing of it within the story. The Handyman Can was an enjoyable and steamy read, and when it comes to Michael, the handyman really can.
Read more
2 people found this helpful

I enjoyed the simmering heat when the story starts and the way it slowly built up to the steaming finale after all issues have been resolved. And I liked that this story provided more than ‘just’ a steamy romance; we’re also given the opportunity to enjoy a mystery with an action packed conclusion. Quite an achievement, considering the length of this story.

Having said all of that, I did have one or two reservations as well. Once or twice Alex came across as somewhat condescending in the way he thought about Michael and his brothers. As much as it is clear he is head over heals in love with his handyman, Alex’s thoughts made me a bit uncomfortable at times and somewhat worried about their future as a couple. My second reservation is connected to the first one; Alec was very quick to have doubts about the three brothers even if he doesn’t voice them to Michael. These were minor issues though. Overall the obvious and very hot attraction between these two men took centre stage and kept me rooting for them even when it seemed as if it might all be falling apart before it had even had a chance to begin.

Long story short: The Handyman Can is a hot, fast paced and well plotted story and as a result a thoroughly enjoyable quick read. If you find yourself with a spare hour on your hands I recommend this story whole-heartedly.
Read more
One person found this helpful
Go to Amazon.com to see all 5 reviews 3.8 out of 5 stars
Get FREE delivery with Amazon Prime
Prime members enjoy FREE Delivery and exclusive access to movies, TV shows, music, Kindle e-books, Twitch Prime, and more.
> Get Started
Back to top
Get to Know Us
Make Money with Us
Let Us Help You
And don't forget:
© 1996-2020, Amazon.com, Inc. or its affiliates