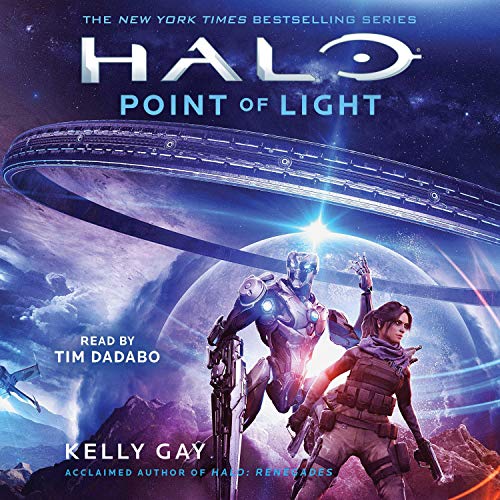 4.8 out of 5 stars
4.8 out of 5
216 global ratings
How are ratings calculated?
To calculate the overall star rating and percentage breakdown by star, we don’t use a simple average. Instead, our system considers things like how recent a review is and if the reviewer bought the item on Amazon. It also analyses reviews to verify trustworthiness.

Ethan
5.0 out of 5 stars I think this is a great book.
Reviewed in Canada on 19 March 2021
Verified Purchase
I think this a great book.
It is good if you want to learn more about the Halo universe.
It has a lot about the Forerunners in this book but I suspect that the things in this are the same as or similar to the stuff in the Forerunner trilogy.
It was entertaining and had a good story.
I suggest reading Halo: Renegades (I hope I spelled that right) first because this is a sequel to it.

I wonder if I actually am the first one to review this.
The Amazon review area for this book said that no one else had written a review.
Read more
Report abuse

Jay
5.0 out of 5 stars See it buy it
Reviewed in India on 10 June 2021
Verified Purchase
It's perfect and satisfying conclusion to many things and perfect end with coming in join with game lore. I guess it's must buy for a person into halo lore to enjoy halo infinite ♾
Read more
Report abuse

sNovah
5.0 out of 5 stars A genuinely excellent entry in an excellent series
Reviewed in the United States on 4 April 2021
Verified Purchase
Honestly, the Rion Forge series has been one of the best parts of the Halo universe since Bungie stepped away. And this novel, in particular, *really* brings that home (spoilers to follow):

We get a *lot* of resolutions and answers that have been drifting around since the Forerunner Trilogy (for all his writing ability, a *lot* of the first two books in that series were... confusingly written). And we get an unexpected ending to Spark/Chakas' involvement in the series that's been lingering since the end of *that* trilogy.

Beyond that though, Rion Forge and her crew are just some of the most *alive* characters in any of the Halo books. They're not SPARTANs, they're not ODSTs (well, anymore, RIP Cade); they're teenagers from the slums, scavengers, scrappers, and they act like it. It's both a realistic and romantic portrayal of the "wild west in space", although a part of me still feels bad that the UNSC ends up having to play the role of the big bad empire... Not that they don't deserve it, but still.

And of course, we don't have Kelly Gay constantly having her characters moralizing someone they've never met (*cough*Traviss*cough), although I feel like they could be more angry or upset over the Librarian's literally *millennia*-long plots and plans forcing them into action.

So honestly, I can't recommend this series enough: Gay's ended up being one of the best writers and contributors to the Halo universe tonight, and I lover her work for it. I still miss Nylund, but most of the writers since the 343 era started have been seriously fantastic. Now, if only 343 would actually manage the same narrative quality and cohesiveness in their *games*...
Read more
4 people found this helpful
Report abuse

Vinnie
5.0 out of 5 stars Love it
Reviewed in the United States on 12 March 2021
Verified Purchase
Another amazing story by kelly gay. A perfect continuation to Halo Renegades. Full of emotion, tension and excitement for the future of the franchise.
Read more
One person found this helpful
Report abuse

Stephen Graham
5.0 out of 5 stars Author is a great addition to the franchise
Reviewed in the United States on 23 April 2021
Verified Purchase
I love all of the Kelly Gay Halo books. The books seem to tie directly into the Haloverse better than others. The Rion Forge story is it's own tale, but also incorporates past and present elements of Haloe as well as characters from the main canon. Hope to see more from this author.
Read more
Report abuse
See all reviews
Back to top
Get to Know Us
Make Money with Us
Let Us Help You
And don't forget:
© 1996-2021, Amazon.com, Inc. or its affiliates