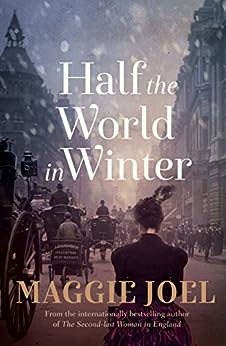 Half the World in Winter Kindle Edition

Maggie Joel has been writing fiction since the mid-1990s and her short stories have been widely published in Southerly, Westerly, Island, Overland and Canberra Arts Review, and broadcast on ABC radio. --This text refers to an out of print or unavailable edition of this title.

A captivating drama of secrets and tragedies in a Victorian family adrift in their rapidly changing world. --This text refers to an alternate kindle_edition edition.

As the days get colder and darker, nothing warms me more than a period novel. Reminiscent of Kate Summerscale and set in the Victorian era, two men of very different social classes both lose their daughters in tragic accidents. * Red * Maggie Joel's new novel takes us upstairs, downstairs and into the darkest corners of a Victorian household... If you like robust dramas with the occasional dash of dark humour, then you will love this. * Daily Telegraph (Sydney) * A page-turner full of detail and colour. * Saturday Age * A sombre but fascinating tale. * The Australian * --This text refers to an alternate kindle_edition edition.
Read more

3.6 out of 5 stars
3.6 out of 5
10 global ratings
How are ratings calculated?
To calculate the overall star rating and percentage breakdown by star, we don’t use a simple average. Instead, our system considers things like how recent a review is and if the reviewer bought the item on Amazon. It also analyses reviews to verify trustworthiness.

Grannysebooks
3.0 out of 5 stars A novel of Victorian life
Reviewed in Australia on 28 June 2016
Verified Purchase
A slice of life tale of a railway accident and how if caused a sequence of intermingled events impacting the lives of the those residing in the Jarmyn household.
Read more
Helpful
Report abuse

Swirls
4.0 out of 5 stars Reflective reading
Reviewed in Australia on 10 February 2015
It is May 1880 and Sofia Jarmyn at nine years of age has just burned to death. Her family insularly grapple with the hideousness. Seven months later Alice Brinklow, also nine years of age, is fatally impaled in a train accident. Her father is out for retribution.

Half the World in Winter vividly portrays a family in mourning, the dysfunction common to the era and the isolation and quiet desperation as each flounders in their grief and sense of guilt. It is a story of responsibility and reverberation of actions. Above all it will leave you reflecting.

Maggie Joel writes tension and dysfunction so well it is palpable. She is a master “at depicting the kind of small, casual cruelties family members can inflict on one another” (Kerryn Goldsworthy, Sydney Morning Herald). At times this feels unbearable and then Joel deftly injects some light humour courteous of the housemaid or cook.

So what didn’t work so well in Half the World in Winter? The pacing. Very slow to warm up and then when it did it felt as if too much was happening. Too much that distracted from a very good story. Three characters all attempt suicide in the one spot of the Thames on the same night. The effect is that we are overloaded, assaulted and there is a dilution of what could have been an incredibly powerful ending. Less would have been infinitely more.

Whilst it is slow to warm we are treated to some fascinating period detail. Joel takes us to the ‘Dearly Departed’ (an emporium for all things mourning) where the Jarmyn cousins labour over the “correct” dress material and notepaper to purchase. We are exasperated while Aurora struggles with social hierarchy and the dinner seating plan. And we feel Dinah’s frustration, how trapped she feels in this family, this house and this era with all its meaningless custom.

What I will say is that if you loved Joel’s previous work, ‘The Second Last Woman in England’ you should love Half the World in Winter. Both come from the same formula. Both are quite sombre and melancholic and both will leave you reflecting.

(Three and a half stars)
Read more
Helpful
Report abuse

Gael
4.0 out of 5 stars Good read
Reviewed in Australia on 18 July 2019
I loved this book. Set in the 1800’s, I felt the slow pace matched the era. I especially like the absurdity of the upper class manners.
Read more
Helpful
Report abuse

Shelleyrae
3.0 out of 5 stars Genteel historical drama
Reviewed in Australia on 21 October 2014
A story of tragedy, grief, and redemption, Half The World in Winter centers around Lucas Jarmyn and his family who are mourning the grisly death of nine year old Sofia. As the household struggles with the loss of their beloved daughter and sister they turn away from each other, and their home, in which Lucas forbids a fire to be set, grows ever colder.
Hundreds of miles away a train accident claims the life of a young girl. Her grief stricken father, Thomas Brinkley, demands justice from the head of the railway, Lucas Jarmyn, and when it is not immediately forthcoming, seeks revenge on the man and his family.

Half the World in Winter is an exploration of the dynamics of a family in mourning, and the impact of death and grief in a period where tragedy was common. The Jarmyn family are not only struck by the death of Sofia, they lose a nephew to the Boer War, a cook to a chicken bone, a discarded maid to vice, and are burdened by the deaths of those souls killed on the railway.

"Inside 19 Cadogan Mews time had ceased. It no longer existed, it had no meaning. A silence had fallen that no one felt willing to break. Footsteps were muffled, and commands, if they were given at all, were given in muted whispers in the hallways and corridors. doors were kept closed and before entering hands hesitated on doorknobs and deep breaths were taken. An excuse not to enter at all was often found."

Set in England during the 1880's, the period detail is rich and meticulous, from the minutiae of the Jarmyn's household to the physical and social context of Victorian England. I was surprisingly interested by the workings of the Victorian railway system, and intrigued by the elaborate rituals of mourning - for middle class Britons there were strict rules to be followed after a death, determining, for example, the type and colour of fabric worn, to the depth of the border on notepaper.

"Half an inch for the first three months of mourning certainly. After that the border decreases to one-third of an inch. At six months it decreases to a quarter of an inch, then in increments of a tenth of an inch over the succeeding six months depending on the nature of the loss and one's relationship with the deceased"

I did struggle with the sombre and often bleak timbre of the narrative and the measured pace of the novel quickened only marginally near the end. The writing however is stylish and descriptive, and the portrayal of the period is vivid.

Half The World in Winter is a genteel historical drama, but it was a little too slow and solemn for me to really enjoy.
Read more
2 people found this helpful
Helpful
Report abuse
See all reviews

London Matron
2.0 out of 5 stars lost this plot
Reviewed in the United Kingdom on 15 March 2016
Verified Purchase
Loved the idea of this book; promised much in the blurb; started off well - but then all too quickly Matron literally lost the plot. The story is of a little girl killed in a fire and the repercussions on her grand railway owning family - with the arrival of a man whose daughter has also been killed but on one of their trains. Good set up, the writing is deft, the first few chapters engage - and then we introduce more points of view, the plot jumps back and forth - and sadly the book loses Matron as a reader. Didn't the editor see that? Perhaps above all what detracts is the lack of attention to detail - look, we must not be trainspotters in historical fiction, but when SO many details are wrong, well, perhaps the historical side could be better next time - if there is one. Here are just a few - this very rich Victorian family live in a Mews (no, that is where the servants and horses live, grandhouses are not in mews); they take hansom cabs (no, not the master and mistress who had their own carriages); they eat together at 6 (highly unlikely as the more middle class the more likley to eat at 8 to ape their betters); MPs are called The Honourable (they are not unless ministers) - and that's a few. Gave up half way through. Good ideas though.
Read more
Report abuse

Elizabeth Neale
5.0 out of 5 stars Five Stars
Reviewed in the United States on 3 June 2015
Verified Purchase
It was quite an interesting period book
Read more
Report abuse

derek clifford evennett
2.0 out of 5 stars Two Stars
Reviewed in the United States on 5 December 2014
Verified Purchase
Very hard to get into, dreary and slow.
Read more
Report abuse
See all reviews
Back to top
Get to Know Us
Make Money with Us
Let Us Help You
And don't forget:
© 1996-2021, Amazon.com, Inc. or its affiliates