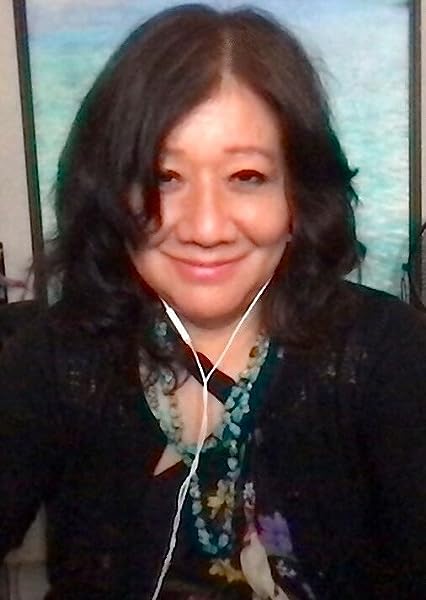 by Kadohata (Author)
4.6 out of 5 stars 45 ratings
See all formats and editions
Sorry, there was a problem loading this page. Try again.

Page 1 of 1 Start overPage 1 of 1
Previous page
Next page
Start reading Half a World Away on your Kindle in under a minute.

"Kadohata's stunningly intimate narrative reveals a complex boy, as self-protective as he is a danger to himself, but oh so clear about the true nature of things."-- "The New York Times"

If literary genius is composed, at least in part, by an uncanny ability to enter other worlds, then 'Half a World Away' proves Cynthia Kadohata's genius - not that there was any doubt.-- "The Boston Globe"

Cynthia Kadohata is the author of the Newbery Medal-winning book Kira-Kira, the National Book Award winner The Thing About Luck, the Jane Addams Peace Award and PEN America Award winner Weedflower, Cracker!, Outside Beauty, A Million Shades of Gray, Half a World Away, Checked, A Place to Belong, Saucy, and several critically acclaimed adult novels, including The Floating World. She lives with her dog and hockey-playing son in California. Visit her online at CynthiaKadohata.com.

Amazon Customer
5.0 out of 5 stars A Good Example of an Adopted Child's Inner Thoughts
Reviewed in the United States on 2 March 2018
Verified Purchase
It is difficult to write a review on this book because of the sensitive subject matter. Not that the book is about adoptions, but that this book, for this age level, actually showcases the seedy practices in many international adoptions. I, as an adoptee, never knew my biological parents. Jaden knew, and sort of remembers his biological mother. What he feels is what every adopted child feels at some point in their lives; "Why did my biological parent(s) not love me enough to keep me?" As he comes to terms with his own feelings, he then accompanies his parents as they embark on a trip to adopt another child, which all children who are older probably feel, "Am I not good enough? Is that why they need another one?" So his inner thoughts are real and very poignant. As long as the focus of this book is not on the fact that international adoptions can be horrendous (which the ones in this book, while not the worst I've encountered, are still shady), then I would recommend this book as one to read in an elementary school classroom as a way to showcase how a child (adopted or not) feels when a new family member is brought into the mix.
Read more
2 people found this helpful
Report abuse

Kathryn Page Camp
5.0 out of 5 stars Even Middle-Grade Boys Will Enjoy It
Reviewed in the United States on 21 December 2017
Verified Purchase
It's hard finding books for boys that touch their emotions as well as their sense of adventure, but this one succeeds. "Half a World Away" is a compelling story and an insightful look into the adoption of older children.The main character was adopted from Romania four years earlier, when he was eight, and he is a problem child. He thinks the child his parents are in the process of adopting from Kazakhstan is a replacement, and he doesn't blame them for wanting to get rid of him. After all, he doesn't love them--or does he? This book shows the difficulties that come with foreign adoptions, but it also highlights the joys.
Read more
Report abuse

A198LE25
5.0 out of 5 stars I laughed, cried and fell in love
Reviewed in the United States on 6 August 2018
Verified Purchase
This book is well-written and gives an excellent perspective of adopted children in a way that is both approachable and easy to understand/relate to. This would be a great book for a class reading project, for any perspective-adoptive parent (which was my original intent in reading), or just to add to your adult or adolescent library. I laughed, I cried and I fell in love with this family. Pick up a copy, you won't be disappointed!
Read more
Report abuse

marcwilliams
5.0 out of 5 stars Outstanding Book on Adoption -- As Seen from the Child's Perspective
Reviewed in the United States on 22 February 2016
Verified Purchase
This is an outstanding book. My sons (ages 8 and 5) are adopted, and my older one is starting to wonder about his story. He's known he was adopted since birth, but now that it's become an interesting topic for him, he loved this book and it really helped us open up some important conversations. I would suggest the parent read the book first (I didn't) so he or she is prepared for the discussions this book makes possible. However, it's the first book about adoption that my son had ever shown an interest in, and it gave us a chance to talk about some things that had clearly been plaguing him. If you're an adoptive parent, by all means, buy this book, read it, and decide when is the right time to have your child read it.
Read more
8 people found this helpful
Report abuse

Kindle Customer
5.0 out of 5 stars Great book for young readers
Reviewed in the United States on 6 May 2016
Verified Purchase
Great book! This was on of the books assigned to our "Battle of the Books" and all of the kids loved it. (4th and 5th grade)
Read more
2 people found this helpful
Report abuse
See all reviews
Back to top
Get to Know Us
Make Money with Us
Let Us Help You
And don't forget:
© 1996-2021, Amazon.com, Inc. or its affiliates