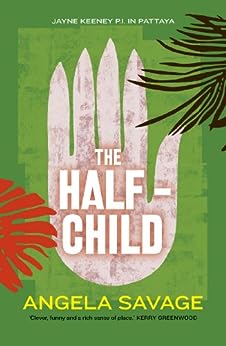 by Angela Savage (Author) Format: Kindle Edition
See all formats and editions
Sorry, there was a problem loading this page. Try again.

Jayne Keeney is a fiesty thirty-something private investigator who has been living in Bangkok for many years. She has been hired to investigate the alleged suicide of a young Australian woman in a seedy Thai coastal town.

Maryanne Delbeck was happy and harmless, her father refuses to believe she took her own life. Jayne immerses herself in the case, navigating the backstreet world of Thai ladyboys, monks, strippers, expats and corrupt officials. Maryanne's death is not the only mystery awaiting Jayne among Pattaya's neon signs and go-go bars.

While working undercover at the orphanage where Maryanne volunteered, Jayne discovers something far more sinister. Now her life is in danger, her case is still unsolved and she barely has time for dinner with her handsome new love interest, Rajiv.

With love and death both circling, Jayne now has two cases to crack and very little time to do it.

Angela Savage is a Melbourne-based crime writer, who has lived and travelled extensively in Asia. Her first novel, Behind the Night Bazaar won the 2004 Victorian Premier's Literary Award for an unpublished manuscript. She is a winner of the Scarlett Stiletto Award and has twice been shortlisted for Ned Kelly awards.

'Clever and funny, The Half-Child is full of clashing cultures and a rich sense of place.' Kerry Greenwood

'This page-turner hooks you in from the start. 4 stars' Cosmopolitan

Funny, heart-wrenching and informative, Savage's heroine is someone readers will want to share a beer with. 4 Stars.' Big Issue

'Angela Savage must have to be one of the most talented authors I have come across, and her novel The Half-Child does not disappoint...It is not only a crime novel, but a mixture of genres rolled into one. There is romance, heartache and a cultural synopsis of Thailand - the good and bad. Savage has written a well-researched piece...' Launceston Examiner

'One of the most satisfying aspects of this series is its sense of place...Stylish and witty...with rich characterisation and the portrait of a complex culture under threat from both within and without. Savage has an important point to make.' Sydney Morning Herald

'Savage not only skillfully entertains her readers but also makes us think poignantly and enlighteningly about the big questions of equality and exploitation, sacrifice and the true nature of courage. 5 stars.' Adelaide Advertiser

'This is a gripping novel; an unromanticised travel guide to today's Thailand; a critique of Western missionary endeavours; and a warning to naive young people who stumble into volunteer work without the necessary skills.' Australian Bookseller and Publisher

Angela Savage travelled to Laos on a six-month scholarship in 1992 and wound up staying in Asia six years. She was based in Vientiane, then Hanoi and Bangkok where she established and ran the Australian Red Cross HIV/AIDS subregional program. Angela lives in Melbourne, Australia, and is now working on her third Jayne Keeney PI novel. --This text refers to the paperback edition.

LYN
5.0 out of 5 stars Entertaining and thought provoking
Reviewed in Australia on 8 June 2016
Verified Purchase
Savage does it again. Another captivating read that engages complex and challenging subject matter in a truly believable and thought provoking way. Sacrifices none of the fun of the suspense journey along the way.
Read more
Helpful
Report abuse
See all reviews

Ms. Melissa Fitzgerald
5.0 out of 5 stars So you think you know Thailand?
Reviewed in the United States on 12 August 2013
Verified Purchase
Set in exotic Thailand, Savage's books strip back the facade experienced by tourists to unveil the shadowy underworld created when greedy expats prey on vulnerable local women. This is a place where abandoned and abused mothers have no choice but to give their babies to the local orphanage to look after while they fight to survive as hostesses and prostitutes. These women dream of saving enough money to take their babies home, but can never return to their villages because of the shame they have brought on their families. Private Eye Jayne Keeney, a woman of courage and fortitude, is soon deep undercover in attempt to find out why so many of the orphanage's babies are dying. Jayne is a real woman; she has a sex drive, she smokes and drinks and isn't afraid to use deception to uncover the truth. Savage's novels reveal a sensitive understanding of Thailand, giving her writing currency in a world awash with private investigators.
Read more
Report abuse

Amazon Customer
5.0 out of 5 stars Recommended.
Reviewed in the United States on 15 October 2015
Verified Purchase
A well-paced mystery-thriller with absorbing characters and a thought-provoking (possibly controversial) theme. Based around inter-country adoptions and the orphan industry. Recommended.
Read more
Report abuse

claire humphrys
4.0 out of 5 stars Go for it Angela
Reviewed in the United States on 14 August 2013
Verified Purchase
I think shes an easy to read author in an exotic place that im familiar with. The inclusive customs are rivoting....I saw her speak at sisters in crime and she was oozing happy success
Read more
Report abuse

Qwerty1
4.0 out of 5 stars easy PI story
Reviewed in the United States on 2 December 2014
Verified Purchase
Easy read, enjoyable. Not a complicated story, but not stupid either. Would be happy to read some of her other books.
Read more
Report abuse
See all reviews
Back to top
Get to Know Us
Make Money with Us
Let Us Help You
And don't forget:
© 1996-2021, Amazon.com, Inc. or its affiliates