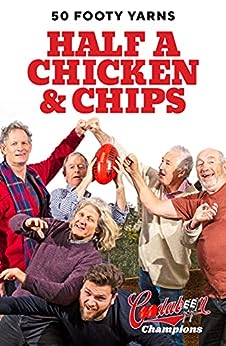 Half a Chicken and Chips Kindle Edition

by Coodabeen Champions (Author) Format: Kindle Edition
See all formats and editions
Sorry, there was a problem loading this page. Try again.

The Coodabeen Champions love the obscure, quirky and low-profile products of VFL/AFL football. And they love tracking them down and having a chinwag with them on their ever-popular radio show via segments such as Trailblazers, The Other Side of the Deal, A Foot in Both Camps and The Kids Are Alright. Not to mention the Coodabeens taking the one-game wonder brigade a step further to highlight the Two Game Wonders! Half a Chicken and Chips features 50 of the Coodabeen’s best yarns from five decades of footy radio. The tale behind the title is revealed by Peter Johnston, a central figure on the day that Sidey (Garry Sidebottom) missed the Geelong bus to a final at Waverley in 1981. Johnno’s story—and more—tumble out of the pages as a cavalcade of characters share their 15 minutes of fame with the wireless wags. Half a Chicken and Chips is the follow-up to the best-selling Coodabeen Champions: 40 Footy Seasons, which celebrates 40 years of truly unique Australian entertainment and broadcasting.