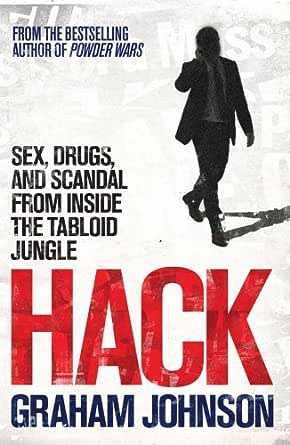 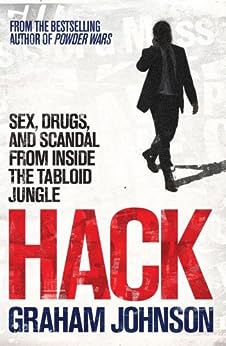 Hack: Sex, Drugs, and Scandal from Inside the Tabloid Jungle Kindle Edition

Graham Johnson is an investigative journalist and author of the highly acclaimed true crime titles Druglord and Powder Wars (both published by Mainstream). --This text refers to an alternate kindle_edition edition.

Matt Nixson
5.0 out of 5 stars Deeply thought-provoking
Reviewed in the United Kingdom on 27 April 2013
Verified Purchase
Don't be put off by the headline of my review, this is a truly sensational book but - unlike author and self-proclaimed former 'tabloid terrorist' Graham Johnson - I'm not in the business of hype! Johnson writes engagingly and openly about his trade, sometimes with jaw-dropping honesty. Hack specifically details his time at the News of the World and, later, at the Sunday Mirror, and some of his admissions are genuinely astonishing - revealing the subterfuge, chicanery and, on occasions, sheer fabrication carried out by newspapers in the bad old days of Fleet Street. Some of his tabloid tales made me laugh out loud on the Tube, drawing strange glances from fellow travellers. Others made me mentally hold my head in my hands. Needless to say, this book is no hagiography, or rose-tinted, nostalgia-inducing memoir. Indeed, I suspect some hacks might well chide Johnson for lifting the lid on the dark arts behind the headlines. In the current climate of crackdown, amid 6am police raids on journalists and general ill-will towards the tabloids, he's certainly a brave man to do so. I've no doubt some of his former colleagues are languishing on police bail for far less, though I should make clear, as Johnson does, that he did not get mixed up in the bête noir that is phone hacking and the events of this book mostly pre-date the period now under scrutiny. What is clear is that Johnson was an exceptional reporter, albeit one who buckled under the pressure, falling into some pretty questionable behaviour. I don't believe he is an every-journalist in any sense. I have always thought newspapers were a bit like sausages; no matter how tasty, you really don't want to see what goes into making them. Having said that, this is a brilliant, thought-provoking read and I'd heartily recommend it.
Read more
8 people found this helpful
Report abuse

Ms GeeGee
3.0 out of 5 stars I'd rather not 'Hear All About It...'
Reviewed in the United Kingdom on 19 January 2016
Verified Purchase
Very contradictory in places, one minute Rebekah doesn't like him, two chapters later he's telling us how he was her golden boy and how his colleagues hated him for it. I kept skipping pages until I saw a name I recognised and would read that paragraph and skip off again. If you want to read about 'drug barons' 'page three girls' or how other 'hacks' glare at each other menacingly across their desks whilst trying to put expenses in to keep 'kiss and tell' birds locked up in a hotel out of sight and sound of other papers so they can get their story this book is for you. If you prefer reality and not some bloke trying to make himself into a cloak and dagger James Bond type character who lives in a bedsit this isn't for you. Wish I'd have saved my money.
Read more
One person found this helpful
Report abuse

Nick M
5.0 out of 5 stars The best book to understand the culture that destroyed the NOTW
Reviewed in the United Kingdom on 21 November 2015
Verified Purchase
Books about media misconduct, particularly at the now defunct News of the World are very common. None are as revealing or as funny as this book. This is a snapshot of Graham’s two years at News of the World that thoroughly destroys the notion of a ‘golden age of fleet street/tabloid journalism’ ended by an overzealous Guardian or the rise of online journalism

Two highlights from the book are the hilarious account of the stunting up of the ‘Beast of Bodmin moor’ hoax that got Graham sacked from the News of the World. When you understand how the pressure for sensational stories and disregard for the truth made Graham willing to sell his newspaper what would have been one of the biggest hoaxes in journalism’s history, you can understand how that same pressure created a culture of phone hacking and corruption of public officials that would eventually destroy the NOTW.

The second is the portrayal of Rebekah Brooks- she flits on and off the stage but no other account has captured the combination of charm, menace and ruthless ambition that has propelled her to the top.

Steve Wilson
5.0 out of 5 stars Interesting insight into how the riff-raff run the red top newspapers
Reviewed in the United Kingdom on 7 June 2014
Verified Purchase
Graham Johnson tells it as it was for him as a junior "investigative" hack at News International. It explains what motivates some of the personalities who ran the News Of The World, charts Johnson's gradual rise inside the paper and includes the hilarious tale of how his career at News International came to an end.

Could tell you more, but that would take the fun out of reading this tome. Will be interesting to see what the verdicts are on Rebekah Brooks, Andy Coulson and Co are in the ongoing interminably long phone hacking and perverting the course of justice trial.
Read more
Report abuse

David Clark
5.0 out of 5 stars a great read.
Reviewed in the United Kingdom on 27 November 2013
Verified Purchase
I will be honest,I only bought this as it was 99p and I had a bit of time on my hands during a Sunday.However once I started reading it was very difficult to put down.True Mr Johnson even in his book says he made a few stories up,so even if only a snippet of his book is true then we need to take all news in papers with a pinch of salt.Although he doesn't go too much into the phone hacking scandal,his snippets of information make all of it more than possible.For a book that was going to keep me occupied for a week or so didn't,a great read.
Read more
One person found this helpful
Report abuse
See all reviews
Get FREE delivery with Amazon Prime
Prime members enjoy FREE Delivery and exclusive access to movies, TV shows, music, Kindle e-books, Twitch Prime, and more.
> Get Started
Back to top
Get to Know Us
Make Money with Us
Let Us Help You
And don't forget:
© 1996-2020, Amazon.com, Inc. or its affiliates