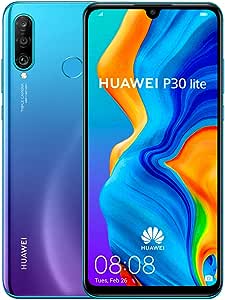 Every face is different and unique. Huawei ai-driven selfie technology beautifies your self-portraits based on your unique face shape and type. The technology maps the contours of your features and creates a custom algorithm to ensure you always show your best side. Broaden your perspective with the Huawei P30 Lite's 120 Degree ultra-wide angle lens and capture expansive landscapes in stunning shots that leave nothing out of sight. Shoot without limits. See, do and create more with the all-new Huawei P30 Lite.

4.6 out of 5 stars
4.6 out of 5
306 global ratings
How are ratings calculated?
To calculate the overall star rating and percentage breakdown by star, we don’t use a simple average. Instead, our system considers things like how recent a review is and if the reviewer bought the item on Amazon. It also analyses reviews to verify trustworthiness.

Vickko
3.0 out of 5 stars Pretty useless phone especially if you're a hi-tech person
Reviewed in the United Kingdom on 3 September 2020
Colour Name: BlueStyle Name: P30 Lite 256 GBVerified Purchase
I bought this fone because i saw a friend of mine with it. Typing and keyboard was lovely so i thought i should give it a go. Bad things about it first; It doesn't have a good player, thank goodness i have a samsung galaxy 10 if not, i would have just returned this fone. The music player is completely useless and you can't even unistall it. When you load music as a file, normally with good fones, you should be able to select sound picker like on samsung and then use the music search engine to type in the song you want, rather than scrolling from top to bottom of thousands of songs 🙄. This fone is like that.
You can't edit a video in its gallery. I can't believe this. Now i respect samsung s10e. The little things i used to underrate. You can't edit a simple video anywhere on this phone unless maybe you install an app which i didn't try.
If you use instagram, this phone is not good for loading, it makes the IGTV videos out of diameter. But when i used my samsung, it's perfect.
You know like samsung has the search option on the emoji box, this one doesn't. You have to scroll through and get what you are looking for but on my samsung i can search the emojis and type in, for example, pointing, and all the pointing fingers up and down and left and right will pop up and i choose which one i want.
And then, some of the apps i transferred to it which are not even samsung specific won't work on it.
These are the few i've discovered. I'm pretty sure there are many more flaws. It can't beat samsung. Not even the cheapest samsung galaxy!
Now the things i like about it are the fact that it has a tiny glowing light like samsung galaxy s6 when you have missed calls or messages. The screen is big and typing is sweet and auto corrections are made so perfectly. Camera is definitely better than the samsung s10. It has it's on dedicated thing like samsung so it has its own step counter, voice recorder, etc. I prefer using it to surf than my samsung 10e.
I got the 250GB one so ample storage cos i do a lot of videos and music. One thing you will definitely enjoy on this fone is typing which is what attracted me in the first place, not knowing it's a crappy fone, sort of.
The call page has a lot of features samsung doesn't have, like notes, calender, hold call, add, mute. Samsung doesn't have notes and calender. This fone has speed dial too though i don't use it. Every other thing is fine. It connects to my bluetooth in the car and to my Bose sounds 20 and 30 series and bluetooth earpieces tho it took some time before we got to that 🙄. Quite tall, i think it's 6.2inches. This phone will be very good for someone who just wants to make calls and maybe send whatsapps and surf internet. If you want to use it for more complax runs like you do music or more demanding task, this fone will frustrate you. I won't recommend for you. I will look for a better fone with better music player functions. There's nothing interactive about this fone, everything is kinda annoying. Well, i shoud have known that £250 phone wasn't gonna be that great.

Gez
5.0 out of 5 stars Easy to use plenty of Storage
Reviewed in the United Kingdom on 11 July 2020
Colour Name: BlueStyle Name: P30 Lite 256 GBVerified Purchase
Had this since april and am very happy with it.phone looks good,decent size and easy to use single handed. Cameras are very good , colour and quality to me is good. Like the memory no chance of wlowing down, not had any problem with using it on android and its fast.easy to navigate thru the phone. Very happy with the purchase?
Read more
2 people found this helpful
Report abuse

angharad mardon
5.0 out of 5 stars Beautiful, sleek and pretty clever
Reviewed in the United Kingdom on 11 January 2021
Colour Name: BlueStyle Name: P30 Lite 256 GBVerified Purchase
I love this phone already. Set up is so quick and easy. Amazing colours on the phones casing. The camera is every selfie loving person dream. Clear and precise. Battery so far is holding charge better than any other phone I've ever purchased in the past. To be honest this phone is going to be the only one I will look towards if I needed to buy a phone in the future. And it was a bargain price with £100 off the rrp.
Read more
Report abuse

PSB36
5.0 out of 5 stars Good quality phone for a fraction of the price of other phones
Reviewed in the United Kingdom on 22 October 2020
Colour Name: BlueStyle Name: P30 Lite 256 GBVerified Purchase
I've already got one of these phones they are excellent knock spot's of the iPhone especially regarding the battery life and storage capacity and are fast to use, and the fact that you can add more storage is another bonus.
The only negative was the fact that amazon's driver delivered the phone to the wrong address, and the driver had the audicity to say he handed it to me in person.
Probably was resolved 3 Hours later when a guy at the other end of the village delivered the phone
Read more
Report abuse

Robert Smith
5.0 out of 5 stars Really nice phone
Reviewed in the United Kingdom on 30 October 2020
Colour Name: BlueStyle Name: P30 Lite 256 GBVerified Purchase
Looks and feels really nice and has lots of useful features. Took a bit of getting used to because I have had Samsung phones for years and finding my way around the different operations took a little while but no problem in the end. I have a Huawei watch as well and have had that for years with no problems at all absolutely love that you get a lot for your money when compared with other overpriced manufactures.
Would have no hesitation at all with recommending.
Read more
Report abuse
See all reviews
Get FREE delivery with Amazon Prime
Prime members enjoy FREE Delivery and exclusive access to movies, TV shows, music, Kindle e-books, Twitch Prime, and more.
> Get Started
Back to top
Get to Know Us
Make Money with Us
Let Us Help You
And don't forget:
© 1996-2020, Amazon.com, Inc. or its affiliates