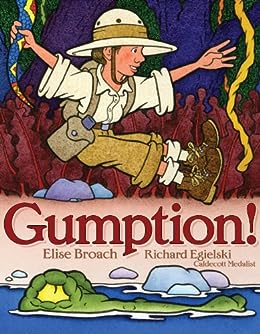 Peter's Uncle Nigel, explorer by trade, knows how to show his nephew a good time. When next he sets off to Africa to find the Zimbobo Mountain Gorilla, young Peter is right by his side. There are lots of dangers lurking in the wild, however, and whenever Peter calls upon his uncle for help he's met with a jolly, "Nonsense, my boy! All it takes is a bit of gumption." Peter soon finds his way, swinging on pythons, leaping on crocs and even catching a ride on the back of the gorilla itself, while his oblivious uncle charges onward. Broach fills this spunky story with delicious language, including words like "zonked" and "dung." Egielski is in fine form, his boldly outlined watercolors fairly luminous and bursting with life. Readers who keep their eyes open wider than Uncle Nigel will also discover a host of delicate details hidden within the images. Altogether a hearty delight for any young adventurer with a drop or two of gumption. (Picture book. 4-8) -- KIRKUS, March 15, 2010

When Peter's favorite Uncle Nigel takes him on an expedition to Africa, their first goal is to see a "Zimbobo Mountain Gorilla." As Peter struggles during their five-mile hike, good-natured Uncle Nigel insists that he can do it, telling him, "All it takes is a bit of gumption." The book's humor is provided by Egielski's (The Fabulous Feud of Gilbert and Sullivan) expert watercolors that show Uncle Nigel's upbeat obliviousness while Peter gets a helping hand from some wild animals in nearly wordless four-panel scenes (a snake, elephant, and one of the rare gorillas help him negotiate the terrain, and later Peter rescues his uncle from an alligator). Throughout, Uncle Nigel is totally unaware of the danger. Broach (When Dinosaurs Came with Everything) plays with the familiar British explorer stereotype (Uncle Nigel gets plenty of lines like "Jolly good, Peter!" and "I say! Elephant dung!"), and Egielski's twig-bordered paintings have a Teddy Roosevelt adventurousness that will keep readers giggling at how hapless some grownups--and how resourceful some children--can be. Ages 4-8. March 8, 2010 - Publishers Weekly --This text refers to the hardcover edition.

Elise Broach lives with her family in rural Connecticut, where she writes books for children and teens, including When Dinosaurs Came With Everything, Shakespeare's Secret, and Wet Dog!, and serves in town government. Visit Elise at EliseBroach.com.

Richard Egielski received the Caldecott Medal for his illustrations in Hey, Al, written with Arthur Yorinks. His other books include Gumption by Elise Broach, and Buz and Jazper, which were chosen as New York Times Best Illustrated Books for Children. He lives with his wife and son in Milford, New Jersey. --This text refers to the hardcover edition.

Jayashree
5.0 out of 5 stars Good
Reviewed in India on 18 June 2019
Verified Purchase
This book was good to read for kids who are budding to read and adapting to reading habits. Way to go
Read more
Report abuse

David Barnett
1.0 out of 5 stars Unhappy
Reviewed in the United States on 19 October 2020
Verified Purchase
When I received the book, there were torn 6 pages. This was not listed in the review. The outside looks good but the inside was not mentioned. Not satisfied!
Read more
Report abuse

Martha Gaylor
5.0 out of 5 stars and was a great
Reviewed in the United States on 19 October 2016
Verified Purchase
This book was shipped very quickly, and was a great price
Read more
Report abuse

Amanda Davis
2.0 out of 5 stars Title is misleading
Reviewed in the United States on 1 September 2013
Verified Purchase
The title is wonderful but the book does little to really help a child or readers understand the real meaning of the word gumption. This book has wonderful pictures but the reader must really inference what this book is about.
Read more
Report abuse

Cynthia M. Hopp
5.0 out of 5 stars Makes me want to have Gumption!
Reviewed in the United States on 11 June 2017
Verified Purchase
This book was fun-filled and full of great vocabulary!
Read more
Report abuse
See all reviews
Back to top
Get to Know Us
Make Money with Us
Let Us Help You
And don't forget:
© 1996-2021, Amazon.com, Inc. or its affiliates