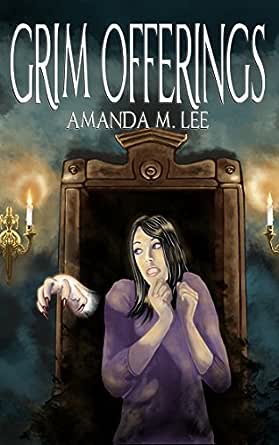 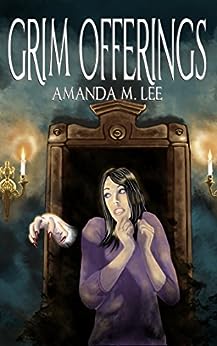 Grim and bear it.

Being a grim reaper isn’t easy, but answering to family is even worse.
Between argumentative souls, overbearing older brothers and everyday nonsense, Aisling Grimlock has her hands full.
When a run-of-the-mill job goes awry, Aisling finds herself in a mess. The soul she was supposed to collect is still amongst the living, and the man who wanted to kill him is dead instead.
Detective Griffin Taylor is returning from an undercover assignment, and the first thing he wants to do is reconnect with Aisling. Her brother Aidan is giving him fits, though, and the rest of the family isn’t making things much easier.
When wraiths start showing up again, and a member of the Grimlock family is seriously hurt, it’s all hands on deck for the final showdown. Unfortunately for the Grimlocks, they can never do anything the normal way.
Aisling is chafing under worry and pressure, and her family is circling the wagons. It’s going to take everyone working together to survive – and when the final fight is finally waged, a huge secret is revealed that will change the Grimlocks’ world forever.

Note: This is the second book in the Aisling Grimlock paranormal mystery series.

Elisa
TOP 50 REVIEWER
5.0 out of 5 stars Just keeps getting better
10 August 2015
Format: Kindle EditionVerified Purchase
Amanda m lee is the queen of sarcastic humor her books are seriously funny I just can't get enough for them and Aisling Grimlock is no exception such an awesome character and I just love her family I just can't put her books down
Read more
Helpful
Comment Report abuse

Theresa
4.0 out of 5 stars Complete hilarity from start to finish...
6 February 2019 - Published on Amazon.com
Format: Kindle EditionVerified Purchase
4.5 Stars... A fun, light, laugh out loud read that takes us into the heart of the Grimlock family... Having four older brothers is a case for survival of the fittest for Aisling Grimlock; add in an overprotective boyfriend and the sass and wit become a necessary weapon... Between battling deadly wraiths, a childhood nemesis, and a creepy conman Aisling certainly has her hands full, but when the hidden enemy pulling all the strings is revealed Aisling's world is shattered... Being in the mix of this crazy family was simply enjoyable from start to finish... I am looking forward to continuing the series and seeing how the storyline unfolds:)
Read more

Mikesgirl
4.0 out of 5 stars Almost five stars
1 April 2015 - Published on Amazon.com
Format: Kindle EditionVerified Purchase
I love the witches of Midwest series and was instantly smitten with the Grimlock series. I took one star off because 90% of the book was witty bantering, which after a while sounded more like constant arguing. Most of the Witches series has some of that type of dialogue which I find to be amusing. But, when most of the book is that way, it loses the cuteness and becomes annoying.

Also, Griffin's sister was described in the beginning of the book as being a doctor, then later is referred to as a nurse. I couldn't figure out which was correct. I was convinced she was a nurse, but then her knowledge of Psychiatry was much more indicative of what would be expected of a doctor.

Anyway, I like Maya and think perhaps Aishling has finally found a girlfriend! I'm looking forward to the next one.

Jaye
5.0 out of 5 stars It's funny, snarky and sarcastic
26 March 2015 - Published on Amazon.com
Format: Kindle EditionVerified Purchase
I waited patiently for this book after reading the 1st one.The idea of a family of Reapers is unique. It's funny, snarky and sarcastic. I really enjoyed reading about Aisling, friends and family. I do wish sometimes that Aisling didn't throw quite so many temper tantrums but she can definitely hold her own with her family which is all male. She's no slouch in the family business either. The love and loyalty in the Grimlock family is definitely there. Ms. Lee is awesome in painting a picture using words to transport you to each scene in the book. So, Ms. Lee, when's the next one coming?
Read more
2 people found this helpful

XtraDev
4.0 out of 5 stars An interesting and fun read
5 April 2015 - Published on Amazon.com
Format: Kindle EditionVerified Purchase
I enjoyed this book more at the end than I did at the beginning. It started moving quickly, but there are a few more characters in this book than needed. Once they were eliminated, the book moved faster.
I like Aisling. She's a bit of a whiner, but for the most part not a bad character. I'm still not sure how I feel about her boyfriend. And, I'm not sure how the author feels about Griffin either. He doesn't feel like the best boyfriend for the protagonist, but the one that is best for the moment. Love the close knit family, love the interplay between the siblings, but sometimes the dialog feels a bit forced.
All that said, I enjoyed the book and am looking forward to the next one. I'm curious to see what the author will do next.

Doc
5.0 out of 5 stars Book Two Is Just As Good As Book One
23 March 2015 - Published on Amazon.com
Format: Kindle EditionVerified Purchase
Meet Aisling Grimlock reluctant reaper, devoted sister and a member of one of the most dysfunctional families ever. This is the second in the series and a great addition. This is probably not for the purist fantasy fan but, if you like your fantasy humorous with a large dose of Snark this will be for you.
Ms. Lee is the author of several series normal and paranormal. All bear her trademark humor and a twisted sense of humor it is. So if you are looking for pure escapism where the heroine says all the things you wish you could give this series a try.
My only problem with the series is the wait between book.


Read more
2 people found this helpful
Go to Amazon.com to see all 268 reviews 4.7 out of 5 stars
Get FREE delivery with Amazon Prime
Prime members enjoy FREE Delivery and exclusive access to movies, TV shows, music, Kindle e-books, Twitch Prime, and more.
> Get Started
Back to top
Get to Know Us
Make Money with Us
Let Us Help You
And don't forget:
© 1996-2020, Amazon.com, Inc. or its affiliates