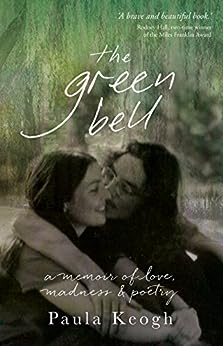 by Paula Keogh (Author) Format: Kindle Edition
See all formats and editions
Sorry, there was a problem loading this page. Try again.
It’s 1972 in Canberra. Michael Dransfield is being treated for a drug addiction; Paula Keogh is delusional and grief-stricken. They meet in a psychiatric unit of the Canberra Hospital and instantly fall in love.
Paula recovers a self that she thought was lost; Michael, a radical poet, is caught up in a rush of creative energy and writes poems that become The Second Month of Spring. Together, they plan for ‘a wedding, marriage, kids – the whole trip’. But outside the hospital walls, madness, grief and drugs challenge their luminous dream. Can their love survive?
The Green Bell is a lyrical and profoundly moving story about love and madness. It explores the ways that extreme experience can change us: expose our terrors and open us to ecstasy for the sake of a truer life, a reconciliation with who we are. Ultimately, the memoir reveals itself to be a hymn to life. A requiem for lost friends. A coming of age story that takes a lifetime.
Read more
Previous page
Next page

One of the most beautifully written and wisest memoirs I have ever read. - The Sydney Morning HeraldA kind of radiance illuminates this beautiful book. - The Guardian[The Green Bell is] Paula Keogh's heart-searching quest to understand the schizophrenia afflicting her. She has written a brave and beautiful book. - Rodney Hall, two-time winner of the Miles Franklin --This text refers to an alternate kindle_edition edition.

One of the most beautifully written and wisest memoirs I have ever read. - The Sydney Morning HeraldA kind of radiance illuminates this beautiful book. - The Guardian[The Green Bell is] Paula Keogh's heart-searching quest to understand the schizophrenia afflicting her. She has written a brave and beautiful book. - Rodney Hall, two-time winner of the Miles Franklin --This text refers to an alternate kindle_edition edition.

Paula Keogh has a PhD in creative writing from La Trobe University and received the 2015 Affirm Press Mentorship Award for the development of THE GREEN BELL at Varuna the National Writers House. She taught at RMIT University for nine years, and has lived in Canberra, Adelaide and Toronto, but considers Melbourne home. She is currently working full-time on her writing. --This text refers to an alternate kindle_edition edition.
Read more

Amazon Customer
5.0 out of 5 stars An amazing, coherent and courageous story of recovery
Reviewed in Australia on 31 August 2020
Verified Purchase
The Green Bell is an extraordinary memoir of Paula Teogh’s struggle with and ultimate triumph over psychosis and loss. Teogh’s journey of recovery of her sense of self is inspiring and instructional. Teoh tells of a naive, 1970s Canberra, her relationship with Michael Dransfield and meeting the royalty of Australian poets. This is a story of love, infidelity, a struggle with madness and loss. Teoh ultimately emerges having made considerable achievements in her life but a strong and alive sense of who she is.
Read more
Helpful
Report abuse

peter mcgrady
5.0 out of 5 stars Wonderful evocative a master piece
Reviewed in Australia on 21 August 2021
Verified Purchase
Pamela keoghs book evokes the spirit of the late 60s and early 70s michael dransfield comes alive in this deeply personal memoir of love lost and eventually regained. Dransfield and her friend juluanne haunt the readers imagination long after reading the book which takes us in dransfields words to the ' uplands of the spirit'.
Read more
Helpful
Report abuse

Choppo Kiama
5.0 out of 5 stars A story of painful love.
Reviewed in Australia on 31 October 2021
Verified Purchase
A beautifully written true love story against all odds. An insight to living with mental illness.
Read more
Helpful
Report abuse

Pam Drury
5.0 out of 5 stars Five Stars
Reviewed in Australia on 7 June 2017
Verified Purchase
Fantastic insightful read a must for everyone.
Read more
One person found this helpful
Helpful
Report abuse

Jennifer
TOP 10 REVIEWER
5.0 out of 5 stars ‘In the process of remembering, I discovered that memories draw on both reality and imagination to recreate the dramas ...
Reviewed in Australia on 9 April 2018
... that make up what remains of our past.’

In 1972, Paula Keogh meets Michael Dransfield while both are patients in the psychiatric ward (known as M Ward) of the Canberra Hospital. Paula is both delusional and grief-stricken. Her close friend Julianne Gilroy had died in a Sydney psychiatric institution in 1968. Michael is being treated for drug addiction. Michael and Paula fall in love. They find a safe space, hidden from the world, under one of the willow trees lining Lake Burley Griffin near the hospital. This is the ‘Green Bell’ of the title.

‘When I was a small child, I knew that another world existed beyond the one I was familiar with.’

Paula finds a less fractured self, while Michael is inspired to write more of his poetry. Together, in the comparative safety of the Canberra Hospital’s M Ward, they plan for a future together.
This memoir is an account of the brief period (less than two years) that Paula and Michael had together. It’s an account of madness, from the perspective of someone diagnosed with schizophrenia, suffering from hallucination, lost in delusion, revisited some forty years later. It’s an account of optimism, of two vulnerable but kindred spirits briefly sharing a path.

I found this memoir unsettling: I have my own recollections of psychiatric institutions during the 1970s, my own ghosts to settle. I also found this memoir uplifting: Paula Keogh has survived and made a life for herself. It must have been difficult for her to return to 1972, to these memories and the associated pain. I moved to Canberra in 1974 and am familiar with the Canberra Ms Keogh describes, and some of the poets named. I can visualise ‘The Green Bell’ and remember M Ward. And as I move through those memories, I think I need to revisit some of Michael Dransfield’s poetry, now that I have a deeper understanding of the circumstances in which it was written.

‘Listening to this concerto, I come to understand madness in a new way. In one of its guises, madness is bondage to a reality that’s insular and personal. It offers you the kind of truth you see when you’re in pieces: a broken, defeated sort of truth.’

Kindle Customer
5.0 out of 5 stars Superbly written book
Reviewed in the United States on 24 July 2019
Verified Purchase
I really enjoyed this memoir by Paula Keogh. The days of the 60s and 70s counter-culture in Australia had faded for me, but this story took me straight back to that world of share houses, university, record players and incense. Keogh's ability to recall detail is amazing! It rekindled the beauty of poetry for me, too., for which I'm grateful. The writing style is just sublime.
Read more
One person found this helpful
Report abuse

Francesca
5.0 out of 5 stars Insight.
Reviewed in the United States on 14 November 2019
Verified Purchase
this book gives such wonderful insight into the poet Michael Dransfield. It is very well written.
Read more
Report abuse