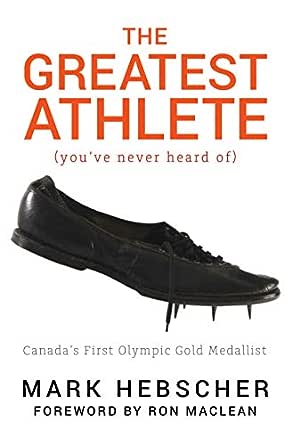 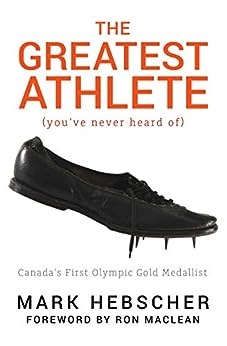 A fascinating book about an extraordinary sporting figure that darts through history while bleeding with the passions of the author. Intimate despite the distance of a forgotten age, and personal in the investment Hebsy makes to pursue Orton's ghost.--Dave Bidini, author of Midnight Light and publisher of the West End Phoenix

Always a fount of sports knowledge and trivia, Hebscher sets the record straight on a great Canadian athlete long overlooked or forgotten altogether. An entertaining and informative read. Mark's high-energy personality and unbridled love for sport shine through on every page.--Rob Baker, The Tragically Hip guitarist

Chasing ghosts is a mug's game. Moreso when the ghost is a world-class turn-of-the-century runner. But Mark Hebscher is dogged, tracking down the bizarrely under-told story of Canadian athletic legend George Orton, a steeplechase phenom who knew something about pace. As does author Hebscher. His book is a commendable yarn and a race to the finish.--Brad Wheeler, arts writer, the Globe and Mail

Due to the limits of the English language, the jacket of this book can't possibly prepare the reader for what I guarantee is a wild ride. George Washington Orton somehow landed in history's dustbin - obscurity doesn't quite capture it. Thank God Mark Hebscher rescued the most unlikely sports story I've read in years.--Gare Joyce, author of The Code and Every Spring A Parade Down Bay Street

Hebsy has written an incredibly detailed and intriguing story of Canadian George Washington Orton. As an Olympian, I always find it fascinating to hear stories of athletes in my sport and see where our training and traditions originated. Washington was the first to introduce the use of a stopwatch to ensure proper pacing - something I use in all my distance training. But his amazing story goes beyond track and field. His work and skill in hockey and soccer, as well as his intellect (fluent in nine languages), are beyond compare. Highly recommended reading for all Canadians and all those interested in sport.--Damian Warner, 2016 Olympic Bronze Decathlon, Pan Am and Commonwealth Games gold-medal decathlete

I liked that you mixed in other sports, like Jack Dempsey boxing and Man O'War and horse racing. That Orton was some kind of guy. Too bad he didn't spend more time in Canada or we'd all know about him. Great story, though.--Don Cherry, Hockey Night in Canada

Kudos to Mark Hebscher for discovering a long-forgotten Canadian hero as the subject of his first book. George Washington Orton was a true Renaissance man - a great athlete, scholar, writer, teacher and many other things - whose story is fascinating. This book is well worth your time.--David Shoalts, sportswriter for the Globe and Mail and author of Hockey Fight in Canada

Mark Hebscher has brought to life George Washington Orton for all of us to enjoy with his book The Greatest Athlete. Mark's research and writing skills combined with his finding so many historic pictures capture a person and a time that had escaped us. A job well done.--Jerry Howarth, veteran Toronto Blue Jays broadcaster

The best historians must also be good detectives. Mark Hebscher proves here that he's both, casting aside Canadian modesty to celebrate the somehow-obscure story of an Ontario kid who went on to change the face of sports around the world. Hebscher does so in the same conversational way that made him a beloved broadcasting legend; you can hear the incredulity in his voice leap off the page as he unspools this inspiring tale that has been neglected in the annals of sports history. This isn't just for jocks, far from it: I don't even like sports, but in the hands of Hebscher, this is a total page-turner.--Michael Barclay, author of The Never-Ending Present: The Story of Gord Downie and the Tragically Hip

There's a generation that thinks everything that ever happened can be Googled. It can't. History is hard work. In The Greatest Athlete (You've Never Heard Of), a hard-working Mark Hebscher tells the story of George Washington Orton and tells stories about his story - including the story of Canada's own slow embrace of self-identity and pride in its own.--Jim Slotek, journalist --This text refers to the paperback edition.

Mark Hebscher is a long-time broadcaster and journalist, best known for his work on the ground-breaking TV show Sportsline on Global Television. Mark has interviewed thousands of people from the world of sports, entertainment, business, and politics. He lives in Toronto.

Norman Campbell
5.0 out of 5 stars -
Reviewed in Canada on 25 July 2020
Verified Purchase
-
Read more
Report abuse
See all reviews
Get FREE delivery with Amazon Prime
Prime members enjoy FREE Delivery and exclusive access to movies, TV shows, music, Kindle e-books, Twitch Prime, and more.
> Get Started
Back to top
Get to Know Us
Make Money with Us
Let Us Help You
And don't forget:
© 1996-2020, Amazon.com, Inc. or its affiliates