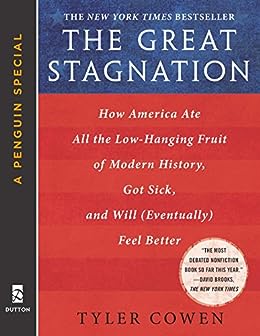 The Great Stagnation: How America Ate All The Low-Hanging Fruit of Modern History, Got Sick, and Will (Eventually) Feel Better: A Penguin eSpecial from Dutton Kindle Edition

Tyler Cowen, PhD, holds the Holbert C. Harris chair in economics at George Mason University. He is the author of several books, including the New York Times bestseller The Great Stagnation, and a number of academic books. He writes the mos- read economics blog worldwide, marginalrevolution.com. He has written regularly for the New York Times and contributes to a wide number of newspapers and periodicals.

4.0 out of 5 stars
4 out of 5
141 global ratings
How are ratings calculated?
To calculate the overall star rating and percentage breakdown by star, we don’t use a simple average. Instead, our system considers things like how recent a review is and if the reviewer bought the item on Amazon. It also analyses reviews to verify trustworthiness.

liamado
2.0 out of 5 stars Well written nonsense
Reviewed in the United Kingdom on 10 September 2018
Verified Purchase
Cowen has an engaging writing style, but not enough to distract from the drivellous content. He identifies an interesting point about innovation, but his explanations for it sound more like the ramblings of a pensioner complaining about how 'things were better in the old days'. His constant berating of the left is tiresome and unhelpful. His 'solution' that we should 'value scientists more' is bizzarre and he puts forward no suggestions as to how to achieve it. I found this book referenced and decided to give it a look, but I quite regret the time wasted. Luckily it's only a quick read
Read more
Report abuse

Amazon Customer
3.0 out of 5 stars some good insights - but tends to be repetitive after a while...
Reviewed in the United Kingdom on 25 June 2013
Verified Purchase
Some good ideas and observations. Not so well put forward as after a few pages it sounds a bit like a broken record player: no more low hanging fruit, no more low hanging fruit, no more...
Read more
One person found this helpful
Report abuse

Anglian Traveller
4.0 out of 5 stars Tyler Cowen brings a fresh perspective to economic slowdown in an easy-read text
Reviewed in the United Kingdom on 17 October 2011
Verified Purchase
Tyler Cowen's `The Great Stagnation' is less a full-length book than an extended essay which attempts to explain current economic and median-income stagnation in the USA, and what might happen in the future. The author's basic idea is that between 1880 and 1970 the USA benefited from an abundance of `low-hanging fruit': almost limitless land resources relative to population; technological breakthroughs like electricity, indoor plumbing, railroads, automobiles, radio, telephones, tape recorders, mass production and the availability of reliably tested pharmaceuticals; and a continuous supply of first-generation immigrant labor to do all the hard jobs at low rates of pay. This party is now over, and the hangover has set in.

Cowen's analysis of historical trends in technological innovation reveals a plateau since the 1970s in the adoption and wide dissemination of useful new technologies: i.e. like in the 1970s we still drive cars powered by gasoline, and use refrigerators and TVs; they're just incrementally improved but not radically different in concept. Now they're made elsewhere in the world by newly industrialised economies which have imitated the industrial practices of the US and Europe, and are imported rather than home-produced. The newer technologies like the internet and cell phones are for communications, and don't need a lot of workers to run them.

The author goes on to analyse the incremental value of increasing spend on education, which he sees as offering diminishing economic returns, and writes an excellent section analysing healthcare spending - again, beyond a certain point doubling spending offers smaller and smaller incremental returns in health benefits. Cowen uses a graph to demonstrate that although every major European country has a total healthcare expenditure per capita of less than half that of the USA, they all have longer life-expectancy and lower infant mortality - so it's not to do with money per se, but how things are done and how the money is used.

The author's fix-it ideas include raising the social esteem in which scientists are held: well, amen to that, but is that really going to make a big difference? The biggest earners in the USA are now in the financial sector. Trading credit default swaps, derivatives and securitised financial products may enrich the tiny part of the workforce concerned with such chimera, but they tend to relatively impoverish everyone else and do not spread wealth around as in the industrial age, when millions of people were employed in designing and making real, useful things which improved people's lives and which everybody wanted. Cowen predicts we might be in for a longer and deeper economic recession before new scientific innovations can renew society again, and that the rate of progress will remain uneven and people might "look back to the current era with a gloss of nostalgia" - hardly an optimistic prognosis.

The text of this hardcover was originally an e-book, printed to take in new audiences and offer a more permanent artefact than an online blog. Despite its shortcomings its 89 pages present punchy, lucid arguments and make for an easy read of a few hours, brevity and clarity among its chief recommendations.
Read more
5 people found this helpful
Report abuse
See all reviews
Back to top
Get to Know Us
Make Money with Us
Let Us Help You
And don't forget:
© 1996-2021, Amazon.com, Inc. or its affiliates