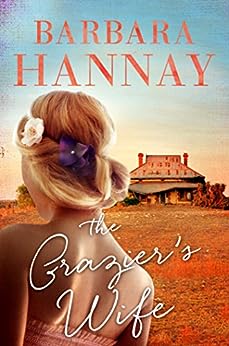 "the perfect summer book."--Historical Novel Review
--This text refers to the paperback edition.

The evocative new outback saga from the internationally bestselling and award-winning romance novelist of Zoe's Muster and The Secret Years. --This text refers to the paperback edition.

Barbara lives in Townsville with her writer husband and enjoys being close to the Coral Sea, the stunning tropical scenery and colourful characters, all of which find their way into her popular stories. --This text refers to the paperback edition.
Read more

Jo-Ann
5.0 out of 5 stars Beautifully written
Reviewed in Australia on 7 August 2016
Verified Purchase
I love stories like this, how they flick from early war years to the present. I couldn't put it down.
Read more
One person found this helpful
Helpful
Report abuse

Maria Parenti
4.0 out of 5 stars A Revetting Rural Romance
Reviewed in Australia on 16 October 2016
Verified Purchase
Wonderful generational story. Secrecy in a sideboard leads to a delicate family decision. Secrecy from her childhood could lose the love of life.
Read more
One person found this helpful
Helpful
Report abuse

Nanette Smith
5.0 out of 5 stars The story really resonated.
Reviewed in Australia on 17 December 2018
Verified Purchase
It grabbed me from the start and couldn't put it down. A great read. Looking gforward to more of her stories.
Read more
Helpful
Report abuse

Marcia@Book Muster Down Under
5.0 out of 5 stars A story about family, forgiveness, healing the past and hoping for the future
Reviewed in Australia on 14 September 2016
A legacy is at risk in this appealing new novel from Barbara Hannay featuring a lost letter and family secrets.

When Alice Miller arrives in the small town of Burralea in the Atherton Tablelands to make a new start after her grandmother’s death, she’s looking forward to opening her antique restoration business and the last thing she’s expecting is to be swept up into another family’s upheaval, when Jackie Drummond asks her to refurbish an old family heirloom in time for her husband, Hugh’s, 65th birthday party.

There’s nothing better than stories with secrets (well, in my opinion that is!) and Barbara Hannay’s novels have that in spades. I’ve read a number of her books now but none of them have quite captured me as much as The Grazier’s Wife did.

The blurb alludes to a “sweeping, emotional saga” and you can believe me when I say that it’s exactly what the reader is going to get! I was so emotionally involved in these characters lives (yes - every. single. one. of. them.) that I didn’t want this story to end and I especially related to Alice and Seth’s story – her valid angst at the reasons she has for not getting involved with him and his heartbreaking, almost acceptance, of the fact that there’s nothing he can do for her unless she wants to help herself.

When you read a Barbara Hannay novel, you just know that you’re going to get the best of two worlds – one set in the present day with a rural Australian background and the other set historically on a different continent and this one is no different.

Journeying from 1946 Singapore to present day Australia, the novel is written in two timelines interspersed with a third in the form of Stella’s journal entries. All three narratives are interesting and very well-developed but, for me, the real strength of this novel lies in Barbara’s incredible ability to make the past come alive through Stella’s journal and I found myself trapped in a time-slip that took me to the heartbreaking story of Stella, Tom and Magnus.

As always, Barbara does a great job of making her readers feel connected to her characters. Her descriptions of time and place also excel and she smoothly shifts between each timeline never losing her reader in the maze.

So, if you’re anything like me and enjoy a great story filled with flowing writing, warmth, endearing characters and secrets that echo through the generations, then this one is for you.

A story about family, forgiveness, healing the past and hoping for the future, this one comes highly recommended.

T. F. White
5.0 out of 5 stars I love historical fiction
Reviewed in the United Kingdom on 1 July 2018
Verified Purchase
I love historical fiction, and this wonderful Australian family saga fitted the bill perfectly. This was the first time that I have read this authors work,but since then I have read "The Country Wedding", and I am now reading "Moonlight Plains", both are excellent. I have also just ordered "The Secret Years", so looking forward to more wonderful stories from the far north of Australia.
Read more
Report abuse

Pamela Rogers
5.0 out of 5 stars Love conquers all!
Reviewed in the United Kingdom on 22 April 2017
Verified Purchase
I thoroughly enjoyed this book! The characters, their lives enthralled me. The ending gave me that - ahhhhh... Feeling - satisfied that there is always a light at the end of the tunnel!
Read more
Report abuse

Noelene
5.0 out of 5 stars Wonderful rural family saga
Reviewed in the United States on 14 July 2017
Verified Purchase
Barbara Hannah is a master storyteller and her books rarely disappoint. In this story, each family member has their own story and issues, all centering around the mystery papers found in an old sideboard being restored. The writing was lovely, each romance portrayed with depth and sensuality, the setting portrayed just enough to be intriguing and not overdone, and you just wanted to keep reading quickly to the end. Loved that ending by the way. A just conclusion for the oldest lovers. The whole read was fast paced, touching and human.
My only personal concern was the ragged unjustified edges in some ebooks. Makes the pages look untidy. Plus there were clearly words missing from the text and I dislike ending sentences with adverbs which should all have been picked up in the editing process. But a great read nonetheless.
Read more
One person found this helpful
Report abuse

Patto
5.0 out of 5 stars Great story with a touch of love, history and mistery
Reviewed in the United States on 9 October 2018
Verified Purchase
Could not put it down Barbara Hannay certainly knows how to capture the fine points and discribes things perfectly. Just finished the next chapter The Country Wedding and can't wait to read more.
Read more
Report abuse

elainejlenon
5.0 out of 5 stars Five Stars
Reviewed in the United States on 9 November 2016
Verified Purchase
Loved this book, characters were great and book was easy reading.
Read more
Report abuse
See all reviews
Back to top
Get to Know Us
Make Money with Us
Let Us Help You
And don't forget:
© 1996-2021, Amazon.com, Inc. or its affiliates