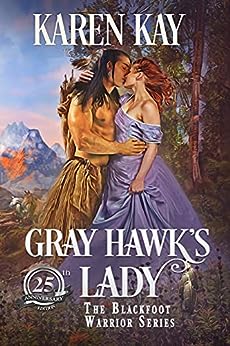 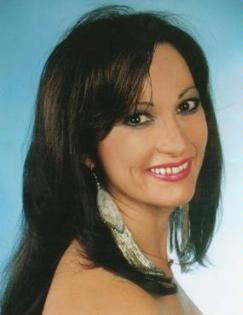 Jane Giddings
TOP 1000 REVIEWER
5.0 out of 5 stars Blackfoot.... Gray Hawks lady
Reviewed in Australia on 14 August 2015
Verified Purchase
Oh what a beautiful story and the history together with the ancestry of Indians made for such a wonderful read, thank you; loved the ending!
Read more
Helpful
Report abuse

Sandy
1.0 out of 5 stars Absolute rubbish
Reviewed in the United Kingdom on 8 November 2014
Verified Purchase
This is one of the worst American Indian romance novels that I have read.

I have read four other books by this author and they were excellent. I really do not know what happened with this one.

If I was Gray Hawk I would have dumped Genevieve instead of putting up with her flighty "aristocratic" asinine childishness.

Because Genevieve's father was a Lord (or whatever) and she was "Lady" Genevieve, one constantly had to read about the English upper crust and the "commoner" - who gives a rat's behind?

She captures him to take him back to her father In St. Louis for a few months or a year, without one moment of consideration about his feelings or commitment to his family - BUT she continuously tells him that she will not harm him, she will feed him, etc. Aaaaaaaaaaagh!!!

Why do these authors think that a "yes I love him" - "no I cannot be with him", "yes I want him" - "no I am not sure if I can live with him" is the way to write a romance? Yes, I am aware of the prejudice against the Indians at that time and what the white man was capable of doing when discovering a white woman with an Indian warrior. But once the woman falls in love with this wonderful, handsome, brave man, get on with it and commit yourself. Right up until the end of these books it is constantly "yes", "no", "yes", "no".

Also, why is it that these white women in these novels always try to leave the Indian camp by themselves, for whatever reason, thinking that they can travel hundreds of miles in hostile territory by themselves when in reality they could not navigate themselves out of a wet paper bag?

I do not believe that in real life an Indian warrior would have put up with a white woman continuously insulting him and being rude to him on so many levels. In these novels the Indian male is always kind, honourable, and incredibly loving and patient with his white woman, whereas the white woman is always portrayed as a stupid, brainless, spoiled, childish and rude person. How much of this can a man (or the reader) be expected to put up with?

If someone had continuously told me that they were not sure if they could live with me because I was a primitive savage, any love or feelings that I might have had for them would have dissipated very quickly.

I forced myself to read up to 80% of the book (on the Kindle) but I just could not finish it. I skipped to the last few pages and honestly it just made me want to scream!

Kindle Customer
4.0 out of 5 stars Gray Hawk's Lady (Blackfoot Warriors series) by Karen Kay
Reviewed in the United Kingdom on 25 May 2014
Verified Purchase
This is book 1 in the series.... I actually read book 2 first, White Eagles Touch. Book one is an enjoyable light read... very romantic. I do wonder though why with all the rivers and lakes that the Indians don't fish! That food source would be available all year around... However, this is fiction, as the tougher the food chain is to get the better the story. I loved Gray Hawks character.
Read more
Report abuse

Valerie Cooper
5.0 out of 5 stars Brilliant!!
Reviewed in the United Kingdom on 30 January 2015
Verified Purchase
This is the first time I have read Karen Kay and I was thrilled with this book.It is a great story both captivating and transporting the reader to another world.The characters were real and totally believable.The story left you wanting to know more about the lives of these people.I can,t wait to read more books by this author.!!!
Read more
Report abuse

Reading Queen
5.0 out of 5 stars An Amazing Read!
Reviewed in the United Kingdom on 2 February 2014
Verified Purchase
This was a beautiful love story between two people from totally different backgrounds who overcome obstacles despite the huge odds stacked against them ever being together. Karen Kay cleverly wraps her stories around the culture of North American Indian tribes with consummate ease. Loved it!
Read more
Report abuse

kathysurridge
5.0 out of 5 stars Five Stars
Reviewed in the United Kingdom on 24 August 2015
Verified Purchase
Waiting for her new books great books
Read more
Report abuse
See all reviews
Back to top
Get to Know Us
Make Money with Us
Let Us Help You
And don't forget:
© 1996-2021, Amazon.com, Inc. or its affiliates