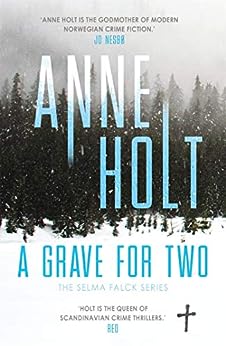 A Grave for Two: Scandinavia’s queen of crime and bestselling author behind the Modus TV series is back! (Selma Falck series) Kindle Edition

Step aside, Stieg Larsson, Holt is the queen of Scandinavian crime thrillers. * Red Magazine * Anne Holt is a thriller writer of the highest order. * Liza Marklund * Lively, unusual and persuasive. Holt writes with the command we have come to expect from the top Scandinavian writers. * The Times * Anne Holt is the godmother of modern Norwegian crime fiction. * Jo Nesbo * --This text refers to the hardcover edition.

Anne Holt is Norway's bestselling female crime writer. She spent two years working for the Oslo Police Department before founding her own law firm and serving as Norway's Minster for Justice between 1996 and 1997. She is published in 30 languages with over 7 million copies of her books sold. --This text refers to the hardcover edition.

4.0 out of 5 stars
4 out of 5
121 global ratings
How are ratings calculated?
To calculate the overall star rating and percentage breakdown by star, we don’t use a simple average. Instead, our system considers things like how recent a review is and if the reviewer bought the item on Amazon. It also analyses reviews to verify trustworthiness.

colin wolverson
2.0 out of 5 stars Disappointing
Reviewed in Australia on 11 May 2020
Verified Purchase
What a disappointment. Loved her other books but this was a shocker. Rambling, overlong, fairly pointless and the story didn't interest me or grab my attention. Shame.
Read more
Helpful
Report abuse

Amazon Customer
2.0 out of 5 stars A Disappointed fan.
Reviewed in Australia on 9 October 2019
Verified Purchase
I am a great fan of this author but this book was disjointed, could not keep track of tje plot/flow. Disappointing.
Read more
Helpful
Report abuse
See all reviews

Lynda Kelly
3.0 out of 5 stars Not Her Best But Not Horrendous
Reviewed in the United Kingdom on 17 July 2019
Verified Purchase
This is the first of a brand new series from Anne Holt. I have always preferred Hanne's series myself and this hasn't changed, although I did warm to Selma, the protagonist in this story. I really liked her friendship with Einar as well. Another relationship I liked was with Hege and Maggi, too. I just struggled with all the skiing stuff.....I don't ski nor have I ever had the hankering to do so and it did go on and on about it. So I found I glazed over a bit at those parts. However, I'm sure the next in the series will be in a totally differing setting so I'll enjoy that much more.
I was shocked to see that Norway also had an influx of Eastern Europeans. I thought they were well clear of all that freedom of movement nonsense over there !! Apparently not....
At one point shorting was written, though I think sporting was meant, I did smile as per usual when Farris got its usual nod. However, we're still getting way too many needless hyphens thrown into her text, such as sub-missive, over-whelmed, some-what, mantel-piece, widow-hood......very off-putting. There were also some misplaced or missed apostrophes.
Not her best by far but I'll still read the next one.
Read more
4 people found this helpful
Report abuse

Maggie SW20
3.0 out of 5 stars Bring back Hanne
Reviewed in the United Kingdom on 19 October 2019
Verified Purchase
I had read many books by Ann Holt, mainly featuring Detective Hanne Wilhelmson, a brilliant, charismatic woman. All marvellous reads.
Selma Falck - a Solicitor with gambling addiction, is nothing like Hanne , sadly. This book crawled along, a story of two young champion Norwegian Cross country skiers accused of taking a ‘banned substance’ Many people are implicated, their names blurred by the numbers. There is very little variety to the pace of this novel, other than wanting to get to the end
Read more
2 people found this helpful
Report abuse

Dr W W M McConnell
5.0 out of 5 stars Another great read from this author.
Reviewed in the United Kingdom on 6 March 2020
Verified Purchase
Complex, interesting and a lot of great characters woven together into a terrific story. Insight into the world of international skiing and its importance in Scandinavian countries.
Read more
Report abuse

Keith
2.0 out of 5 stars Not great.
Reviewed in the United Kingdom on 6 February 2020
Verified Purchase
Not up to her usual standards. Got bored and gave up half way through.
Read more
One person found this helpful
Report abuse
See all reviews
Back to top
Get to Know Us
Make Money with Us
Let Us Help You
And don't forget:
© 1996-2021, Amazon.com, Inc. or its affiliates