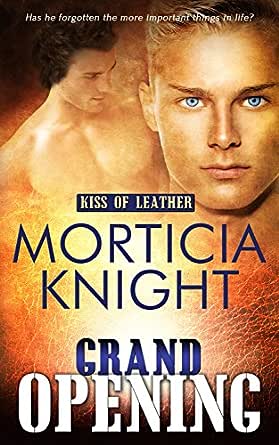 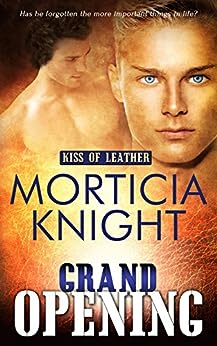 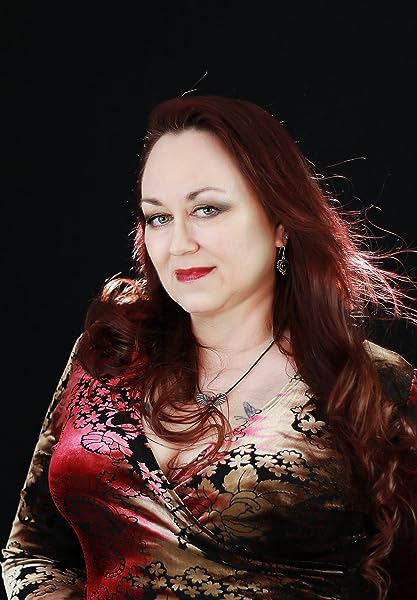 Morticia Knight spends most of her nights writing about men loving men forever after. If there happens to be some friendly bondage or floggings involved, she doesn't begrudge her characters whatever their filthy little heart's desire. Even though she's been crafting her naughty tales for more years than she'd like to share - her adventures as a published author began in 2011. Once upon a time she was the lead singer in an indie rock band that toured the West Coast and charted on U.S. college radio. She currently resides on the northern Oregon coast and when she's not fantasizing about hot men she takes walks along the ocean and annoys the local Karaoke bar patrons. --This text refers to the paperback edition.

Veronica
TOP 500 REVIEWER
4.0 out of 5 stars So good!
Reviewed in Australia on 9 September 2016
I received a free copy of this book to read and review for Wicked Reads.

It was great to be back with the guys from Kiss of Leather. I love that the story doesn't just follow one couple but we get to see what is happening in the lives of all of the couples we've met so far.

I was surprised by the amount of angst I felt reading Grand Opening. The relationship trouble between Josh and David were issues experienced by many couples. My heart went out to David and I kind of wanted to smack Josh.

Will there be more books from the men of Kiss of Leather? I don't know but I sure hope so.

HelenMK69
5.0 out of 5 stars Brilliant
Reviewed in the United Kingdom on 29 April 2017
Verified Purchase
Again another wonderful book by s great writer. You become so invested in these characters and wish that you were with them in their discoveries. Well worth a read.
Read more
Report abuse

Michael Holland
4.0 out of 5 stars Pivotal book of the series
Reviewed in the United States on 23 August 2020
Verified Purchase
The grand opening of the new BDSM club, Kiss of Leather, is just a few days away and everyone is working hard to get everything ready. Unfortunately, one of the three partners, Josh, is so single-minded in his desire to make sure everything is in order for the opening that he’s ignoring his sub David. Even when it’s pointed out to him, he has trouble staying on track, giving David the attention he needs and deserves. Can the two find a way back to what they had, or is being a master no longer something Josh wants?

Relationships that falter or fail because one of the partners becomes so wrapped up in work that they ignore the other must be all too common in the real world, but you rarely see such mundane subjects come up in fiction, especially in D/s stories, where such distractions could be disastrous. Josh and David’s relationship issues are all too believable, and are portrayed in a realistic manner. The problem seems so real that you really wonder if an obsessive personality like Josh really can change enough to get David back and hold onto him.

Like the rest of this series, “Grand Opening” weaves the main story of Josh and David in with the threads of the previous books, so you’ll want to have read the first three installments of the series before tackling this one. This book moves along the over-arching plot of the slave trafficking ring that caught up Corey and Marshall in the last two books, as well as catching us up on the relationship between Marshall and Stone. It also rather emphatically sets up the next book, which features Stone’s assistant and the manager of another club.

Each book in this series so far has been a delightful blend of hot kink and endearing romance. Having a mystery as the connecting plot line definitely makes you want to read the next book as soon as you finish the last (but I won’t). In truth, the whole idea of the club and the world in which these characters exist is a bit of a fantasy, but it’s one you kind of want to believe in.
Read more
One person found this helpful
Report abuse

Kelly
4.0 out of 5 stars Great, great, great!
Reviewed in the United States on 18 October 2016
Verified Purchase
I've read this whole series and absolutely loved every book. This fourth one in the series focuses on the relationship between Josh and David, which was refreshing as neither character appeared very much in the previous books so it was great to see their personalities. This one has much more angst than some of the other books (with the exception of Safe Limits) and I found myself crying over more than one scene. That's what I love about Morticia Knight's books. Not only are they sweet and sexy, but they really tug at your heart strings. I know to have a box of tissues nearby whenever I start one of her books.

I loved David. He was so sweet and sensitive and I really felt for him as he struggled with loving Josh with all his heart, but not getting what he needs from their D/s relationship. Josh has really been neglecting David because of the opening of Kiss of Leather, and David is usually so relaxed and laid back that he doesn't even realize that he's ignoring David's needs so badly. It takes quite a lot for Josh to realize how badly he's messed up, and there was a moment when I despaired of them getting their happily ever after. Of course, I should know better as Morticia Knight is the mistress of happy endings.

JTorleif
4.0 out of 5 stars A little bit of heart break
Reviewed in the United States on 7 September 2016
Verified Purchase
David and Josh have been the foundation that all of the other relationships in this series have looked to as the ideal. I liked that we saw, in this book, that just because a contract has been signed, or a collar has been bestowed, the relationship isn't magically perfect.
Read more
One person found this helpful
Report abuse
See all reviews
Get FREE delivery with Amazon Prime
Prime members enjoy FREE Delivery and exclusive access to movies, TV shows, music, Kindle e-books, Twitch Prime, and more.
> Get Started
Back to top
Get to Know Us
Make Money with Us
Let Us Help You
And don't forget:
© 1996-2020, Amazon.com, Inc. or its affiliates