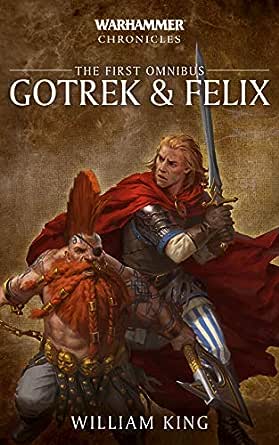 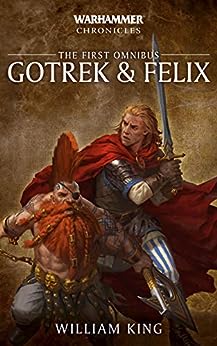 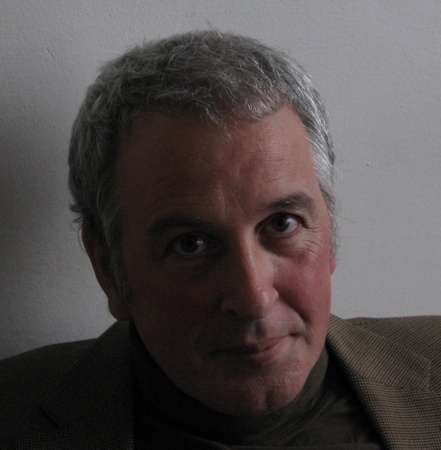 'A vicious sense of pacing and style, and they're just plain fun to read.' - SFF.net

Gotrek and Felix: unsung heroes of the Empire, or nothing more than common thieves and murderers? The truth perhaps lies somewhere inbetween, and depends entirely on who you ask…

Relive the early adventures of the Slayer and his human companion. From the haunted forests of the Empire to the darkness beneath the Worlds Edge Mountains, Gotrek and Felix face demented cultists, sinister goblins and a monstrous troll. In the city of Nuln, they get involved in an invasion by the sewer-dwelling skaven. And in the frozen north, an expedition to the lost dwarf hold of Karag Dum brings Gotrek and Felix face-to-face with a dread Bloodthirster of Chaos…

Read it Because
The saga of Gotrek and Felix starts here, with three novels that introduce a host of fan-favourite characters and feature some of the heroic duo's most memorable adventures.

Coastal Hobbit Reader
3.0 out of 5 stars Warhammer fantasy classic, grim/dark/violent as expected
19 April 2017 - Published on Amazon.com
Verified Purchase
Yes, this is Warhammer and being a fan of the universe, after seeing so many fans rave about this series I had to pick up this collection of the first few volumes.

But it's very formulaic and repetitive, even compared to most stories in the fantasy genre. Every episode goes, "Felix and Gotrek are on a journey. Felix is scared and has regrets about adventuring. Gotrek is tough and mean and obsessed with his doomed Slayer quest. They meet bad guys/monsters who look even tougher and more intimidating, but Gotrek defeats them, with a little help from Felix and possibly some short-lived NPCs, in a massive bloody battle in the end."

So, very little plot except for the violence, which to be fair is a main feature of the Warhammer world in general, but gets mind-numbingly predictable. Entertaining in small doses, but there is so much more potential in the setting for interesting storytelling (or at least there was, before Games Workshop decided sales weren't good enough and blew up the canon with its whole End Times/Age of Sigmar fiasco.)

Pumpkinpoy
3.0 out of 5 stars Generic, but GREAT fun!
18 April 2019 - Published on Amazon.com
Format: PaperbackVerified Purchase
The Gotrek and Felix books are incredibly generic with plot twists that are seen from miles away. However, despite the lack of subtlety and tactfulness of the whole book(s) they still manage to create an amazingly fun journey into the minds of the Dwarf and human. Don't expect master level of stories or substantial character development, but stay for the pure adrenaline rush, fun characters, and wide-scoped journey!
Read more
2 people found this helpful

Poisoned Blade
5.0 out of 5 stars High Fantasy, Action, and Adventure! (Spoiler Free Review)
3 July 2011 - Published on Amazon.com
Verified Purchase
One is on a quest to die, the other is on a quest to help.

Story:
This omnibus contains 13 short stories ranging from 20-60 pages and a full length novel at the end. This Omnibus chronicles the adventures of a pair of warriors as they battle their way through the Warhammer Universe. The stories are in chronological order and the characters gain new gear, experiences, and scars as they battle their way across the World of Warhammer. Gotrek has committed a crime against his people and has been sentenced to die in glorious battle against overwhelming odds. Felix is a fencer and a scholar who accompanies Gotrek and wants to write an epic saga of his death. Together, they rush headlong into danger as they make enemies and allies in a world at war.

World:
All of the stories take place in the Warhammer Universe. The world is a blend between Lord of the Rings and Germany when it was under the rule of the Holy Roman Empire. It's Gritty High Fantasy in a state of perpetual war and turmoil. This book focuses on the Hearty Dwarves, Bloodlusted Orcs, Chaos Spawned Beastmen, and Treacherous Skaven.

Characters:
Despite the fact that Gotrek has committed a serious crime, he is noble and lusts for the battle that will give him a glorious death. Felix owes Gotrek his life and accompanies him on his quest to die. Because Felix has spent so much of his life behind books, the travels across the world are new and exciting to him. The reader experiences Nuln, Kislev, and the Chaos Wastes through the eyes of Felix. In addition to the deadly duo, this omnibus features an array of other heroes and villains. The characters are interesting, funny, entertaining, and you find yourself cheering for them.

Writing Style:
The writing style is fast paced heroic fantasy. But it's not just swords swinging and axes chopping, there's a great deal of humanity in the characters. Settings are majestic, battles are bloody, characters are memorable, and dialogue is entertaining. It's the complete package. If you're looking for some background material on the Warhammer universe, the descriptions of the cities, dungeons, wastes, ruins, and battlefields are inspirational.

Action:
As you may have guessed, this book is loaded with cover to cover action. There are massive battles, skirmishes, assassinations, brawls, duels, more battles, deadly magic, beastmen, armies, ratmen, and even more battles. In the battles, it's not just about who won, you actually feel adrenaline rushes as you read them. Limbs fall, heads roll, blood splatters... Daemonslayer does a fantastic job at describing the horrors of war. Feelings of anxiety, dread, relief, victory, and loss are expertly portrayed through the book.

Maturity: Teens
There are loads of fantasy violence and gore and non-descript sexual situations. (Basically the lights go out and a couple wakes up happy the next morning.)

Overall: 9.5
For $10 you get 13 short stories and a full novel. All of the stories are good and the book gets better as it progresses. This is a GREAT read for Warhammer enthusiasts and fans of high adventure. You'll laugh, cringe, cheer, and learn a great deal about the World of Warhammer.

If you enjoyed this, definitely pick up Robert E. Howard's Conan the Barbarian Stories or the Savage Sword of Conan Comics. You will probably also like the Drizzt books by R.A. Salvatore. And if you like Epic Heroes, definitely pick up Legend by David Gemmell. If you like Fun and Entertaining fantasy, you should read Lankhmar by Fritz Leiber.
Read more
15 people found this helpful

Auburn man in PA
5.0 out of 5 stars I liked it!
12 January 2020 - Published on Amazon.com
Verified Purchase
Really great collection of novels and short stories about Gotrek and Felix and best of all the greatest genius of all time, Thanquol, makes his presence felt. I really wish GW hadn’t destroyed this world to make way for the Age of Sigmar.
Read more

Peter J. Welmerink
5.0 out of 5 stars A new fan to Gotrek & Felix...and you should be too!
2 December 2009 - Published on Amazon.com
Verified Purchase
I have read a lot of good sword-n-sorcery fantasy yarns and novels. I had read GIANTSLAYER (another William King G&F novel) prior to picking up the omnibus and the tales that started it all. I love fantasy because it takes me to places I have never been and if the characters and storytelling is right, is all THERE, I become one with the characters and setting...and THIS BOOK DOES THAT!. It's not just some hack-n-slash story though there is certainly a good amount of blood and gore, but you get to know Felix (as the bulk of the story is written through his eyes) and you care about him and even his grumpy ole companion Trollslayer, Gotrek. I am not going to give away any of the stories but even mashing the first three books together, there was a consistent flow, the action never slowed, things flowed. I couldn't put the book down. The ending was GREAT and kept me on the edge of my seat not sure of how the pair would come out...if they'd survive at all...even though I knew our heroes weren't going to die due to they have plenty of books beyond. King's writing is superb and I can't wait to read the rest of his G&F tales...and yes, even Nathan Long's contributions as he has taken the helm now. For a ten year old book, you can pick this up fairly cheap and it is well worth whatever money you pay.
Read more
3 people found this helpful
Go to Amazon.com to see all 66 reviews 4.6 out of 5 stars
Get FREE delivery with Amazon Prime
Prime members enjoy FREE Delivery and exclusive access to movies, TV shows, music, Kindle e-books, Twitch Prime, and more.
> Get Started
Back to top
Get to Know Us
Make Money with Us
Let Us Help You
And don't forget:
© 1996-2020, Amazon.com, Inc. or its affiliates