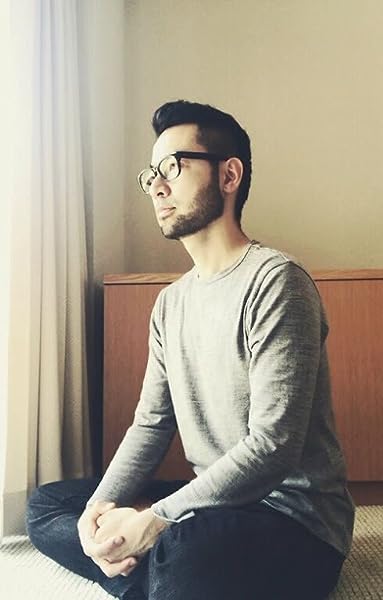 by Fumio Sasaki (Author)
4.6 out of 5 stars 1,508 ratings
See all formats and editions
Sorry, there was a problem loading this page. Try again.

If you've ever felt bogged down by all of the things filling your life up with clutter then this is the book for you.--C.A. "The Daily Want"

In a time of rampant consumerism, a new movement is preaching an alternative path -- one that banishes all but the most fundamental and enriching consumer products from our lives. In Goodbye, Things, Fumio Sasaki recounts his conversion from reckless hoarder to hyper-mindful consumer, and offers advice to those seeking the same simple happiness that he found in minimalism.-- "Gear Patrol"

In his new book, Goodbye, Things, Fumio Sasaki shares the lessons he learned by going minimalist. . . . For Sasaki, minimalism isn't about how little you have, but how it makes you feel. Sasaki credits his minimalist lifestyle with helping him lose weight, become extroverted and proactive, and above all, feel happy and grateful for what he has.--Heeseung Kim "Cosmopolitan"

Inspiring in its straightforwardness and sincerity . . . I don't think it would be possible to read Goodbye, Things without taking a look at your own home (and life) with a new set of eyes. . . . In the end, what matters is the thoughtfulness the book inspires.--Janel Laban "Apartment Therapy"

Makes the case for radical minimalism . . . treat each of [Sasaki's] 70 tips as an opportunity to reevaluate how you use and why you keep the things in your home.--Jenny Xie "Curbed"

Take your spring cleaning to the next level with Goodbye, Things by Fumio Sasaki. A best-seller in Japan, this book uncovers why we want to own more than we need, what this mentality does to our well-being and how we can live better by owning less.--Katie Neal "Parade"

Fumio Sasaki is a Japanese author, editor, and minimalist. He is the former coeditor in chief of Japan's Wani Books, and cofounder of the website Minimal & ism. He currently lives in the Philippines.
Start reading Goodbye, Things: On Minimalist Living on your Kindle in under a minute.

4.6 out of 5 stars
4.6 out of 5
1,508 global ratings
How are ratings calculated?
To calculate the overall star rating and percentage breakdown by star, we don’t use a simple average. Instead, our system considers things like how recent a review is and if the reviewer bought the item on Amazon. It also analyses reviews to verify trustworthiness.

Alessia
5.0 out of 5 stars Worth the read
Reviewed in Australia on 8 June 2017
Verified Purchase
This book changed my mindset for the better. Enjoyable and down to earth book with some really profound messages, adresses not only the practical elements of minimalism but also the psycological.
Read more
2 people found this helpful
Helpful
Report abuse

Joel M
TOP 1000 REVIEWER
5.0 out of 5 stars Great book about an interesting concept
Reviewed in Australia on 16 March 2019
Verified Purchase
Have never thought much about the concept until I came across this book. It's very interesting and a different way to consider living
Read more
Helpful
Report abuse

HKS
5.0 out of 5 stars Fantastic
Reviewed in Australia on 31 December 2017
Verified Purchase
Really enjoyed this book - interesting ideas- I particularly liked the summary of key ideas and principles at the end of the book.
Read more
2 people found this helpful
Helpful
Report abuse

Phillip Mason
5.0 out of 5 stars Highly recommended
Reviewed in Australia on 5 May 2019
Verified Purchase
Good understanding of minimalism and explanation of different ideas and concepts in regards to a minimalistic lifestyle and living simply.
Read more
Helpful
Report abuse

Hande Z
4.0 out of 5 stars Sayonara
Reviewed in the United Kingdom on 28 August 2017
Verified Purchase
Fumio advocates a style of living that is close to that of the ascetic, and is difficult to live as he does – he has only four shirts. He got rid of all his books (all £7,000 worth), CDs, rolls and rolls of developed photographs, and, well, almost everything else he owned. Some people are hoarders by nature and this book will never appeal to them. Some people are neat and minimalist by nature, and this book will not add much other than the pleasure of reading a fine personal account of the life of a minimalist. But there are many in the middle, who at times feel that their lives and living conditions are cluttered. There are people who are on the verge of deciding whether to keep their keeps sakes or throw them away. If they read Fumio, they will go right ahead and chuck their stuff.

Fumio is a minimalist, not so much because he is a Japanese, who are more minimalist than many other societies, but because he was reacting to his ‘overly cluttered pigpen’. As a Japanese, he once was a hoarder! Not anymore, as he tells us his reasoning that we do not need most of the things we possess. A £20,000 will not have fifty times the battery life of a £400 one, and it is probably true that even Bill Gates cannot eat six meals a day, as Fumio says, but the point that the author is making is that not only should we not acquire things, we need not acquire expensive things. That is part of minimalism. It may border on parsimony, but the line is drawn by Fumio – minimalist living includes enjoyment of possessions and experiences. He places experiences above material possessions, but he says we should enjoy the few material possessions that we do have.

Fumio gives plenty of tips as to how to start a minimalist life. But first, one has to rid himself of the greed that pervades the modern world; the psychological attachment to acquisition as a sign of achievement; and the accumulation of things as a measure of self-worth. He tells the reader who is thinking whether to keep a thing or discard, ‘Don’t think. Discard’. He tells us to spend less time shopping.

Fumio is a minimalist indeed, and his philosophy is about living and appreciating life in the present, and happy memories. Yet, it is hard to argue that some objects are desirable because they bring back memories. Fumio seems to think that the memories in themselves are sufficient – this may be a matter of the different extent to which one wishes to be a minimalist. Don’t forget, Fumio got rid of all his towels, and now only has a Japanese towel that he uses for everything – bathing and washing his dishes included.
Read more
107 people found this helpful
Report abuse

Robert Blunden
5.0 out of 5 stars Superb Book
Reviewed in the United Kingdom on 6 September 2017
Verified Purchase
It is not often that I read a book twice in the first week. I have read a couple of books before about getting rid of 'clutter' which were ok but I somehow felt like their authors lived very different lives to mine. But this book is very different. Sure, most readers will think this guy has gone to extremes, but don't let that put you off. What really impresses me about the author is that he says more about his own life and how he has found meaning and some kind of happiness the further along the minimalist path he goes. There is so much about his own life in this book. It is very inspiring and I salute Fumio Sasaki's bravery in telling us what he does. So this is not just another book from the East that talks about living in a tidy home and getting your stuff organised. That's only a part of something bigger. I recommend this book 100% to anyone who feels their life is empty even when their home is full and their days seem very full and busy.
I have just read Ken Mogi's book entitled The Little Book of Ikigai. So very disappointing. Maybe it needs reading more than once but it fails to deliver. Please read Goodbye Things. You do not have to throw away things you love. You embrace the message your way. I don't think you will be disappointed. If nothing else, it will get you thinking about the things in your life and what matters.
Read more
67 people found this helpful
Report abuse

joe
3.0 out of 5 stars Three Stars
Reviewed in the United Kingdom on 4 March 2018
Verified Purchase
you probably should get it on kindle if you want to get into the spirit of it.
Read more
60 people found this helpful
Report abuse

Moo
4.0 out of 5 stars Maximise your maximalist-guilt (and perhaps get rid of a thing or two)
Reviewed in the United Kingdom on 12 August 2018
Verified Purchase
Whilst I’m not sure of the logic of buying a thing entitled Goodbye Things, I agree wholeheartedly with the sentiments expressed inside this book. I only wish I could live up to Fumio’s example. I did manage to chuck out a few odd and sods, and I now have a fairly large pile of stuff to eBay (if that’s a verb), but one year on from reading the book I’m still living in a whole heap of clutter that, I fear, will be making me feel maximalist-guilt for some considerable time to come. Nevertheless it’s an entertaining read and shows what’s possible. Problem best to buy the Kindle version or borrow a friend’s copy though.
Read more
20 people found this helpful
Report abuse

Anon
5.0 out of 5 stars Gentle Zen
Reviewed in the United Kingdom on 6 March 2018
Verified Purchase
This gentle, thought-provoking book is more than just a guide to decluttering your home. It's full of insights into how minimalism can transform the way we see ourselves, how we wish to present ourselves to the world and how we strive to attain happiness. Sasaki's writings offer a simple and practical application of the Zen Buddhist teaching of non-attachment. This book was a joy to read and I hope Sasaki one day writes another.
Read more
23 people found this helpful
Report abuse
See all reviews
Back to top
Get to Know Us
Make Money with Us
Let Us Help You
And don't forget:
© 1996-2021, Amazon.com, Inc. or its affiliates