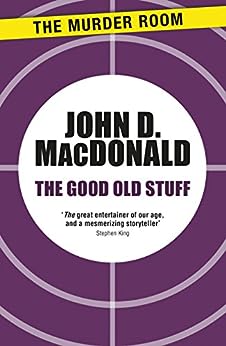 'The great entertainer of our age and a mesmerizing storyteller' Stephen King --This text refers to an out of print or unavailable edition of this title.

John D. MacDonald was born in Pennsylvania and married Dorothy Prentiss in 1937, graduating from Syracuse University the following year and receiving an MBA from Harvard in 1939. It was Dorothy who was responsible for the publication of his first work, when she submitted a short story that he had sent home while on military service. It was initially rejected by Esquire but went on to be published by Story magazine - and so began MacDonald's writing career. One of the best-loved and most successful of all the masters of hard-boiled crime and suspense, John D. Macdonald was producing brilliant fiction long after many of his contemporaries had been forgotten, and is still highly regarded today. THE EXECUTIONERS, possibly the best known of his non-series novels, was filmed as Cape Fear in 1962 and 1991, but many of the crime thrillers he produced between 1953 and 1964 are considered masterpieces, and he drew praise from such literary greats as Kurt Vonnegut and Stephen King, who declared him to be 'the great entertainer of our age, and a mesmerizing storyteller'. His novels are often set in his adopted home of Florida, including those featuring his famous series character Travis McGee, which appeared between 1964 and 1985. He served as president of the Mystery Writers of America and in 1972 was elected a Grand Master, an honour granted only to the greatest crime writers of their generation, including Ross MacDonald, John Le Carré and P. D. James. He won many awards throughout his long career, and was the only mystery writer ever to win the National Book Award, for THE GREEN RIPPER. --This text refers to an out of print or unavailable edition of this title.

Kindle Customer
4.0 out of 5 stars really is good old stuff
Reviewed in the United Kingdom on 5 March 2015
Verified Purchase
Brilliant writing. May have been written years ago but still a great read.
Read more
One person found this helpful
Report abuse

Bob Priddy
5.0 out of 5 stars reclaiming a great mystery writer
Reviewed in the United States on 7 June 2019
Verified Purchase
John D. McDonald has not been on bookstore shelves for many years----a shame because he was a great storyteller. This book and its sequel, More Good Old Stuff, capture 27 of the short stories he wrote for various mystery/detective magazines from the 30s into the 70s. It's a pleasure to read his good old stuff and I recommend any other fans of good mystery writing to become reacquainted with him.
Read more
2 people found this helpful
Report abuse

Jeff Ferrier
5.0 out of 5 stars Five Stars
Reviewed in the United States on 25 June 2016
Verified Purchase
An excellent book on the post-WW 2 era!
Read more
Report abuse
See all reviews
Back to top
Get to Know Us
Make Money with Us
Let Us Help You
And don't forget:
© 1996-2021, Amazon.com, Inc. or its affiliates