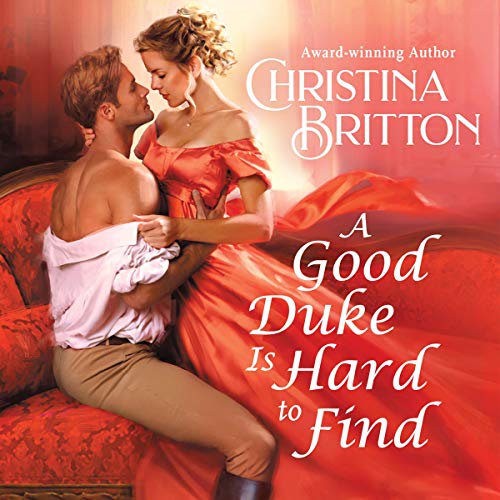 A Good Duke Is Hard to Find

Get swept away by a Regency romance of broken engagements, second chances, and stolen kisses from the author whom Publishers Weekly calls "irresistible".

After her third fiancé leaves her at the altar, Lenora Hartley is beginning to think she's cursed. One thing's for certain: She needs to escape London and her father's tyrannical attempts to find her yet another suitor. The Isle of Synne, an isolated and idyllic retreat off Britain's northern coast, is blessedly far from society's gossip, but it also carries haunting reminders of her first fiancé. Letting go of the past to find happiness seems impossible - until Lenora is thrown in the path of a gruff, mysterious blue-eyed man who makes her pulse race.

Next in line for a dukedom he doesn't want to inherit, Peter Ashford is only on the isle to exact revenge on the man who is responsible for his mother's death. Once he's completed the task, he'll return to America where his life can finally be his own. Yet when he meets the beautiful and kind Miss Hartley, he can't help but be drawn to her. Can Peter put aside his plans for vengeance for the woman who has come to mean everything to him?

Switch between reading the Kindle book & listening to the Audible narration with Whispersync for Voice.
Get the Audible audiobook for the reduced price of $39.71 after you buy the Kindle book.
Learn more about membership
By completing your purchase, you agree to Audible’s Conditions Of Use and Privacy Notice.
Sold and delivered by Audible, an Amazon company
Share

Raymond Thompson
4.0 out of 5 stars lessons to learn
Reviewed in Canada on 21 March 2021
Verified Purchase
First in the Isle of Synne series. After being abandoned by three fiancés in three years, Miss Lenora Hartley seeks refuge from cruel gossip among friends on the Isle of Synne. There she meets Peter Ashford, heir to the dukedom of Dane. There is an immediate attraction between the two, but there are obstacles to a happy ending. Both have to grow: she must conquer her fears, not only of another betrayal, but of her controlling father; he must learn to place love ahead to hatred.
This romance offers valuable life lessons, but the agonizing doubts and indecision that plague the conflicted protagonists do drag on at length.
Read more
Report abuse

Pat. H
3.0 out of 5 stars Too much pain and heartbreak for me.
Reviewed in the United States on 7 September 2020
Verified Purchase
I wanted to like this book. The plot sounded good but the hero is so rough and tumble it is hard for me to imagine a gently bred English lady falling in love with him. The heroines father is beyond awful, selling her to men who have a debt with him. No wonder they don't show up for the wedding! Maybe it is the extremes that make the characters hard to root for. The heroine is only pure goodness; the hero is tough, quick to anger, uncouth, has no manners, full of hatred and only interested in seeking revenge for the uncaring attitude of his wealthy relations who denied him help when his mother was dying many years ago. And it is repeated many times he had calluses on his hands. I guess that shows he was an unrefined working man and therefore an unlikely person to be the heir of a duke. I don't like reading a book where things are repeated over and over like the reader didn't get it the first time. For instance, I only needed to be told once that the heroine did not love her first fiance and felt her rejection of him caused his death. Once would have been enough to say the hero felt guilty over his mother's death. I got it the first time that he planned to ruin the duke's family's future and the people that made their living from his estate. I won't bore you with more, I'm sure you get the picture. The story was almost a tragedy and I felt battered and bruised before they finally got to their happy ever after.
If you like stories of star crossed lovers that go through lots of hardship before finally maturing enough to admit they love each other you will love this book. I didn't.
Read more
12 people found this helpful
Report abuse

Melanie Valente
4.0 out of 5 stars A great opposites attract romance
Reviewed in the United States on 29 July 2020
Verified Purchase
A Good Duke is Hard to Find features a wonderful romance between a woman cursed in love and a duke’s heir out for revenge.

After being jilted by her third fiancé, Lenora Hartley decides to take a break from London and her father’s attempts to find her another match. The Isle of Synne, an isolated island off Britain’s northern coast, is exactly the right place to avoid the gossip. But soon after arriving, she runs into a mysterious man who attracts her far more than she expected. Peter Ashford is set to inherit a dukedom he doesn’t want, but his only thoughts are of getting revenge on the man who let his mother die. Determined to ruin the man and his legacy, he heads to the Isle of Synne to set his revenge in motion. But once there, he meets Miss Hartley who has him questioning all of his plans.

Lenora was an intriguing character and one I was interested to learn more about after seeing she had three failed engagements. It quickly becomes clear Lenora’s father plans to use a marriage to Lenora to further his own political career and Lenora has had very little input on her betrothals. It was easy to feel for Lenora in her situation and I think my one complaint about her character was how long it took for her to stand up for herself. Peter left England thirteen years ago after the death of his mother and it is only his own sense of debt to the woman who helped his mother that has him returning now. Peter’s situation as a child was heartbreaking and it definitely made it easier to understand why he was so intent on revenge.

Lenora and Peter’s relationship was very much an opposites attract romance with the added bit of forced proximity due to the small isle they’re on. Peter is definitely a pessimistic person compared to Lenora, but as a fan of the grumpy-sunshine trope, that worked for me. Both Lenora and Peter have issues opening up to others which meant it took a while for their romance to progress. Plus, with Lenora’s father arranging another betrothal for her, she knows she’s not entirely free to follow her heart and Peter’s quest for revenge means he has no plans to marry. My one issue with their romance was how long it took for both of them to admit that their relationship was something they wanted. They definitely admitted their attraction to each other right away, but it took much longer for them to admit they wanted more.

Overall A Good Duke is Hard to Find was a very enjoyable read and I will definitely be picking up the second book in the series, Someday My Duke Will Come, when it releases next year.
Read more
2 people found this helpful
Report abuse

Reading in Morgan Hill
5.0 out of 5 stars Love triumphs over revenge
Reviewed in the United States on 12 January 2021
Verified Purchase
I purchased this book in August 2020, and didn't read it until the 2020 Christmas Holidays! I shouldn't have waited!! What a great read!

When she is literally walking down the aisle, Lenora Hartley learns her Fiancé has not shown up, and in fact has run off. After three unlucky engagements, Lenora thinks she is unlovable and with her best friend, escapes to the Isle of Synne to stay with her friend's grandmother. She has spent much time there and in fact, her first Fiancé was from that location. Now she is licking her wounds and trying to forget that her father is still looking for a suitable bridegroom.

Peter Ashford has returned from America, to the Isle of Synne to destroy the Dukedom he is soon to inherit. He places the fault for his mother's death on the current Duke, his uncle, and wants nothing to do with keeping the Dukedom intact and profitable. He wants to run the place into the ground and wants his ailing uncle to know he will do it. Sworn to never marry and exact revenge on his uncle, his gracelessness and horrible manners indicate he will do what he wants when he wants!

But then, love. Not right away, and not when you'd expect it. Lenora is all things good. Peter is a boor with a chip on his shoulder. The machinations of Lenora's honorary grandmother are epic! Credit to an Old Crone and her little dog to move romance along.

Opposites attract and love can mend hearts. Kindness triumphs over vindictiveness. What a great read. I recommend this book.

This is the first book by Christina Britton I've read. It won't be the last!
Read more
One person found this helpful
Report abuse
See all reviews
Back to top
Get to Know Us
Make Money with Us
Let Us Help You
And don't forget:
© 1996-2022, Amazon.com, Inc. or its affiliates