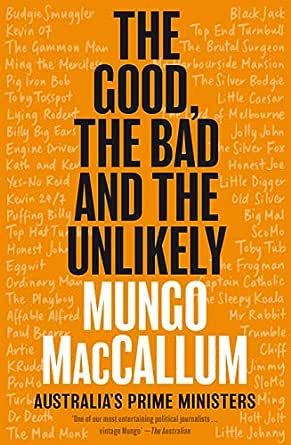 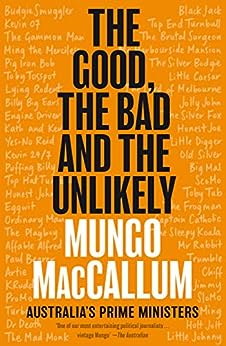 The Good, the Bad and the Unlikely: Australia's Prime Ministers Kindle Edition

Mungo MacCallum is the author of The Good, the Bad and the Unlikely: Australia's Prime Ministers. He has long been one of Australia's most influential and entertaining political journalists, in a career spanning more than four decades. --This text refers to the paperback edition.

Since Australia's birth in 1901, twenty-nine politicians have run the national show. Whether their term was eight days or eighteen years, each Prime Minister has a story worth sharing. --This text refers to an alternate kindle_edition edition.

3.8 out of 5 stars
3.8 out of 5
61 global ratings
How are ratings calculated?
To calculate the overall star rating and percentage breakdown by star, we don’t use a simple average. Instead, our system considers things like how recent a review is and if the reviewer bought the item on Amazon. It also analyses reviews to verify trustworthiness.

Max Fehring
4.0 out of 5 stars I thoroughly enjoyed to gain an understanding of all of our prime ...
Reviewed in Australia on 21 February 2016
Verified Purchase
I thoroughly enjoyed to gain an understanding of all of our prime ministers. The one thing that came out for the whole the book is just our they very much like us all with strengths and weaknesses in various aspects of their life. Is no doubt much has changed since our early prime ministers such as Barton were given the Honoured role to lead the nation of Australia.Power of communication in all its forms these days, has changed the way in which prime ministers and those aspiring to be promises relate to the people. Communication gives us an up-to-date of what's going on but is also removes Political leaders more away from the people in a personal manner. They just don't send to get space to do some common sense thinking and spin is a real problem. I thought Mungo did a reasonably good job being balanced, perhaps somewhere thet challenge for all writers to indicate what their political leanings are, so one can take that into account when they are reading a book on making judgements for themselves
Read more
Helpful
Comment Report abuse

Liam
4.0 out of 5 stars Decent Read
Reviewed in Australia on 18 October 2015
Verified Purchase
The book is a fairly decent account of all the prime ministers from federation up to recent times (Abbot). The book in all gave a good amount of information regarding the prime ministers and how they all came about power. I would of given the book a 5 stars if it had explained in more detail the policy's and legislation that the prime ministers and their governments had implemented and what effect they had on Aussies. 4/5
Read more
One person found this helpful
Helpful
Comment Report abuse

Mungo MacCallum has given us an excellent level view of our past and present leaders.
Read more
Helpful
Comment Report abuse

Sydney1981
TOP 1000 REVIEWER
2.0 out of 5 stars Too brief - a disappointment
Reviewed in Australia on 22 July 2017
Verified Purchase
A VERY brief overview of the figures who took upon the Prime Ministership of Australia - however the book lacks so much depth, that a quick glance of Wikipedia would offer more detail and analysis.
Read more
Helpful
Comment Report abuse

J. R. Bennett
1.0 out of 5 stars Not even a smile was raised
Reviewed in Australia on 5 August 2019
Verified Purchase
Give this one a wide berth. Although supposedly a humorous insight into Australian Prime Ministers it failed to be either informative or funny.
Read more
Helpful
Comment Report abuse

Genevieve
3.0 out of 5 stars Easy reading style but biased
Reviewed in Australia on 26 November 2017
Verified Purchase
Whilst the historical context is well presented the book is loaded with the opinions of the author. The bias in these opinions is obvious - the Labor PMs are all heroes and the Liberal PMs are all ho hum.
Read more
One person found this helpful
Helpful
Comment Report abuse

Martina A. Nicolls
4.0 out of 5 stars Quick reference book
Reviewed in the United States on 12 September 2019
Verified Purchase
This is about Australia’s 29 Prime Ministers from 1901 to 2018, covering their background, aspirations, and life in office—whether it was for eight days or 19 years.

There are 28 men and one woman—Julia Gillard. Julia Eileen Gillard, Australia’s 27th Prime Minister, from 2010 to 2013, was the country’s first unmarried leader, and first woman PM, noted for her speech condemning misogyny.

Unlike in many countries, in Australia there is no requirement to be born in Australia to serve in the top position in the land. Hence, there are 22 Prime Ministers born in Austalia and seven born overseas—with six from the United Kingdom and one from Chile. John Christian Watson, the third Prime Minister—for four months in 1904—was born in Chile and raised in New Zealand. Although his premiership was short, he led the world’s first Labor government.

The biographies are brief, mentioning their background and characteristics—positive and negative—their lives, legacies, and popularity (or not). Nothing is elaborated upon in any detail, and even the dates of their leadership is hidden in the narratives. A detailed list of dates would be welcome.

Nevertheless there are some points of interest, and its easy to dip in and out of chapters.

Harold Edward Holt (1966-1967), a month after his inauguration, celebrated the currency change from pounds, shillings, and pence to dollars and cents on 14 February 1966. He died in office after a taking a morning swim on 17 December 1967 at Cheviot Beach. He disappeared and his body was never found, sparking theories of drowning, shark attack, and conspiracy theories.

Edward Gough Whitlam (1972-1975) was ‘large and legendary’ representing the future, but he was unseated in a vote of no-confidence, and on 11 November 1975 the Governor-General Sir John Kerr (the Queen’s representative) sacked him.
Robert ‘Bob’ James Lee Hawke (1983-1991) recorded the highest popularity rating ever measured by an opinion poll for his ‘career based on camaraderie … and sheer luck.’ Paul John Keating (1991-1996) had ‘electrifying performance skills … a natural talent for economics’ and an eye for the ‘big picture.’ He is the only Prime Minister with a hit musical show about him.

It’s not bad for a quick reference book, and there is an accompanying photograph with each leader. But some snapshot facts and figures would add to the information and interest.
Read more
Report abuse

zach
5.0 out of 5 stars Nice introduction to Australian political history/PMs
Reviewed in the United States on 23 March 2019
Verified Purchase
Nice introduction to Australian political history/PMs for those who want a little bit more in-depth background -- but still a relatively easy read. Includes interesting insight by the author, and fun anecdotes. I would only suggest an intro page including a timeline of the leaders, time in office, and political parties. I found myself having to Google as I read.
Read more
Report abuse

Amazon Customer
5.0 out of 5 stars 27 reasons to know Australia's past Prime Ministers
Reviewed in the United States on 10 March 2014
Verified Purchase
Mungo MacCallum has written a very readable and enjoyable account of Australia's past prime ministers. I very much enjoyed his account of the early PM's and the fact that during the first 15 years Australia was beset with regular changes in leader as members of Parliament changed sides more often that they changed their underwear. As Churchill was reported to say if you have ratted on your party you might as well re rat.
Mungo's account of the more recent PM's is restrained but deals with their backgrounds succinctly.
Read more
One person found this helpful
Report abuse

Denis J. Kirkaldy
4.0 out of 5 stars easy primer to Australian government
Reviewed in the United States on 17 July 2012
Verified Purchase
This book I read with great interest but soem frustration. On the early Prime Ministers there was a wealth of material that was new to me and gave me a new understanding of who they were and what they achieved. On the later ones there seemed very little that was useful. I wanted more from a Canberra veteran commentator.

Mongo writes well and is easy to read. I just felt he could have done better - and I wish he had.
Read more
Report abuse

Amazon Customer
4.0 out of 5 stars Great read
Reviewed in the United States on 6 October 2018
Verified Purchase
Think this book gives a brief but useful insight into the various PM we have had. All gave value to the position in their own way. Those who aren't swinging/independent voters will find disappointment because they will learn of issues they didn't wish to know or confront in their leaders.
Read more
Report abuse
See all reviews
Get FREE delivery with Amazon Prime
Prime members enjoy FREE Delivery and exclusive access to movies, TV shows, music, Kindle e-books, Twitch Prime, and more.
> Get Started
Back to top
Get to Know Us
Make Money with Us
Let Us Help You
And don't forget:
© 1996-2020, Amazon.com, Inc. or its affiliates