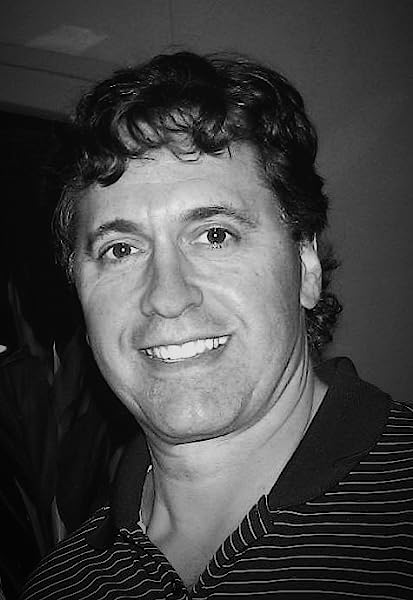 Steve Alten is the best-selling author of the MEG series - which was the basis for the feature film The Meg, starring Jason Statham - The Domain Trilogy, and standalone supernatural thrillers such as The Omega Project and Goliath. A native of Philadelphia, he earned a Bachelor's degree from Penn State, a Masters from the University of Delaware, and a Doctorate from Temple University. He is the founder and director of Adopt-An-Author, a free nationwide teen reading program used in thousands of secondary school classrooms across the country to excite reluctant readers.

Mr. M. Hawkins
4.0 out of 5 stars enjoyable, AI goes wild
Reviewed in the United Kingdom on 16 July 2012
Verified Purchase
I enjoyed this book, it had just the right balance between technical jargon and a good story line. All set around computer AI going a bit mad (and in this case, very vicious) like skynet in the terminator.
Good book, recommended

Kindle Customer: LeaAdele
5.0 out of 5 stars Horrifyingly amazing!
Reviewed in the United States on 8 April 2019
Verified Purchase
AI is here, maybe not as advanced as Sorceress, but then it could be even further along then that. The question that remains in my mind is this: Is the Genie, already out of the jar? Does anyone have the answer to my question? I would like the answer in my lifetime. However, since my lifetime is almost complete (I am 77 years, born August 31, 1941, just months before Pearl Harbour was attacked, it is unlikely I will get my answer during this lifetime) So, I will leave the search for answers to my four GrandDaughters. All four are filled with curiousity, and the desire to know all that can be known. Each chose their path toward knowledge and enlightenment at a very early age. They each have stayed true to the paths they set for themselves. Emma, the youngest is now 12. She stopped her parents while boarding a plane in New York City to return home to San Antonio, after vacationing in "The Big Apple", attending her 1st Broadway Play. She was 4 yrs old. Totally, involved in the young actresses performance on stage. She did not move or speak. so involved in what was happening on stage. Boarding their plane to return home, she stopped in the middle of the aisle, turned to her Mother, and said when we get home you must find me an excellent dance teacher, I can teach my self to sing, and to learn scripts, but I will need help learning to dance. So you must find me a good teacher to teach me dance. Then she turned back around and continued on to her seat. She had made her decision, chosen her life's path. She could not wait to begin her journey. She will made her dream happen. She has been in many local plays since then. Her GrandDad and Mimi (that's me) plan to be in the audience the night she opens on Broadway. Her big sister Tabitha has wanted to be a Veternarian as long as I can remember. She has a way with all animals. She has many talents. Anyone of which she could turn into her career. At 11 yrs. She auditioned for the 'Youth Symphony of San Antonio'. Her mother received a letter from the director stating they normally don't take young muscians into the program until they are 13 or 14 and in High School, but they had decided to make an exception in her case. She was one of the finest young muscians he had had the pleasure to hear in some time. By the time she was 14 she went on an 8 concert trip to Italy. They gave performances in 6 cities and the Bacillica in the Vatican. The Pope attended that concert. She was so excited to see the Pope. We are Presbyterian, not Catholics. But she recognized what an Honor it was for him to be there and speak to them. She still wanted to be a Vet. That had not changed. The next spring, her Sophmore year, she was chosen to finish her spring Science project in Costa Rico's RainForest. She would be a guest of the University of Costa Rico. They would be supervising the completion of her Science project. She slept in a hammack in the trees in the Rain Forest. She was given mosquito netting to wrap up inside while sleeping. She did not use it. The instructors usually found her asleep with RainForest animals in the hammack with her. I learned early on with her not to ask what kind I was truly better off not knowing. After that trip we learned just how serious her allergies to certain animals were. When she got off the plane in San Antonio, Her mother was shocked. It was 2 weeks before Prom and there was not a place on Tabby's face, arms, and legs that was not covered y angry red sores & bites from bugs, or an allergy rash. Our daughter took Tabby straight to her Dermatology Doctor. She worked a minor miracle and had Tabby's skin mostly cleared up within 12 days. What was still left she used perscrption makeup to cover the night of the prom. Unless you knew where to look you could not tell where the places had been. Our oldest grandDaughter finished HS in 3 years, and received her undergraduate degree from Texas A & M, in 3 years. She was editor of the A & M University newspaper all three years. The only paid position on the paper. She wanted to write fiction and screen plays for her stories. She decided to go straight through her graduate program, too. Since her younger sister was 3 years behind her, she knew her parents could not afford to pay for 2 students in university at the same time. Rhiannon said she would pay her own expenses. She got a Teaching Assistantship that paid for her tuition and her text books. But then she had to figure out a way to pay for room and board. Raven was attending a Junior college her first 2 years then she was transfering to Sam Houston University in Huntsville, Texas. That was where her sister was attending Graduate School. They decided to share an apartment. Halfing the costs would help them both cut costs the next year. The rest of us wondered how long it would last before one of the sisters decided to move out. They surprised us and worked it out.
Read more
Report abuse

Kara J. Jorges
3.0 out of 5 stars TechnoMonster Thriller
Reviewed in the United States on 1 May 2007
Verified Purchase
Gunnar Wolfe was a career soldier until a mission wherein the soldiers he was supposed to kill were children had him rethinking his entire life. When he destroyed the schematics for the most advanced attack submarine in the world, and got set up to appear to have sold them to the Chinese, he was sentenced to 10 years in Leavenworth. When he's released early, he retires to his father's farm in Ohio, thinking he might drink himself to death. His ex-fiancee, Rocky Jackson, daughter of General "Bear" Jackson, is military to the bone. She and Gunnar had been designing the Goliath sub together before Gunnar's fall from grace, and she is now serving active duty on an aircraft carrier with her new husband. Gunnar and Rocky are thrown back together when Simon Covah, the man who set Gunnar up to go to prison, sinks an entire American battle group in the Atlantic, killing 8,000 soldiers, Rocky's husband among them. It's suddenly obvious someone has built Goliath.

The sub Rocky and Gunnar had designed resembles a giant stingray, and on board are several computer-operated mini attack subs that resemble hammerhead sharks. The Goliath itself is run by an AI computer called Sorceress. Sorceress is programmed to learn, which proves to be dangerous, as it is in charge of a heavily armed stealth sub. While Simon Covah wreaks havoc all over the world, Rocky and Gunnar devise a plan to get themselves on board the Goliath so they can destroy it. Their plans go awry, however, and soon they are playing a cat and mouse game against not only Simon Covah, but his out-of-control computer which may wipe out the entire human race.

While not nearly as much fun as Alten's "Meg" novels, this one has its merits. Though it spent a bit much time with military brass and political figures, it was a good story that hasn't yet been done to death. Its flawed heroes wrestle with morality while trying to outthink the most advanced computer in the world, all while being tracked by an American sub and her hardy crew. Their mission is to save humanity and destroy Sorceress, but the computer won't give up so easily. Though not my favorite Alten, it was nonetheless a pretty decent thriller with a very cold and scary villain.
Read more
One person found this helpful
Report abuse

King
3.0 out of 5 stars A MODERN FRANKENSTEIN STORY
Reviewed in the United States on 31 August 2009
Verified Purchase
Goliath, by Steve Alton is a pure science fiction novel. A huge submarine with a biological brain literally takes on the entire world. Bigger, faster, stealthier and more deadly than any submarine in history, the Goliath has no trouble executing its evil agenda, which, of course, it to kill everybody.

The skipper of the Goliath is a brilliant terrorist who has a major ax to grind from his past, so he sets out to bring an end to worldwide violence. So far so good, but then a lightning bolt strikes Goliath sending a charge of electricity throughout the entire boat and, its biological brain, called Sorceress, becomes self aware. Sound a little like Frankenstein? You got it. Then, after several pages of who am I? And what am I doing here? Sorceress assumes sole command of Goliath and the terrorist's agenda to set the world free from violence becomes Sorceress's agenda to rid the planet of Homo sapiens.

In my opinion, Goliath is not what I'd call a cliffhanger, but, as a science fiction story this book is as good as any. The story is interesting and the author provides just enough technical detail to keep the high-tech reader interested and turning the pages. Overall I give it a "good" recommendation.
Read more
Report abuse
See all reviews
Back to top
Get to Know Us
Make Money with Us
Let Us Help You
And don't forget:
© 1996-2021, Amazon.com, Inc. or its affiliates