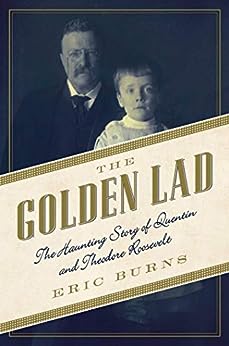 "Piercing the larger-than-life Teddy Roosevelt myth, Burns (1920), a former correspondent for NBC News and Today, explores the personal side of the energetic, rambunctious war hero and politician and his doting relationship with his youngest child, Quentin. Burns’s unique, stirring account of America’s most colorful president allows Teddy Roosevelt, the man and father, to step off the page." ― Publishers Weekly

"Fresh and illuminating, a fast-paced read that focuses on President Roosevelt’s private life and his role as a husband and father, and on a young man inspired by the Rough Rider to fight and die for his country. The kind of biography that more authors should embrace: concise and lively." ― Washington Post

"Burns tells the story of parallel lives. The Golden Lad is not a conventional White House biography. Burns offers a sharp picture of a still-iconic figure. A close and often painful family portrait." ― The Wall Street Journal

"Burns calls his account of the special relationship between the president and his favorite child a haunting one, but it is so many other things as well: heartwarming and heartbreaking, joyful exuberance ending with the kind of death in combat so celebrated and sought by TR for himself but unendurable in his Golden Lad." ― Washington Times

"A crisply written profile. A father-son focus reveals much about the multifaceted Theodore’s personality. General readers seeking a naturally sympathetic, full-length portrait, will appreciate this work." ― Library Journal --This text refers to an alternate kindle_edition edition.

Eric Burns, a former NBC News correspondent and Today Show pundit, appears regularly as a commentator for Entertainment Tonight and hosts A&E's Arts & Entertainment Revue. He was the former host of Fox News Watch and has won an Emmy for media criticism. He is the author of Infamous Scribblers and The Spirits of America and lives in Westport, Connecticut. --This text refers to an alternate kindle_edition edition.

Gerald Cluff
2.0 out of 5 stars Two Stars
Reviewed in Canada on 7 April 2017
Verified Purchase
The author seems to hate Theodore Roosevelt, why did he bother ?
Read more
Report abuse

Michael C Gallo
3.0 out of 5 stars Needs A Few Corrections
Reviewed in the United States on 6 April 2016
Verified Purchase
I won't belabor the point that others have made: the fact-checking is lacking. There are more errors than those recounted in the above reviews, such as stating that the well-known photo of TR and Elliot watching Lincoln's funeral procession from their grandfather's window might be TR and Edith; other mistakes of names and relationship and the like. The glaring errors of the carriage accident being in DC and the Medal of Honor given by Wilson are what stymied me, however - the decent bibliography should have produced research that never would have come up with these errors in the first place.(It's understandable mistaking "Ethel" and "Edith", even though that should have been checked; how on earth would Mr. Burns have come up with the idea that Wilson awarded TR the Medal of Honor unless he just made it up out of whole cloth?) Other than that the book is a fairly enjoyable, quick read and despite much Roosevelt research I learned some things I did not know, even after reading Bishop's book on Quentin Roosevelt and Flora Whitney, which covered much of the same ground. But it's hard to get past the fact these errors exist and it makes me wonder how serious Mr. Burns was in tackling this topic.
Read more
12 people found this helpful
Report abuse

Stephen K. Trynosky
4.0 out of 5 stars She loved it. To her it was a "family" story ...
Reviewed in the United States on 8 June 2017
Verified Purchase
First of all, when the book arrived, I opened the package and left it on the table where it disappeared. A few days later I caught my wife reading it in bed. My wife "tolerates" my obsession with history and biography but is a fan of neither. She became engrossed with the book and finished it in a few nights. She loved it. To her it was a "family" story full of all the elements of a good melodrama and ended for her with a tear or two and a whole lot of questions to me about "Teddy". Think we will do Sagamore Hiill this summer. Unfortunately, in the interim I've started two other books and will not get to it for a while. But, if Mrs. Trynosky liked it and recommended the story to her friends. It is a sure fire winner.
Read more
One person found this helpful
Report abuse

Robert C. Cochran
5.0 out of 5 stars A father's love.
Reviewed in the United States on 1 April 2017
Verified Purchase
Heartwrenching very seldom told story of the one and only thing that could break the great mans spirit and health! The ending was one of the saddest I've ever read. This book is a must read for all T.R. fans.
Read more
Report abuse

Lawrence A. Rand
2.0 out of 5 stars On a Grade Level, a Generous "C"
Reviewed in the United States on 30 March 2016
Verified Purchase
I bought this book after reading a glowing review in the FT (or perhaps the WSJ). Having read many TR books, I was looking forward to exploring the relationship between Theodore and Quentin. The read was pedestrian at best, and as an historical treatise, very weak. The writing itself was equally disappointing...No McCullough or Morris here. As a trained historian and economist (as well as a college professor) this work would get a "gentleman's C with charity." On a scale of 1-10, the quality of research is C- and as for the writing, a generous C. Next time I will read the reviews in the NYT as more accurate.
Read more
6 people found this helpful
Report abuse
See all reviews
Back to top
Get to Know Us
Make Money with Us
Let Us Help You
And don't forget:
© 1996-2021, Amazon.com, Inc. or its affiliates