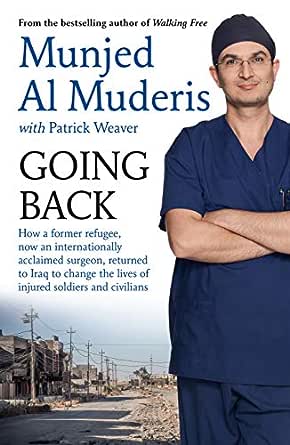 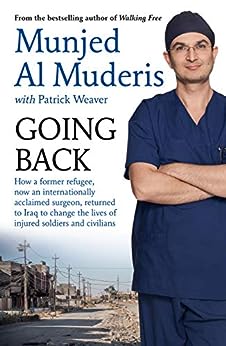 Going Back: How a former refugee, now an internationally acclaimed surgeon, returned to Iraq to change the lives of injured soldiers and civilians Kindle Edition

In Munjed Al Muderis's bestselling memoir Walking Free, he described his experience as a refugee fleeing Saddam Hussein's Iraq, his terrifying sea journey to Australia and the brutal mandatory detention he faced in the remote north of Western Australia. The book also detailed his early work as a pioneering orthopaedic surgeon at the cutting edge of world medicine.

In Going Back, Munjed shares the extraordinary journey that his life-changing new surgical technique has taken him on. Through osseointegration, he implants titanium rods into the human skeleton and attaches robotic limbs, allowing patients genuine, effective and permanent mobility.

Munjed has performed this operation on hundreds of Australian civilians, wounded British soldiers who've lost legs in Iraq and Afghanistan, and a survivor of the Christchurch earthquake in New Zealand. But nothing has been as extraordinary as his return to Iraq after eighteen years, at the invitation of the Iraqi government, to operate on soldiers, police and civilian amputees wounded in the horrific war against ISIS. These stories are both heartbreaking and full of hope, and are told from the unique perspective of a refugee returning to the place of his birth as a celebrated international surgeon.

Associate Professor Munjed Al Muderis is a world-leading osseointegration surgeon and Adjunct Clinical Associate Professor at the University of Notre Dame Australia in Sydney. He practises as an orthopaedic surgeon at the Norwest Private Hospital, Sydney Adventist Hospital and Macquarie University Hospital in Sydney's northern suburbs. He lives in Sydney with his partner, Claudia.

Patrick Weaver is a highly regarded writer and public relations consultant who worked with Munjed on his previous bestseller, Walking Free. He lives in Sydney and has two adult children.

Dodie
5.0 out of 5 stars From refugee to surgeon. A great contribution to Australia.
7 November 2019
Format: Kindle EditionVerified Purchase
Munjed al Muderis is a well known surgeon in Australia. He arrived as a refugee and has re-qualified as a surgeon here after years of hardship. His form of surgery has helped hundreds of people after amputations. His story is told with interesting case studies as well as examples of some of the political upheaval in his home country, Iraq. The book is easy to read and written in an easy style.
Apart from any thing else, I think this book should be read by those people who think refugees are a drain on our economy.

Amazon Customer Phil
5.0 out of 5 stars A Brilliant Man
20 May 2019
Format: Kindle EditionVerified Purchase
A Humanitarian who has devoted his life to help others who have been so badly injured in the cauldron they call Iraq. Australia should be ashamed for the way he was treated when first arriving in Australia
Read more
One person found this helpful
Helpful
Comment Report abuse

elaine forde
5.0 out of 5 stars Excellent read
14 July 2019
Format: Kindle EditionVerified Purchase
Saw a television interview with Andrew Denton and wanted to learn more.......excellent read and very best wishes dealing with the beaurocracy. Is there a third book about your work in Australia as I have read both book one and two?
Read more
Helpful
Comment Report abuse

N Venturato
5.0 out of 5 stars Must read and amazing life
30 July 2019
Format: PaperbackVerified Purchase
How he went home is amazing and took courage. Al Maderis is an amazing person and dr that has so much to offer the world.
Read more
Helpful
Comment Report abuse
See all 4 customer reviews
Write a customer review
Get FREE delivery with Amazon Prime
Prime members enjoy FREE Delivery and exclusive access to movies, TV shows, music, Kindle e-books, Twitch Prime, and more.
> Get Started
Back to top
Get to Know Us
Make Money with Us
Let Us Help You
And don't forget:
© 1996-2020, Amazon.com, Inc. or its affiliates