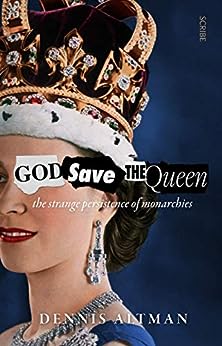 God Save the Queen: the strange persistence of monarchies Kindle Edition

by Dennis Altman (Author) Format: Kindle Edition
See all formats and editions
Sorry, there was a problem loading this page. Try again.

An avowed republican investigates the unexpected durability and potential benefits of constitutional monarchies.

When he was deposed in Egypt in 1952, King Farouk predicted that there would be five monarchs left at the end of the century: the kings of hearts, diamonds, clubs, spades, and England. To date, his prediction has proved wrong, and while the twentieth century saw the collapse of monarchies across Europe, many democratic societies have retained them.

God Save the Queen is the first book to look at constitutional monarchies globally, and is particularly relevant given the pro-democracy movement in Thailand and recent scandals around the British and Spanish royal families. Is monarchy merely a feudal relic that should be abolished, or does the division between ceremonial and actual power act as a brake on authoritarian politicians? And what is the role of monarchy in the independent countries of the Commonwealth that have retained the Queen as head of state?

This book suggests that monarchy deserves neither the adulation of the right nor the dismissal of the left. In an era of autocratic populism, does constitutional monarchy provide some safeguards against the megalomania of political leaders? Is a President Boris potentially more dangerous than a Prime Minister Boris?

"At 153 pages God Save the Queen is a quick read, and Altman packs a lot into it, whizzing through the histories and current political climates of an array of countries to gain better understanding of the way monarchies have sustained themselves and evolved. ... It's the ability, in such a relatively brief space of words, to capture the breadth of diversity and nuances of modern monarchy, that makes Altman's exploration of the phenomenon truly fascinating."
--Ben Pobjie, The Australian

"This very readable little book encourages us to think more about the game of thrones and the different ways it might be played."
--Jeff Sparrow, The Age

"Dennis Altman's peripatetic book Unrequited Love moves from Australia to the United States, across Europe and parts of Asia. Filled with intellectual luminaries such as James Baldwin, Dorothy Porter, Susan Sontag, and Christos Tsiolkas, Altman's life and career has been intense and wide-ranging ... Unrequited Love--a memoir in diaries--is the work of a hugely influential Australian writer and commentator."
--Sebastian Sharp, Australian Book Review

"From Lyndon Johnson to Trump, Altman's diary takes us from the early days of AIDS to gay liberation against a backdrop of Australia's strange love for America."
--Gillian Triggs

"The global struggle for sexual and gender minority rights is one of the most critical and contested human rights movements of our time. As queer communities mobilize, and the coming generation of young people worldwide express greater tolerance, acceptance and calls for freedom, the pushback has been intense. Altman and Symons have done us all an invaluable service in unpacking the complex politics around LGBT rights, demands, cultures and contexts. Queer Wars is essential reading for all engaged in pressing for more just, open and diverse societies."
--Chris Beyrer, Johns Hopkins University, and president of the International AIDS Society

"Dennis Altman's and Jonathan Symons's work Queer Wars is a timely and accessible intervention on the global state of play for queer rights."
--Australian Institute of International Affairs

"Queer Wars is broad in its scope, engaging in its material, thorough in its conception, and passionate in its argument on how advocacy should build a consensus that protects sexual minorities globally from violence and discrimination. A book for strategists, activists, academics and international workers alike."
--Edwin Cameron, constitutional court of South Africa

An avowed republican investigates the unexpected durability and potential benefits of constitutional monarchies. --This text refers to the mass_market edition.

Dennis Altman first came to attention with his book Homosexual: Oppression & Liberation in 1972. His recent books include Global Sex, Gore Vidal's America, and Unrequited Love: Diary of an Accidental Activist. Dennis is a Professorial Fellow at La Trobe University in Melbourne. He has been Visiting Professor of Australian Studies at Harvard, and was listed by The Bulletin as one of the 100 most influential Australians ever.

Andrew Oliver
5.0 out of 5 stars Critical Book Review And Reply to “God Save The Queen” by Dennis Altman
Reviewed in Australia on 31 December 2021
A serious book that addresses the real issues of the republic versus monarchy debate. As someone who has been peripherally involved in Labor For An Australian Republic (LFAR), may I say this is refreshing.
The author is alarmed by the rise of populist nationalism in the second decade of the twenty first century, having been dispossessed of the illusion of inevitable liberal progress by the recent turn of events, what with Brexit and President Trump and the earlier fall of communism.

As we agree that the worst republics do seem to end up worse than the worst monarchies, where should we from there?

The problem seems to originate that monarchs, at least those that avoid regicide, are set up by their ruling class schools and military officer training in “aristocratic” values such as honour and forbearance and tolerance, and that values education enables monarchical systems to function properly even if their formal constitution is badly drafted full of loopholes and held together with incoherent arguments.

On the other hand, in a republic where anybody could end up president, whether directly elected, or the citizen winner of a random drawing of balls like a lottery, or by some collegiate method, the constitution is central to whether the system functions properly. This means a republic needs explicit checks and balances in the constitution, codified reserve powers, a bill of rights, and minority rights enshrined in a legal system to this bill of rights.

The taking over of the US Republican Party by populist nationalists is the ongoing tragedy of this age, the business establishment and academics and country club liberal moderates exposed as lacking voter support, rather like the 1932 no-confidence motion in the Reichstag where the aristocratic government was voted out by a majority of 512 to 42, leading to the worst disaster in history.

The frustrating thing about LFAR is that it is still debating whether or not to have a directly elected President. Very little time is spent in their meetings debating increased checks and balances, codifying the reserve powers, or the necessity of a constitutionally entrenched bill of civil political and legal process rights. All these being prerequisites of any successful republic. All reminding me of Chile 1973 where a Whitlamesque crash through or crash type leader Allende provoked a military coup by acting anti-politically and escalating the crisis rather than through respecting people’s rights and minority rights, and getting involved in legislative compromise and listening to criticism.

Another problem is that LFAR do seem inclined to a minimalist republic, not understanding that it would lead to political crisis and coups. The coup attempt on the 6th January last by Trump supporters should teach us that for the Australian Republic to flourish and prosper a proper set of constitutional checks and balances is required, as we are abandoning the values requirements of our would be heads-of-state.
At the end Dennis Altman asks “Do we need a head-of-state at all?” He answers, “Countries need both national symbols and political umpires …”.

Earlier in his chapter on the failed Australian republican movement, he concludes: “At least in Australia, a meaningful recognition of Indigenous Australians and a bill of rights seem more pressing constitutional matters.”
Read more
Helpful
Report abuse
See all reviews
Report an issue
Does this item contain inappropriate content?
Report
Do you believe that this item violates a copyright?
Report
Does this item contain quality or formatting issues?
Report