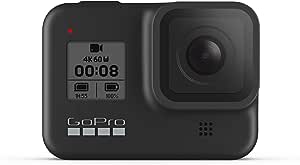 This is HERO8 Black—the most versatile, unshakable HERO camera ever. A streamlined design makes it more pocketable than ever, and swapping mounts takes just seconds, thanks to built-in folding fingers. And with the optional Media Mod, you get ultimate expandability to add more lighting, pro audio and even another screen. There’s also game-changing HyperSmooth 2.0 stabilization with jaw-dropping slo-mo.

This is HERO8 Black—the most versatile, unshakable HERO camera ever. A streamlined design makes it more pocketable than ever, and swapping mounts takes just seconds, thanks to built-in folding fingers. And with the optional Media Mod, you get ultimate expandability to add more lighting, pro audio and even another screen. There’s also game-changing HyperSmooth 2.0 stabilization with jaw-dropping slo-mo.

4.7 out of 5 stars
4.7 out of 5
1,775 global ratings
How are ratings calculated?
To calculate the overall star rating and percentage breakdown by star, we don’t use a simple average. Instead, our system considers things like how recent a review is and if the reviewer bought the item on Amazon. It also analyses reviews to verify trustworthiness.

casey
5.0 out of 5 stars Great camera
Reviewed in Australia on 9 January 2021
Style: HERO8 Holiday BundleVerified Purchase
GoPro Hero 8 is a great camera but the battery life is pretty shocking. Make sure you carry an extra battery around if you plan on videoing for longer that 60 mins because thats probably the max that one battery will last - or at least it is how long ours lasts
Read more
Helpful
Report abuse

Groovychic99
4.0 out of 5 stars Great bundle Price
Reviewed in Australia on 14 February 2020
Style: HERO8 Holiday BundleVerified Purchase
I liked that it came with a spare battery and additional accessories (headwear, SD card and tripod) however I would have preferred if the bundle came in two different bundles that included other accessories like the floater handle with strap instead as underwater filming and shots was what I had purchased the GoPro for rather than for land filming and shots. The instructions (lack of) that is included isn't the best so had to use the help of YouTube to assist with set up etc.
Read more
Helpful
Report abuse

Noah Wallis
5.0 out of 5 stars GoPro never disappoints
Reviewed in Australia on 17 November 2020
Style: HERO8 Holiday BundleVerified Purchase
Got all the extras for the same price other competitors were selling just for the GoPro itself. So definitely a nice steal getting some gear with it! You don’t need to read my review about GoPros just buy one already
Read more
Helpful
Report abuse

Paul Stefos
5.0 out of 5 stars Takes awesome video
Reviewed in Australia on 13 December 2020
Style: HERO8 Holiday BundleVerified Purchase
What an awesome little camera! Its so versatile and shoots magnificently. My only complaint is that the battery life is a bit ordinary...Best way to fix it is buy 2
Read more
Helpful
Report abuse

Tamahere
5.0 out of 5 stars The best
Reviewed in Australia on 17 June 2020
Style: HERO8 Holiday BundleVerified Purchase
Everything it was advertised to be. Best brand best price i could find.
Read more
Helpful
Report abuse

liz
5.0 out of 5 stars smooth videoing
Reviewed in Australia on 29 January 2020
Style: HERO8 Holiday BundleVerified Purchase
my 15 yo loves this GoPro. used it for filming skiing in Japan and the footage is fantastic. bundle good value
Read more
Helpful
Report abuse

M
4.0 out of 5 stars Absolutely incredible in many ways, but falls flat in others
Reviewed in the United Kingdom on 29 November 2019
Style: HERO8 Holiday BundleVerified Purchase
I have owned every generation of the GoPro since the GoPro Hero 5 black and upgraded at each iteration. When I first saw the footage from the Hero 8 Black, I thought okay, what incremental quality increase am I going to get this time. Hypersmooth 2.0 That's what sold it to me. In many ways, GoPro has not listened to its consumers when it comes to software reliability and some of the design aspects of this new GoPro. However, it is still a worthwhile device and depending on how you use it, you might not need this upgrade.

USEABILITY/INTERFACE
In terms of ease of use, this GoPro's interface has changed for the better. Now you don't need to tap furiously over multiple screens and settings to change it to your recording settings. In the past you couldn't save presets to use, but now, you can access this with a couple of taps to get your usual setting. You can set multiple custom easy access settings. There are a couple of quick buttons nearby to provide more or less stabilisation now, which is much appreciate so you can pretty much get what you need to do from the camera screen.

DESIGN
This is where GoPro wins and loses at the same time. It looks very similar to the GoPro Hero 7 Black, but the lens is not detachable. Okay GoPro says its much stronger as a lens, but the reality is, it is not infallible. In the situation the glass breaks, you're expected to fork up for a new GoPro? I don't think so GoPro. The bottom pop out mount attachment is super convenient, but looks a bit brittle. Only time will tell how well it will hold up to regular use. However, it isn't that expensive to replace - so that's a huge plus (that it's replaceable with ease). The hinge for the battery compartment was not well designed. Its a bit fiddly to take off and its very easy to snap off the hinge completely (it's meat to come off, but it comes off a bit too easily for my taste).

HYPERSMOOTH 2.0
This is basically the best feature about the Hero 8 Black. Hypersmooth 2.0 is a vast improvement to the first iteration on the GoPro Hero 7 Black Hypersmooth 1.0. I was completely blown away by the stabilisation. The Hero 7, was advertised as a Gimbal killer, but in my opinion was over advertised a bit. It was stellar, don't get me wrong when comparing to what was out there before. BUT Hypersmooth 2.0 absolutely kills it. I think it's as close to Gimbal killer as it can be on boost mode. Note that boost mode crops the image a bit more.

VIDEO/IMAGE
As per usual, the photos taken by GoPro are usually much more vibrant and crisp that some of the images taken with phones. The wide angle lens is beautiful and is great fun to take photos with. It has no focal point (infinite depth of field), so everything is sharp throughout the photos. I recommend anyone who is on the fence to go check out some photos in youtube reviews to decide whether this style of photo is to your taste. The GoPro hero 8 has a marked improvement when it comes to night mode. It's less noisy and the clarity is much much higher compared to the Hero 7.

RELIABIILTY
I have only been able to test this for a couple of hours, and i have had one issue with frozen GoPro. This I know has been quite common on the GoPro Hero devices, so it did not shock me too much. It's a shame that GoPro has not fixed this in each release. Hopefully with more firmware updates, we will see if this becomes more reliable. It is an annoyance more than anything as you can just take out the battery if it freezes.

BUNDLE
I would totally recommend this bundle - the shorty stand is super convenient to use and is an official GoPro accessory which makes it well built and reliable. Great value for black Friday - don't hesitate!

BATTERY
The battery life has not changed significantly since GoPro Hero 5. Its had incremental improvements but nothing ground breaking. The annoying thing is that these new blue tipped batteries are backwards compatible, but they have a larger output capacity. If you use your old GoPro batteries, you'll find that they don't output enough power to shoot in all of the modes that the new GoPro 8 offers.

In summary, I can recommend the GoPro Hero 8 if you like taking smooth videos. On Hypersmooth 2.0 alone, it was worthwhile for the upgrade from 7 for me, but if you're just into photos and a much more infrequent user, then I'm not sure it's got enough new features to be a must upgrade as such. If you can grab it on black friday or prime sale, then even better!

5.0 out of 5 stars Best Action Camera Ever
Reviewed in India on 27 December 2019
Good packaging and awesome product.
Don't waste your money on other cheap action cameras.

Neelesh
1.0 out of 5 stars Gopro8 not working highly dissapointed
Reviewed in India on 25 January 2020
Style: HERO8 Holiday BundleVerified Purchase
Hero gopro8 black is freezing and live preview is not showing up, I tried changing batteries, tried different memory cards, tried factory reset, ensured it has latest firmware.
Still no luck. And worst part it started happening after 12 days of purchase so cant even return the product(as return window is just 10 days) ...now need to figure out a service center for this idiot device :(
Read more
52 people found this helpful
Report abuse