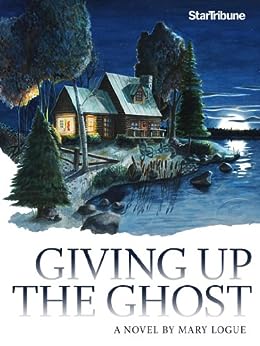 Giving up the Ghost Kindle Edition

Pat Browning
5.0 out of 5 stars A ghost shares his widow's grief
Reviewed in the United States on 2 January 2014
Verified Purchase
Setting: Minneapolis/Lake Minnewaska-Minnesota
Narrator: Wendy aka Weed, a new widow

Opening lines: “At three in the morning, Richard's back flickered down the hallway outside our bedroom; he was wearing a red flannel shirt rolled up at the sleeves and was headed toward the kitchen. I figured he was going to fix himself peanut butter toast. Then I remembered he was dead.”

I thought I was downloading a ghost story, and there is a ghost, but this book is a journal-style study in grief and mourning. It was so depressing at first that I stopped reading after a couple of chapters.

A day later I went back to it and once I got into the rhythm of it, I read right on through. Mary Logue moves the story along with flashbacks, alternating them with present-day scenes. You have to pay attention.

Richard was a successful painter who choked to death on a peanut. Wendy is the one who found his body and now she can't even open the door to his studio to see what he was working on.

Her grief and indecision make for a running conflict with the gallery owner who wants to do a splashy exhibition of Richard's paintings. That conflict reaches a climax during a Thanksgiving dinner that is hilarious but somehow works right into the story.

Wendy's major conflict, however, is with herself. Richard's ghost keeps showing up. She wonders if she will ever let him go, if she is really seeing him or if she is simply nuts.

A couple of passages book-end this story. In one, Wendy thinks, "The thing about a funeral is that it ends." In another, she looks out over a lake that hasn't frozen over yet and thinks, "(I)t was a dark gaping hole that somehow stretched farther than I could see. Death was like that. You could never see the end of it."
Read more
Report abuse

Amazon Customer
2.0 out of 5 stars Good as a daily release...but not as a whole book
Reviewed in the United States on 6 August 2013
Verified Purchase
I started reading this in the daily paper at work, something about it caught my eye as I walked thru the break room and glanced at the paper laying on the table. I should have stuck with it as that. About half-way thru I wanted to read the whole thing, so I purchased the eBook. I was disappointed in the last bit of the story - it almost seemed like it got rushed at the end because they wanted to get it published. I thought the characters were great, I LOVED the Thanksgiving scene (because when I was growing up our Thanksgiving and Christmas day dinner table was always filled with both blood relatives and others we considered as relatives), I loved the whole dinner. And then it just ended. I think there could even have been more characters in the book as the main character was an artist and had so many followers maybe some of those could have also been included. But, I should have left it as a daily excerpt.
Read more
Report abuse

Terry Buys Stuff
5.0 out of 5 stars Great story that pulls you in!
Reviewed in the United States on 15 June 2013
Verified Purchase
I found this book in our local Sunday paper being published as a series that will be released every day. After reading the portion released in the paper I decided I didn't want to wait for the daily series. Living in MN I love local authors. You get pulled into the character Wendy's thoughts and feelings that you will finish this book in no time. It is very well written with descriptive visuals. While it is a love story it is a ghost story as well but not over the top on the ghost. I finished this book in 3 days between work and daily life. I am going to look for more from Mary Logue. I loved the cozy cabin feeling Wendy has while telling the story of her true love. No questions on this one... pick this one up!
Read more
Report abuse

LJ
5.0 out of 5 stars Great book
Reviewed in the United States on 23 September 2019
Verified Purchase
Love this writer! I can always envision what she is saying. I can totally disappear into her stories! I would recommend to all.
Read more
One person found this helpful
Report abuse

Lizzie Schwab
5.0 out of 5 stars Such a good story....
Reviewed in the United States on 23 November 2016
Verified Purchase
I have lost people that I loved through simple tragedy. Mary wrote this as though she has gone through something familiar to me. The story was sweet, heartfelt and tender. The characters were well written. I enjoyed hearing about Richard and all of the others in this book. Mary Logue is really a wonderful story teller.
Read more
Report abuse
See all reviews
Back to top
Get to Know Us
Make Money with Us
Let Us Help You
And don't forget:
© 1996-2021, Amazon.com, Inc. or its affiliates