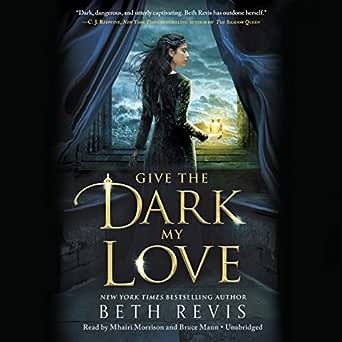 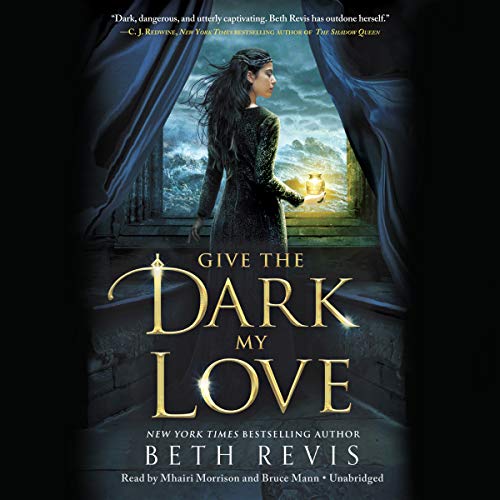 Give the Dark My Love

Don’t be mislead by the cover (which I don’t love), this story is dark and has little romance in it. I really want to redesign that cover with bones and severed limbs and just make it so much darker.

It was Nedra’s story and essentially how she became a necromancer. There was a dude too, Grey and he had a point of view but he doesn’t matter much, he was pretty useless which made sense, cause you know, cis straight white privileged dudes…

I really loved Nedra and felt for her. As she got darker, I couldn’t help but grin. I loved it. I got into the story as I read the prologue and was into it from that point on. I loved the world, the politics and I didn’t even mind Grey. I found him useless but it made sense to me. I seriously cannot wait for the second book in this duology.

S. H. Powell
4.0 out of 5 stars Dark, creepy, and good
Reviewed in the United States on 9 October 2018
Verified Purchase
It’s been so long since I read _Sabriel_ I’d forgotten how much I love necromancy books. _Give the Dark My Love_ is officially a new fave. It started slow but picked up a third of the way through, and then, suddenly, it turned *dark* in a wonderful way. I stayed up until 4 am reading, and if you're at all scared of the dark or think plagues and revenants are creepy, I'd recommend not doing that. Try reading this book in a park on a sunny day, maybe.

Nedra thought she’d be attending the Yūgen academy to study medical alchemy and become a surgeon. When an incurable plague called the Wasting Death starts terrorizing the island, however, she and her instructor, Master Ostrum, begin to suspect that only someone willing to turn to the forbidden fourth alchemy, necromancy, will be able to stop it. It was fascinating to watch Nedra talk herself around to the idea of necromancy despite how evil it is. Throughout the novel there are some visceral surgery scenes; they're not as gory as other reviewers suggest, but some of them are harrowing for other reasons. Once Nedra reaches her tipping point, the story takes a dark turn, and Nedra's future begins to look hopeless—as if nothing will be the same again, even if Nedra succeeds in stopping the plague. There's quiet horror, and grief, and a picture of a person who's lost everything and is now willing to do whatever it takes not to feel like it was all for nothing. It works.

It's a fantastic story, but can’t quite make it to five stars because of what is, frankly, a very blunt ending that I found unsatisfying. I didn't need the ending to be different (god, no), and I loved the moment of choice in the final chapter where it looks like Nedra will have the opportunity to be a more typical fantasy heroine (which she really isn't). But it ends very abruptly after that moment, with no dénouement, not even a little epilogue-style scene to set up the next book.

And speaking of which: I did not know this was part 1 of a duology when I started reading, and there's nothing about the story itself that indicates there's a sequel on the way. (From the author’s note, it sounds like this was a long book that got split into two parts? Unclear.) But that's crucial information to have, because if you think this is a standalone, like I did, the ending reads very differently. _Give the Dark My Love_ would definitely work as a standalone, since the main storyline is resolved, but I'd probably knock it down to 3.5 stars for the ending and a few loose threads. As a first installment of a series, however, this is a solid 4-star book.

T. McMillian
3.0 out of 5 stars Macabre read! Focused Impressive Heroine.
Reviewed in the United States on 12 February 2019
Verified Purchase
I need to "clear the air" so to speak to kick this review off. I had read the blurb.. and I felt it was a tad misleading. To me personally, the blurb gave the impression that there was going to be a bit of romance in here. What happened here was not that… This was for lack of a better description.. a very macabre read. The impression of a love interest possibly saving the FMC Nedra, was a false impression lol. In fact, I feel like if I hadn't been waiting for the romance aspect to finally kick in and get serious the whole time I think that I could have weathered this out better.

That being said I really thought this had some great potential with very interesting concepts and a well thought out magical/scientific basis. The story line was easy for me to sink into right from the beginning. It really started off with a bang. If it weren't for my confusion of an expectation vs reality nature here. I think that I could really have gotten behind it a little more. I feel like the main criticisms I have were the characters having really narrow personalities, and there being hardly any chemistry between characters, and the back story and world building felt a little like an after thought, thrown haphazardly in at times.

Our story starts with Nedra, our FMC, journeying from her poor northern village to the city of Yugen to attend an alchemy school (seemingly for only wealthy, prominent, and spoiled rotten young adults) on scholarship. Nedra, is an ambitious girl, with a true passion to heal the mysterious wasting plague that has been popping up all over their island causing people's blood and limbs to turn black and eventually die. She goes to attend the school and finds its like nothing she has ever known before. Apprenticed under a very strict master. I feel like the "schooling" part of this story was super rushed over, almost a fact dumb but at the same time hardly giving us any information. Most of the students treat Nedra with disdain, all but Grey aka star pupil. Honestly, I almost felt like Grey was just a side character.. he mostly just walked through the scenes, acting bored, spouting opinions or feeling sorry for himself, he really had no purpose for this story. As Nedra furthers her studies she becomes more and more aware of the political turmoil her island is in, as well as the overwhelming increase in "plague" victims. People are dying left and right and Nedra is desperate for answers grasping at anything to save them… even forbidden Necromancy. Learning that the plague is probably caused by a Necromancer, Nedra turns toward the 4th alchemy once her parents die from the sickness and her sister is struck. The island is in chaos, revolting, government officials dead or in disposed. Her Master at school has been taken in for teaching her Necromancy… Taking up her new talent she storms toward the hidden Emperor to get some revenge and find some truth.. though that truth may not be what she thinks…

There were some hidden plot twists and turns though they weren't super surprising really. Though we aren't honestly left on a cliffhanger… we are left with things.. unfinished I guess, and with no knowledge of where things are headed for Nedra now that she is a Necromancer. In my opinion it was a little anticlimactic and kind of ended abruptly. I did have some issues with some aspects of the book but all in all it was an interesting read.. I think it really could have been epic but… maybe in the next book…
Read more
One person found this helpful
Report abuse
See all reviews
Get FREE delivery with Amazon Prime
Prime members enjoy FREE Delivery and exclusive access to movies, TV shows, music, Kindle e-books, Twitch Prime, and more.
> Get Started
Back to top
Get to Know Us
Make Money with Us
Let Us Help You
And don't forget:
© 1996-2020, Amazon.com, Inc. or its affiliates