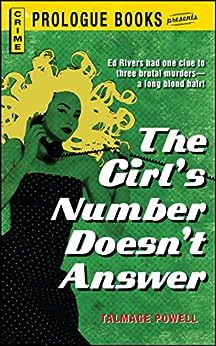 Christopher (o.d.c.)
4.0 out of 5 stars Ed Rivers runs through it
Reviewed in the United States on 24 May 2015
Verified Purchase
Publication date: 1960. The second Ed Rivers novel, and not as good as  The Killer is Mine (Prologue Books) , but still enjoyable.

Here's big Ed Rivers, once again trying to open a murder case that everyone thought was open and shut:

CHAPTER 4 THE FILE on the murder had started lustily and grown fatter as each edition came off the presses. I waded through the gory pictures and details. Most of it I knew. Like all authentic horror, the story was too simple and stark to need much embellishment for effect. Photographic coverage had been extensive. Price [the editor] had an innate sense of taste under his cynicism which had kept him from running some of the worst of the pictures.

The Japanese businessman who was killed turned out to have a partner, and the partner turns out (you know how these thing go) to have a beautiful, bratty daughter:

She offered one of the glasses. She didn't let it go right away, and we both stood holding it for a second.
"What kind of business are you in, ugly man?"
"I'm a private detective."
"Really?" She seemed interested, but not in my occupation. She stepped back. The bored, vacant look was gone from her dark eyes for a moment. "Good old plebeian beer," she said. "Here's to big, ugly men who drink beer."

Despite no real twists- the story moved quickly, and once resolved, wrapped up with a terse and effective mano a mano fight. The steamy Tampa atmosphere and the dialogue, both skillfully handled, compensate for a plot built from recycled parts.

Dave Wilde
4.0 out of 5 stars A Terrific Ed Rivers PI Novel
Reviewed in the United States on 7 October 2014
Verified Purchase
“The Girl’s Number Doesn’t Answer” is the second of five Ed Rivers novels authored by Talmage Powell. The others in the series are: (1) “The Killer Is Mine” (3) “With A Madman Behind Me” (4) “Start Screaming Murder” and (5) “Corpus Delectable”. Rivers is a private eye in the Tampa Bay area, having his office in Ybor City, the Spanish section. Rivers was originally a New Jersey police officer who fell for a girl who left him for a hood and then watched as his girl and the hood lost a race with a freight train. He has some bitterness about this. He thought she had been “everything fine and decent molded into human form.” Rivers is not a Tampa native and can’t really stand the heat there. Each evening he buys a twenty-five pound block of ice and places it in front of a fan to cool down his bedroom or soaks in a tub of chilled water. He’s tall, gangly, and ugly. He explains, “My face usually gets a reaction. I’ve seen it fire the eyes of women with feelings ranging from acute distaste to hot hunger.”

A friend of Rivers’ (Nick Martin) is accused of a gory triple-murder beheading committed by use of a massive samurai sword that been hanging in Nick’s living room. Everything points to Nick being the killer such as opportunity, access, etc. and it doesn’t help that Nick and his wife (Helen) ran from the murder scene and were hiding out. Rivers, with all odds against him and pretty much on his own, is out to prove Nick’s innocence. Nick remarks at one point that Rivers doesn’t have many friends because the word means something to him. “You give a part of a kind of holy thing inside of you when you call somebody a friend.”

Like all of Powell’s books, this is a good, solid read and moves quickly without too many plot entanglements. If you enjoy fifties PI novels, give Powell’s Ed Rivers series a try. It is simply good solid PI fiction. It doesn’t try to be too fancy, too poetic, or too philosophical, but once you pick up one of his books, it is really difficult to put it down before you reach the conclusion.
Read more
One person found this helpful
Report abuse

James B. Johnson
5.0 out of 5 stars 5 Starz
Reviewed in the United States on 25 November 2013
Verified Purchase
Three neighbors are brutally murdered, and a disabled war hero is charged with the crimes. The war heroes samurai sword is the murder weapon. Ed Rivers goes looking for the real killer tho the war hero suspects he may have killed the people during an alcoholic blackout. A 5 Star read.
Read more
Report abuse
See all reviews
Back to top
Get to Know Us
Make Money with Us
Let Us Help You
And don't forget:
© 1996-2021, Amazon.com, Inc. or its affiliates