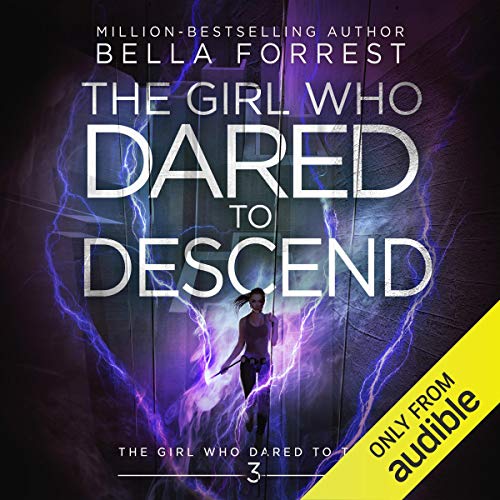 Bella Forrest (Author, Publisher), Kirsten Leigh (Narrator)
4.7 out of 5 stars 364 ratings
See all formats and editions
Sorry, there was a problem loading this page. Try again.

Return to the Tower and reunite with Liana Castell in the breath-stealing third book of The Girl Who Dared to Think series.

Beware of spoilers in the reviews that are without spoiler alerts.

4.7 out of 5 stars
4.7 out of 5
364 global ratings
How are ratings calculated?
To calculate the overall star rating and percentage breakdown by star, we don’t use a simple average. Instead, our system considers things like how recent a review is and if the reviewer bought the item on Amazon. It also analyses reviews to verify trustworthiness.

Amazon Customer
4.0 out of 5 stars Wonderful
Reviewed in Australia on 26 April 2018
Verified Purchase
Brilliant series, really enjoyed the way the charters were developed over the series of books.

Have purchased 4 in the series so far and look forward to reading the rest.
Read more
Helpful
Report abuse

Fiona Ninnes
5.0 out of 5 stars I have become so addicted to this series.
Reviewed in Australia on 3 November 2019
Verified Purchase
These books are totally addictive. If you start this series, expect to become totally hooked!
Read more
Helpful
Report abuse

Rebecca Slater
5.0 out of 5 stars Five Stars
Reviewed in Australia on 10 November 2017
Verified Purchase
Loving this series, I need to know what happens next.
Read more
Helpful
Report abuse

Cheryl Taylor
5.0 out of 5 stars Awesome storyline
Reviewed in Australia on 7 November 2017
Bella Forrest has done it again. The characters and storylines are so awesome. If you love stories like the Hunger Games you will love this book.
Read more
Helpful
Report abuse
See all reviews

Arkham Reviews
1.0 out of 5 stars Almost entirely filler
Reviewed in the United Kingdom on 4 December 2019
Verified Purchase
Please note that this novel picks up directly where the previous instalment left off, so I would certainly recommend reading them in sequence if you want to fully appreciate what is going on.

While the first instalment of this series left me wanting more, I unfortunately feel that the series has been on a downhill slope since then. Although The Girl Who Dared to Descend is almost 400 pages in length, these are almost entirely filler. The cliffhanger of The Girl Who Dared to Stand is swiftly resolved and, after this, the tone of the novel abruptly changes. While previous plot points - including Paragon, the hunt for the other AI and the possible existence of life outside of the Tower - are occasionally touched upon, these are largely swept aside. Instead, the plot this time focuses on a lengthy contest.

The Tourney felt very typically dystopian, and personally I did not think this was a good thing. It took the form of a series of trials that tested the skills that Knights excelled at in order to determine who would become the new Champion. The focus on Liana and her friends competing in this contest really caused the plot to stall. The addition of Ambrose as a character felt a bit superfluous at this stage, as he did not make much of an impression and detracted attention away from the other more pressing plot points that should have taken up Liana's time.

I also found the narrative a little exhausting to read this time. While the Tourney could have been exciting, it just served to make me aware that the author has a habit of telling the reader things, rather than showing them. Liana spent pages outlining every strategy to the reader before proceeding and frequently repeated the same information - primarily how much she missed Grey - over and over. With a tight edit to remove all repetition of information, the novel would probably have been about a hundred pages shorter.

The novel also ramped up to a very sudden cliffhanger that completely took me by surprise. While this series has largely been pretty tame to this point, the final sting was shockingly violent and may be disturbing for sensitive readers. It also resolved nothing, only serving to raise more questions about the many competing factions within the Tower while explaining nothing.

In terms of character, the novel has a lot of issues. Liana still does not feel like a twenty year old. Her preoccupation with her relationship with Grey and generally childish naivety make her feel as though she is much younger than this. I also found her to be rather irritating in this novel, as people rarely seem to question her behaviour any more. Liana is rapidly becoming a sort of Mary-Sue - infallible and massively competent in world full of people who are far less so.

As most other characters are relegated to the background this time around, the only other protagonist of note is Leo. While I won't go into this much for fear of spoilers, I will say that he is one of the brightest points in the novel as he adds some much needed humour to the tale. Unfortunately, Liana is so focused on herself that the novel rarely takes the time to detail Leo's development as he learns more about humanity. This was disappointing, as it did feel as though his plot line had been shunted onto the back-burner in this instalment.

So, in all, I was really disappointed by this one. I will probably pick up the next instalment at some point to see if it gets back on track, but I'm not really in any hurry to find out.
Read more
3 people found this helpful
Report abuse

Fintan15
3.0 out of 5 stars okayish but taking far too long to get to the important bits of the story
Reviewed in the United Kingdom on 18 December 2017
Verified Purchase
Not as interesting as the earlier parts of this series and its companion series, this dragged, especially as I had expected Descend to mean finally she was going to get outside. I am eagerly awaiting when she gets out of the claustrophobic tower, finds the outside colonies and stops the pollution of the river, THE most important part of the stories! Also tired of the constant Americanisms, grammar and spelling and the usual (yawn) idea that only America survives a holocaust - not true - more from other parts of the world please. I find it very hard to visualise the scenes where there is fighting and swinging about, use of the lashes etc. I have to skim over it as the descriptions don't help me at all.
Read more
2 people found this helpful
Report abuse

Lauren
5.0 out of 5 stars I really enjoyed this book
Reviewed in the United Kingdom on 10 February 2018
Verified Purchase
I really enjoyed this book, along with the others in the series.
If you enjoy young adult distopian books like the hunger games, or divergent, then you should like this as it is similar genre.
I have read a few other series by Bella Forrest. I enjoyed them all, I like her style of writing. Her books are interesting, and not too heavy, they are easy to read.
My favourite this about this book is how it is set in the same dyatopian world as another series she wrote, this made it more interesting and was what made me want to read it in the first place. I found that I like these books even more than the other series I read though!
Read more
One person found this helpful
Report abuse

KM
4.0 out of 5 stars Good
Reviewed in the United Kingdom on 28 July 2021
Verified Purchase
Still can’t understand what lashing is and really just want to get through this series. Can’t be read with time between the books or you would forget what is going on
Read more
Report abuse

Jewelz
5.0 out of 5 stars The girl who dared to Descend
Reviewed in the United Kingdom on 11 November 2017
Verified Purchase
Another enthralling episode to a brilliant series. Bella Forrest has a never ending imagination. Although the book should come with a warning “ending this episode soon” as I was gripped to my chair and felt totally deflated once I read the last words. December for the next episode it can’t come quick enough.
Read more
Report abuse
See all reviews
Back to top
Get to Know Us
Make Money with Us
Let Us Help You
And don't forget:
© 1996-2021, Amazon.com, Inc. or its affiliates