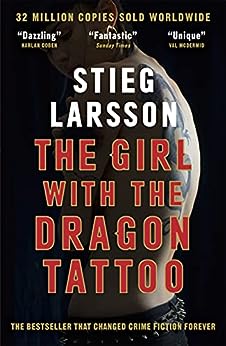 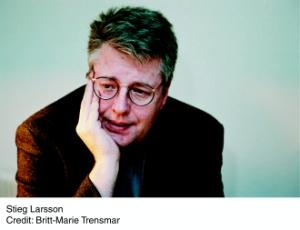 The Girl with the Dragon Tattoo: The genre-defining thriller that introduced the world to Lisbeth Salander (Millennium Series Book 1) Kindle Edition

Stieg Larsson was the Editor-in-Chief of the magazine Expo. He was a leading expert on anti-democratic, right-wing extremist organisations. He died in 2004, soon after delivering the text of the novels that make up the Millennium Trilogy. Martin Wenner has starred in several films including Another Country and The Rainbow, and has also worked with Radio 3. --This text refers to the audioCD edition.

I doubt you will read a better book this year - Val McDermidIntelligent, complex, with a gripping plot and deeply intriguing characters. The author's early death is a great loss - Philip PullmanWhat a cracking novel! I haven't read such a stunning thriller debut for years. Brilliantly written and totally gripping - Minette Walters --This text refers to an alternate kindle_edition edition.

An international publishing sensation, Stieg Larsson's The Girl with the Dragon Tattoo combines murder mystery, family saga, love story, and financial intrigue into one satisfyingly complex and entertainingly atmospheric novel. Harriet Vanger, a scion of one of Sweden's wealthiest families disappeared over forty years ago. All these years later, her aged uncle continues to seek the truth. He hires Mikael Blomkvist, a crusading journalist recently trapped by a libel conviction, to investigate. He is aided by the pierced and tattooed punk prodigy Lisbeth Salander. Together they tap into a vein of unfathomable iniquity and astonishing corruption. --This text refers to an alternate kindle_edition edition.

"Intelligent, complex, with a gripping plot and deeply intriguing characters." Philip Pullman, The Guardian "A rip-roaring serial-killer adventure." The Mail on Sunday "Scores on every front - character, story, atmosphere." The Times" --This text refers to an out of print or unavailable edition of this title.

Stieg Larsson was the Editor-in-Chief of the magazine Expo. He was a leading expert on anti-democratic, right-wing extremist organisations. He died in 2004, soon after delivering the text of the novels that make up the Millennium Trilogy. --This text refers to an out of print or unavailable edition of this title.
Read more

4.5 out of 5 stars
4.5 out of 5
9,873 global ratings
How are ratings calculated?
To calculate the overall star rating and percentage breakdown by star, we don’t use a simple average. Instead, our system considers things like how recent a review is and if the reviewer bought the item on Amazon. It also analyses reviews to verify trustworthiness.

Kindle Customer
4.0 out of 5 stars Engaging and well paced.
Reviewed in Australia on 6 January 2017
Verified Purchase
Refreshingly multi dimensioned characters with deep complexities and secrets help the book move along at a nice pace. The Swedish backdrop is neither celebrated nor criticised - presented as a matter of factly that adds to the charm of the book.
Read more
One person found this helpful
Helpful
Report abuse

Georg_se
5.0 out of 5 stars Could. Not. Put. It. Down.
Reviewed in Australia on 12 May 2016
Verified Purchase
This book completely swallowed my social life for a week... Then I read the second book "The Girl who played with Fire" and it did the same.

Jan Hill
4.0 out of 5 stars Lisbeth Salander-unforgettable!
Reviewed in Australia on 2 November 2016
Verified Purchase
A fast-moving well-written thriller, brutal in places but exceptional for the character of the enigmatic Lisbeth Salander. Not for the squeamish.
Read more
Helpful
Report abuse

Brett Waldock
5.0 out of 5 stars The Girl with the Dragon tattoo
Reviewed in Australia on 12 April 2014
Verified Purchase
enjoyed the book so much I will search for more books from this author...Absolutley sensational reading that keeps you totally engrossed
Read more
Helpful
Report abuse

Natasha Kam
5.0 out of 5 stars Forever a good book
Reviewed in Australia on 6 October 2015
Verified Purchase
I've read this like 3 times now it's a wonderful book and I'll definitely read it again
Good work on keeping it interesting
Read more
Helpful
Report abuse
See all reviews

Jonathan Fryer
5.0 out of 5 stars A gripping page-turner full of shocks and surprises
Reviewed in the United Kingdom on 2 October 2017
Verified Purchase
I watched the film of The Girl with the Dragon Tattoo (the original Swedish version, directed by Niels Arden Oplev) late at night, sitting on the top deck of a cruise ship that was traveling from Accra to Cape Town. The film was projected onto a screen under a star-spangled sky and there was only one other person present, a lady of a certain age, who got up and left hurriedly when the Lisbeth Salander (the girl of the title) launched a particularly calculated and sadistic attack on her sexually exploitative guardian. The film was so brilliant that I was nervous of reading the book, but now I have I acknowledge that it is even richer, more complex, more troubling. It would be the first of what author Stieg Larsson intended to be a whole series of novels, though he died prematurely after completing only three, published posthumously. So he never knew what critical acclaim he would receive -- deservedly so, on the basis of this gripping page-turner, where shocks and surprises abound. So of course now I can't wait to read the other two.
Read more
14 people found this helpful
Report abuse

Bookman Pete
5.0 out of 5 stars In the beginning
Reviewed in the United Kingdom on 23 September 2017
Verified Purchase
Re-reading the trilogy and the secret with this book is that its a prologue to the real story, with its own plot and conclusion, to introduce the characters with a few slight hints to what follows, but you really need to read The Girl That Played With Fire and a the Hornets Nest to discover the real story. The 2 subsequent books, by a different author are just bandwagon books.
If you want to watch the films, the original Swedish films are the best, a film of each of the three books. The Hollywood travesty with Daniel Craig isn't worth the effort.
Read more
10 people found this helpful
Report abuse

Reviewer19
3.0 out of 5 stars Good Book
Reviewed in the United Kingdom on 30 September 2019
Verified Purchase
Good Book, read in just under two weeks. Content is unnecessary and very graphic in places so won't be reading the next two. Parts about journalism and business/finance is very good, pity it isn't about this more.
If you found this review useful, please mark it as helpful.
Read more
5 people found this helpful
Report abuse

Liam J Madden
5.0 out of 5 stars Nordic Noir At It's Best...
Reviewed in the United Kingdom on 9 December 2020
Verified Purchase
This is with little doubt a brilliant exploration of 'Nordic Noir'. As a book that manages to convey both brilliance and extremely a well thought out story, there's very few books that live up to the hype and 'The Girl With The Dragon Tatoo' is definitely one of them. It's brilliant on many levels.
Although there is sadness in the passing of Stieg Larsson, the three books that he wrote in the 'Millenium Series' manage to 'break the mould' when it comes to massively improving the thriller genre. Just about every word in this first novel is masterful and even the dialogue has to be admired.
Lisbeth Salander and Mikale Blomkvist are the two strongest characters that manage to take the novel up to dizzying heights. Apart from them, the various characters throughout the book are expertly thought out and it is little wonder why this genus piece of writing managed to become such a success.
Although concentration is required for the first chapter, the rest of the story is beautifully written and although shocking in parts, it's a book that makes it's points very well and extremely carefully. Salander stops the book becoming trash as her strength holds the believability of the work together. Highly recommended.
Read more
Report abuse

Luke
5.0 out of 5 stars An epic!
Reviewed in the United Kingdom on 12 June 2020
Verified Purchase
Reading this book I often felt that too much description was being given to every single situation and thought at the time that I was going to write something along the lines of "some books are long because they describe everything in such detail, not because a lot actually happens in them. This is one of those books." And a little bit of me feels like that with this book. But then in hind sight, this book tells two incredible stories. Theres a murder mystery embroiled in family drama whilst supporting a financial investigation. It's truly a great book.
Read more
Report abuse
See all reviews
Back to top
Get to Know Us
Make Money with Us
Let Us Help You
And don't forget:
© 1996-2021, Amazon.com, Inc. or its affiliates