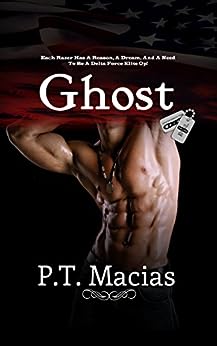 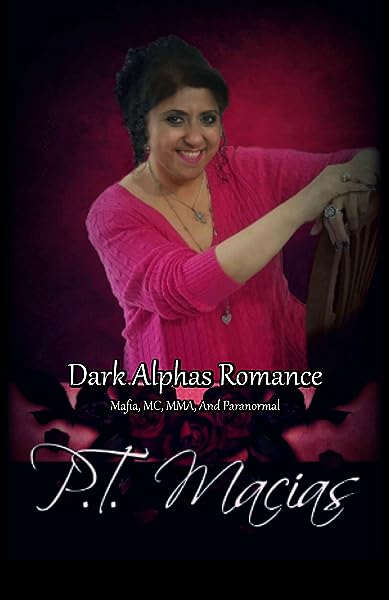 Ghost , Razer 8: Each Razer has a reason, a dream, and a need to be a Delta Force Elite Op Kindle Edition

Teri Caiazzo
5.0 out of 5 stars Adventure, love and danger.
Reviewed in the United States on 9 May 2015
Verified Purchase
In this book of the series we meet Nathaniel Jackson, also known as Ghost, to his partners. He is part of an elite team of Delta Force, called Razor 8, the are part of the Marines. While he is on leave, he goes home to see his younger sister, Charlotte, graduate from high school, but soon finds that things at home never change. His father still believes the lie his best friend told him that his wife had an affair, and neither Nathaniel or Charlotte are his children. When he first heard of this he turned to drinking and beating his wife and both children. By the time he turned 18, he couldn't take it anymore, and joined the Marines, now that he has seen his sister graduate, and knows she will be leaving for college soon, he packs his things, and goes home, which is California for him, and intends to spend the rest of his leave with his partner and best friend, who is more like a brother to him, Roberto De Leon. also known as Loco, because under the most dangerous situations he always stays calm. He goes to meet his friend Roberto and the decide to go to get something to eat, drink, and pick up women. Roberto takes him to a Latino club, which he always wanted to go to, and can't believe all the beautiful women there.
Andrea Martinez, is a sweet innocent Mexican girl, who is being bothered by a neighborhood hoodlum by the name of Marcos Perez, he has a reputation of dating women, getting them hooked on drugs and then turning them into prostitutes. As she is walking away from the bar, on this particular night, trying to get away from Marcos, and Nathaniel is walking toward the bar, he is turned to look at the band, and not watching where he is going. He bumps into and apologizes to her, and then sees her beautiful face, she suggests that she would like to dance, and he gladly asks her to dance. He has only a few days left on his leave, but knows he wants to spend every moment with her.
This is more than a love story, it is reach with adventure, and nail biting situations. I suggest you read this book, and since summer is coming perhaps buy the series, they are all great! What better way to get a tan, while lying on the beach, than with a great book, or books. I hope you enjoyed this book as much as I did, but I'm sure you will. Happy reading.
Read more
One person found this helpful
Report abuse

Susie Fitzwater
5.0 out of 5 stars Truly great story!!!
Reviewed in the United States on 10 February 2014
Verified Purchase
From the first book till this one I was really excited to start this story. I love how this story started off. It truly unfolds nicely from the first book till the next. It makes you ready to start the next and to learn each individual character. Ghost is truly magnificent and just love how his character faces his challenges head on as they unravel throughout the story.

I felt sadness with Andrea as Nathan left on the mission that you read about in the first novel. You truly can feel what the characters feel about what they go through. P.T. Macias offers each individual thoughts and she has an unique writing style that I haven't seen in any other books that I have read. She mixes spanish with and what they mean as you read it.
Andrea was a great character. She faced and conquered something that you see happen in real life. If you have a chance i highly recommend you read this book and if you haven't already pick up the first book and read it. You will truly enjoy every minute of it.
Read more
One person found this helpful
Report abuse

Roxie's Ferguson /Roxie's Romance Reviews
5.0 out of 5 stars "One sexy Ghost Lol"
Reviewed in the United States on 30 March 2015
Verified Purchase
This book is so Awesome, and my Ghost is so sexy!. It seems all the characters in this series are amazing. Ghost is a member of a elite Delta Force team called Razer 8 Infinite team of the government. Ghost and his team mates get some time off so he heads home to hang out with his friend and team mate Loco. They go to a club where he meets a Latino woman named Andrea. There is an instant connection between them. When Andrea looks into Ghosts eyes she knows he is her soul mate. Ghost also feels Andrea is his soul mate only there is a thug named Marcos has plans for Andrea. Marcos works for a man who runs a club that is really a whore house he pays Marcos to kidnap her. The way P.T Macias links her books together you can follow the lives of her key characters on their adventures!. Once you read one book you can not wait to read the next!.
Read more
One person found this helpful
Report abuse

shellie hedge
5.0 out of 5 stars OH MY GOD GHOST!!!!!!
Reviewed in the United States on 9 June 2014
Verified Purchase
I think that so far Ghost has got to be my fav of the Razor 8 Delta Force. His story is amazing and he is so sexy. P T Macias is an amazing author and she writes like nothing that I have ever seen. I am so happy that I found these books and made sure that I read them. P T takes you into the story like no one else, the way she writes makes you feel like you are right there with the characters in the book. I am ready to read the next on and I can't wait, to read Redfox, and Bulldog. I think that everyone should read these books and you will love them.
Read more
One person found this helpful
Report abuse

marshab
5.0 out of 5 stars Ghost: hot, hot, hot!!!
Reviewed in the United States on 22 December 2013
Verified Purchase
Ghost and Andrea are really hot for each other. When the unthinkable happens, Ghost calls up his team to help him save her.

These characters are well-written and believable. They are written in such a way that they feel like friends or family.

Awesome, well-written scenes put the reader into the scene. The first person point of view also puts you into the head of the characters.

I can't think of any series that I have enjoyed more than the Razer 8 series.
Read more
One person found this helpful
Report abuse
See all reviews
Back to top
Get to Know Us
Make Money with Us
Let Us Help You
And don't forget:
© 1996-2021, Amazon.com, Inc. or its affiliates