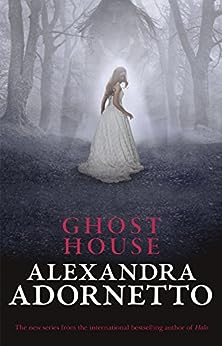 by Alexandra Adornetto (Author) Format: Kindle Edition
See all formats and editions
Sorry, there was a problem loading this page. Try again.

NEW FROM THE INTERNATIONALLY BESTSELLING AUTHOR OF THE HALO TRILOGY

'Alex is more real that anyone I"ve ever know. And him being dead ... really doesn't change a thing.'

After the death of her mother, Chloe Kennedy starts seeing ghosts again. Spending time at her grandmother's country estate in the south of England helps Chloe deal with her grief and the spirits that haunt her.

Until she meets a mysterious stranger.

Alexander Reade is 157 years dead, with a secretive past and a alluring force that draws Chloe more strongly than any ghost she's encountered before. But the bond between them infuriates the vengeful spirit of Alexander's past love, Isobel. And she will stop at nothing to destroy anyone who threatens to take him from her.

This paranormal romance...provides a solid entry into the genre....A final, interesting twist revealed on the very last page should spark readers' anticipation for the next installment in this gothic romance series. -School Library Journal This should attract young teens looking to swoon over the heightened emotions of star-crossed lovers. -Booklist Adornetto's first Ghost House saga title is a winner, pairing a haunting ghost tale with a dreary and suitable location. Her heroine is strong, colorful and very entertaining. Readers will love this introduction and eagerly anticipate the next offering. -RT Book Reviews Suspenseful, beautiful, haunting; we fell under the spell of this gothic ghost story. -Justine Magazine --This text refers to the hardcover edition.

From the New York Times bestselling author of the Halo trilogy comes the start of a beautiful and powerful new series. --This text refers to the audioCD edition.

Alexandra Adornetto is now eighteen, and was fourteen when her first novel, The Shadow Thief (inspired by Peter Pan) was published in Australia. Her favourite things include theology, country music and her dogs, Tinks and Boo. Ally is currently splitting her time between Australia and the USA as she works on the final instalment of the Halo series. You can visit Ally and her wide network of fans on Facebook and Twitter.

Emily Foster began her voice talent career in Los Angeles, both as a character in short animations and as a narrator for television documentaries. She studied acting in Detroit and in Portland. Audiobooks are a recent addition to her performance resume. --This text refers to the audioCD edition.
Read more

Jacky Pronk
5.0 out of 5 stars Fantastic
Reviewed in Australia on 27 September 2016
Verified Purchase
It's been awhile since I've read a book at I couldn't put down.
Loved it, can't wait for the next one!!
Read more
Helpful
Report abuse

Carla
5.0 out of 5 stars A must read
Reviewed in Australia on 5 September 2014
I couldn't put this book down! Miss Adornetto is fabulous in her writing. Great story she hits the right emotions with just the right touch. I highly recommend this book. Can't wait for the next one, bring it on! just a couple more months. Please read this book you will like it I guarantee it!
Read more
Helpful
Report abuse

Copper Top
5.0 out of 5 stars Ghostly experience!
Reviewed in Canada on 17 April 2015
Verified Purchase
It's been a long time since I just read a novel, instead of an educational book. Being an ammature ghost hunter myself, I really enjoyed this book! The author described the ghostly experiences with accuracy, from what I know about these types of events and encounters. Fun book to read!
Read more
Report abuse

deb
4.0 out of 5 stars NOT a Second Ghost House book
Reviewed in the United States on 6 September 2016
Verified Purchase
I was majorly disappointed to receive my pre-ordered copy of Lament, thinking it was the sequel to Ghost House. I waited 6 months for the delivery--now I'll be shipping it back to Amazon tomorrow since it's only a renamed paperback version. Ghost House is a fantastic book & I've read it twice. Amazon's handling of the listing--not so much. If you look closely at the cover art, it does say in tiny letters that Lament is "formerly Ghost House" but does anyone really look that close at cover art? FYI, the sequel to Ghost House is Ghost Hour, due out 6/27/17. Apparently not a trilogy, but a sequel. Sad that we Adornetto fans have to wait so long after thinking we had a second book in a great series to read--but so it is.
Read more
11 people found this helpful
Report abuse

Zellie
5.0 out of 5 stars I know some stuff didn't make sense but I kinda really.... loved this.
Reviewed in the United States on 10 November 2014
Verified Purchase
Not going to lie, I was drawn into the cover before anything else happened. I love how it's misty behind him and he's surrounded by trees. Something about it is just... eye catching. Makes you incredibly curious.

Chloe seems to have a problem, she can see ghosts. I know people in real life who have this problem as well and handle it a bit differently than Chloe. Her mother taught her to tell them to go away, so they did. But when she's forced on a holiday to England to give her father some space to recover it seems like the ghosts are coming from everywhere and of course there's Alex. I don't know what to make of him, he seems like he doesn't know what to make of himself actually. It's okay Alex, the readers feel just as twisted and confused as you do. It just seemed like at times Alex was a bit careless and withholding on certain information that Chloe could had found useful had he told her earlier.

Joe on the other hand, I really really liked. He seemed like such a great guy and even after the... situation. The guy took everything with stride and wasn't ashamed to protect or stand up or make sure Chloe was okay. It was like it was something he just wanted to do. And not to reflect on my own failure of a love life here but I found him to be very sweet and easy to like. If only Chloe weren't so dense.

There was a pretty hefty fear factor in these pages but instead of scaring me they kept me turning the pages. I've noticed this is like the 3rd book I've read recently that has to do with creepy things, mansions and England. Is there something I should avoid when I travel over there? IS THERE SOMETHING I SHOULD KNOW?!

Overall I kind of thought the fear factor element was a little hard to understand. Throw Alex in there too. But the ending. The ending had me saying, "no no no no." as soon as I realized it was the last page.

YOU CAN NOT END A BOOK LIKE THAT AND EXPECT NO ONE TO FREAK OUT!

Seriously. I need to know what is happening. Like, yesterday. Ugh.
Read more
Report abuse

BookCrazyJulz
5.0 out of 5 stars It's about time!!
Reviewed in the United States on 15 September 2014
Verified Purchase
This was one of my most anticipated books of the year! I loved the Halo trilogy and I've had this pre ordered for awhile now I devoured it in one sitting!! I only out it down to eat! I was completely enamored in the story. I loved how Alexandra's writing about the ghosts gave me the creeps and I loved how she described those scenes when Chloe saw what transpired between Alex, Isolbel, and Carter. I loved Joe Parrish and everything he did for her throughout the story. The cliff hanger was pretty neat too. I cannot wait for book 2! If you want a hauntingly romantic tale then this one is for you!!!
Read more
One person found this helpful
Report abuse

amzster08
4.0 out of 5 stars Not A Sequel
Reviewed in the United States on 31 August 2016
Verified Purchase
This book is apparently just the paperback version of Ghost House released back in 2014. Im not sure why they changed the name, but I pre-ordered so excited for a sequel and that is not the case. It is definitely worth your read if you have not read Ghost House, just be aware this is the same content with a different title.
Read more
7 people found this helpful
Report abuse
See all reviews
Back to top
Get to Know Us
Make Money with Us
Let Us Help You
And don't forget:
© 1996-2022, Amazon.com, Inc. or its affiliates