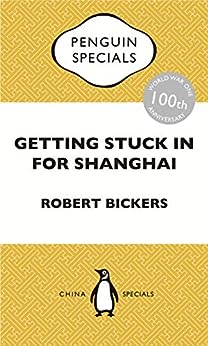 Getting Stuck in For Shanghai: Putting the Kibosh on the Kaiser from theBund: The British at Shanghai and the Great War: Penguin Specials Kindle Edition

Robert Bickers is Professor of History and Director of the 'Historical Photographs of China' project at the University of Bristol. He is the author of Empire Made Me- An Englishman Adrift in Shanghai and The Scramble for China- Foreign Devils in the Qing Empire, 1832-1914.

Polonius
5.0 out of 5 stars Good reading.
Reviewed in Australia on 15 March 2021
Verified Purchase
Shanghai was unique in 1914. Never the same afterwards. The rise of Japan was on the horizon.
Well worth reading

Steve London
4.0 out of 5 stars A sharp and revealing contrast to Mark O'Neil's "The Chinese Labour Corps".
Reviewed in the United Kingdom on 18 June 2014
Verified Purchase
My earlier review of Mark O'Neil's, "The Chinese Labour Corps" was enthusiastic. My enthusiasm hasn't change, but after reading "Getting Stuck in For Shanghai" my understanding and appreciation has. Part of the great series by Penguin China to mark the centenary of the Great War, Getting Stuck in For Shanghai tells of how a reluctant cosmopolitan community in the Shanghai of 1914 tried to maintain good relations with each other, regardless of which side of the war they were on. This idealistic view of the world was perhaps made possible because, as everyone knew, it would be over by Christmas. But as the war spread over the years, and as rising numbers of those who had left Shanghai to fight were reported dead, the mood changed.

Against this backdrop the individual stories are told of the men who went to Europe (some for the first time) to fight for King and country. Bankers and community leaders, policemen and customs officers (Britain ran China's custom's service, but that's another story) and even down and outs. How they left, when the left, what boat the sailed on, where they were posted, where they were injured, hospitalised, killed on the battlefields, or as in one case, opened a newsagents in Bristol after the war. They number just a few hundred and we know so much about them. Yet of the Chinese who went to war, if truth be known, we know very little. We don't have accurate numbers of how many were recruited, arrived safely or even died. It goes without saying, therefore, that the fetes of those who were eventually repatriated, largely without exception, are unknown... even of the hundreds who were returned having lost their sanity, there is no record of their fete.

This shouldn't detract from the detail in Robert Bickers' book - at one level it is very impressive. But it is both the books strength and failing in my opinion. The book, like the others in the series, is short. There's not enough time to develop the characters whose lives are weaved in and out of at various points in Shanghai, en route to Europe, in Britain, in France, in death. Perhaps I am about to display my limited intelligence, but I confess to asking myself on more than one occasion, "which one is he again?" The overall effect, at least for me, was a felling that the pace of the book was being held back.

This is an unexpected vignette on the impact of the war in China, though truth be told, in the stories of the Shanghailanders and the war, China registers as little more than the scenery. This is the story of expats in splendid isolation from the local population, with lives that one can't help but conclude, were valued so much more than those locals.

Ultimately individual stories of loss and tragedy in war touch us, some more than others. But it is important that those stories are not forgotten. Sadly too late for the vast majority of the men of the Chinese Labour Corps, other than as parts of collectives, but Blickers does a commendable job for the Brits of Shanghai who went to war. Worth the read, and again, at 99p for the ebook a no-brainer.
Read more
3 people found this helpful
Report abuse

Martin I Quigley
5.0 out of 5 stars Five Stars
Reviewed in the United Kingdom on 15 December 2015
Verified Purchase
Very interesting read and an insight into China
Read more
Report abuse