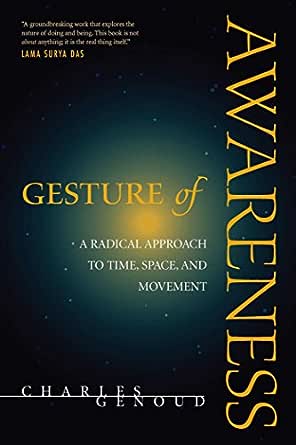 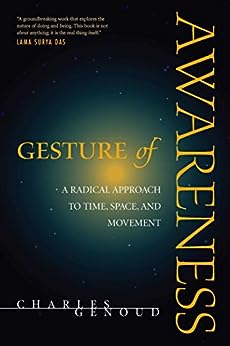 Gesture of Awareness: A Radical Approach to Time, Space, and Movement Kindle Edition

"Gesture of Awareness is a remarkable book. The elegant and incisive writing illuminates some of the deepest questions of the spiritual path: I and the other, oneness and duality, and what indeed lies beyond all concepts. These words are meant to awaken, not merely to inform, and they succeed admirably in their intention. The beautiful, haiku-like teachings stretch our minds and open many new levels of understanding. This is an unusual work and one worth many careful readings."--Joseph Goldstein, author of A Heart Full of Peace and One Dharma: The Emerging Western Buddhism

"Unlike many books that explore the meaning of spiritual practice, Gesture of Awareness is not an account or explanation of such practices but an expression of them. In succinct, poetic style, Charles offers a vision of human existence as it can be lived and embodied, once we take the risk to discard those concepts and assumptions that stand in the way of an immediate encounter with the present. Drawing on Buddhist texts, shamanism and the writings of thinkers such as Maurice Blanchot and Georges Bataille, Gesture of Awareness weaves insights from these diverse traditions into a coherent and compelling whole. At the same time, the text is a workbook that encourages the reader to engage with the material in a way that can make a real difference in his or her life. It is the kind of book that cannot be absorbed in a single reading and then shelved, but one that calls us to pay attention to its message again and again."--Stephen Batchelor, author of Buddhism without Beliefs and Living with the Devil

"A ground-breaking work that explores the nature of doing and being. This book is not really about anything; it is the real thing itself."--Lama Surya Das, author of Awakening the Buddha Within

"Charles Genoud is simply one of the deepest and most creative Dharma teachers I've known. I predict that this book will be a classic, much referred to and recommended by Dharma teachers in North America and Europe."--Lama John Makransky

Charles Genoud has been a practitioner of Tibetan Buddhism since 1970. He began his studies in Dharamsala, in the School of Dialectics, and was student and translator for the Venerable Geshe Rabten for over ten years. While Charles studied and worked with him in Switzerland, Geshe Rabten taught all four schools of Buddhist philosophy, and he taught Madhyamika philosophy, the Six Perfections, and the Lamrim Chenmo of TsongkhapaLater, Charles Genoud went on to study closely with Dilgo Khyentse Rinpoche and other teachers in the Dzogchen tradition. Charles Genoud has also practiced Vipassana meditation in Burma and India. Charles Genoud is co-founder of the Vimalakirti Center for Meditation in Geneva, Switzerland. He conducts meditation retreats in the United States, Europe, Brazil, and the Middle East. He is also an assoicate teacher of Lama Surya Das of the Dzogchen Foundation. He lives in Geneva. --This text refers to the paperback edition.

Joel Rosenblum
2.0 out of 5 stars Not the Buddha's dharma
Reviewed in the United States on 27 August 2015
Verified Purchase
Bought this book just because it was highly recommended, and I like to find clear expressions of the dharma so that I can suggest them to others.

Unfortunately, what I found in this book was a bunch of wonderings from someone who has not apparently had much insight into dependent origination & anatta. Mr. Genoud suffers even from the pre vs trans-egoic fallacy (which Ken Wilber loves to point out), almost equating the non-conceptuality of babies (as well as the Hopi tribe) with some type of awakened state. At one point, Mr. Genoud seems to deny the importance of Right View entirely, saying something like "what do we really know about awakening, anyway? How do we know that Christians don't awaken just as well as Buddhists?"

The author was really into the whole non-conceptual thing, but that is a trap until you have right view. After all, right view is a conceptual device. It is the "raft" that leads to the "other shore" (nibbana). The other shore is not just non-conceptual. It is without center or background, no splitting of awareness from appearances, no more reifying process into objects, nor more subsuming all into one, as everything is disjoint yet infinitely interpenetrating.

Instead of trying to generically "be here now" (which can be done while doing all kinds of unskillful things), try to realize that nobody is here in the great natural & automatic perfection. Be here now in this effort to wake up from the delusion of identity.

I am not affiliated with this blog, but I gained tremendous benefit from it, so let me just suggest that you google "Thusness six stages of awakening," and read the various important articles on the blog housing that very important article.
Read more
4 people found this helpful
Report abuse