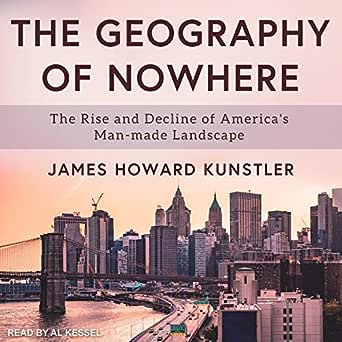 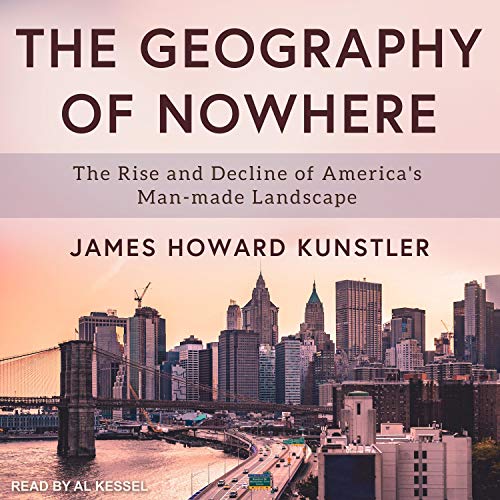 The Geography of Nowhere: The Rise and Decline of America's Man-Made Landscape

4.5 out of 5 stars
4.5 out of 5
155 global ratings
How are ratings calculated?
To calculate the overall star rating and percentage breakdown by star, we don’t use a simple average. Instead, our system considers things like how recent a review is and if the reviewer bought the item on Amazon. It also analyses reviews to verify trustworthiness.

Nick Marshall
5.0 out of 5 stars A brilliant and lucid look at the way that the motorcar and its effect on how we live may be coming to an end
Reviewed in Australia on 2 October 2014
Verified Purchase
A terrific book and sobering reminder of how easily our enthusiasms can overwhelm us. While I agree that the dominance of the car in modern life has led to a situation that is unsustainable, it is hard to see how it will be fixed in a sensible way.
Not everyone will agree that the suburban way of life is so bleak compared to the way things were a few decades ago because most are too young to know and accept the mess that modern urban life is as normal.
The writer describes the growth of the US and how land use, architecture, building methods and technology have brought the US to a position where the cost of the built infrastructure has become overwhelming to maintain and how the resulting destruction of real communities has enormous costs too. He explains how things came to be in such beautiful lucid sentences.
I know of few other writers who can explain things so well but with a cutting edge of irony and not without humour.

J. Minton
5.0 out of 5 stars Visit the US for more than a vacation, and this book will make absolute sense
Reviewed in the United Kingdom on 4 April 2014
Verified Purchase
About a decade ago, James Kunstler gave one of the most engaging, intelligent, witty, impassioned, subtle, and also sweary TED talks I've ever seen. He's never been invited back.
About a decade and a half before that, he wrote the Geography of Nowhere. The book swings between chapters offering careful historical analysis of the factors which led to the development of modern North American sprawl, and chapters bristling with the biting sarcasm and fomentation seen in the talk. As long as this oscillation in style is chalked up as a genuine expression of the author's feelings as well as thoughts, rather than a flaw or inconsistency, then the reader is unlikely to be disappointed with the book, if not the urban environment it so accurately and painfully describes.

geiger c0unter
3.0 out of 5 stars Insightful but reactionary
Reviewed in the United Kingdom on 21 November 2014
Verified Purchase
Interesting insights into America. Can't help but think that author can't see that human expectations change and at least in part we fashion cities how we want them in the context and of a material world we think we want. Perhaps there are alternatives, but there aren't enough of these posited.
Read more
Report abuse

Anthony
5.0 out of 5 stars Five Stars
Reviewed in the United Kingdom on 5 December 2016
Verified Purchase
Kunstler is an excellent writer and this is an excellent book.
Read more
Report abuse

Carlo Ienna
5.0 out of 5 stars A compelling book that carefully explains the urban build up of North America and it's problematics
Reviewed in Canada on 8 December 2015
Verified Purchase
The book was delivered even before the estimated time. It's a good reading for all those who are curious to understand why North America landscape and architecture has been built the way it is: the bad historical decisions, the bad political decisions, and the psychology that is affecting major metropolis and the social aspects of suburbia. It's a must read for all those in the field of architecture, design, and urbanistic. James Kunstler writes the truth on topics that affects society with the era of the exploit of cheap oil and the drive-through lifestyle it has spawned.
Read more
Report abuse
See all reviews
Get FREE delivery with Amazon Prime
Prime members enjoy FREE Delivery and exclusive access to movies, TV shows, music, Kindle e-books, Twitch Prime, and more.
> Get Started
Back to top
Get to Know Us
Make Money with Us
Let Us Help You
And don't forget:
© 1996-2020, Amazon.com, Inc. or its affiliates